The political landscape has altered significantly since Cities Outlook 2015. A Conservative government is now implementing its manifesto commitments, from rebalancing the public finances to passing power down from Whitehall to town hall.

Against a backdrop of an economy that continues to grow, two big issues are likely to shape the current parliament. The first is the government’s ambition to reduce public expenditure while still supporting economic growth. The second is the cross-party consensus that future national prosperity should be of benefit to all people and places across the UK.

To deliver in these areas, the government has set itself the challenge of creating a higher wage, lower welfare economy, in part by devolving power and funding from Whitehall to city-regions and providing investment to strengthen the ‘Northern Powerhouse’ and other regional economies.

Increasing wages while reducing welfare expenditure was at the heart of the 2015 Budget and subsequent Spending Review. This was encapsulated by the Chancellor’s announcements of a ‘National Living Wage’ at the same time as reducing working tax credits and cutting the overall welfare budget by £12 billion.

These policies are a response to the challenge that, despite there being 1.3 million more jobs in 2014 than 2010 (980,000 of which were in cities) the real value of wages earned in 2014 was 5 per cent lower than in 2010. This has resulted in a squeeze for many households; one compounded by the geography of jobs growth, with London alone accounting for 43 per cent of all jobs growth in the four years to 2014.

Debates continue about whether the ‘National Living Wage’ will compensate for cuts in working tax credits, with the Institute of Fiscal Studies (IFS) arguing there will still be a hole in many families’ finances.1 There is also further discussion needed about the role of welfare expenditure in both supporting the most vulnerable (e.g. for those with disabilities) and helping people close to the labour market (e.g. top-ups for low wages, childcare support) while avoiding subsidising low paying employers or creating disincentives to work.

But as the policy agenda unfolds, there is an increasingly clear link between creating a higher wage, lower welfare economy and the government’s commitment to devolve more powers to cities.

Devolution has continued to gain momentum since the Chancellor set out his initial vision in July 2014 and announced the range of new powers for Greater Manchester in November 2014. Devolution, and the Northern Powerhouse, also featured in the Chancellor’s first speech after the May election. Since then Greg Clark, the new Secretary of State for Communities and Local Government and long-standing champion of devolution, has been working with city-regions to agree further Devolution Deals.

Five deals have been announced to date, with the Sheffield City Region, the North East, the Liverpool City Region, the West Midlands and Tees Valley agreeing to have directly elected metro mayors in exchange for greater powers over transport, skills, enterprise and labour market programmes, as well as additional funding. These deals are important steps towards providing cities with greater powers to adapt policy to their specific challenges. The hope is that, as has been the case in London and more recently Greater Manchester, more powers, funding and influence will flow to these areas over time.

Alongside these Devolution Deals, the local government funding settlement has also been radically reformed. In addition to managing further funding cuts (significant but less steep than initially feared), cities will have to adapt to a funding environment that is much more dependent on locally generated growth-based revenues – council tax and business rates – and much less reliant on central government needs-based grants. 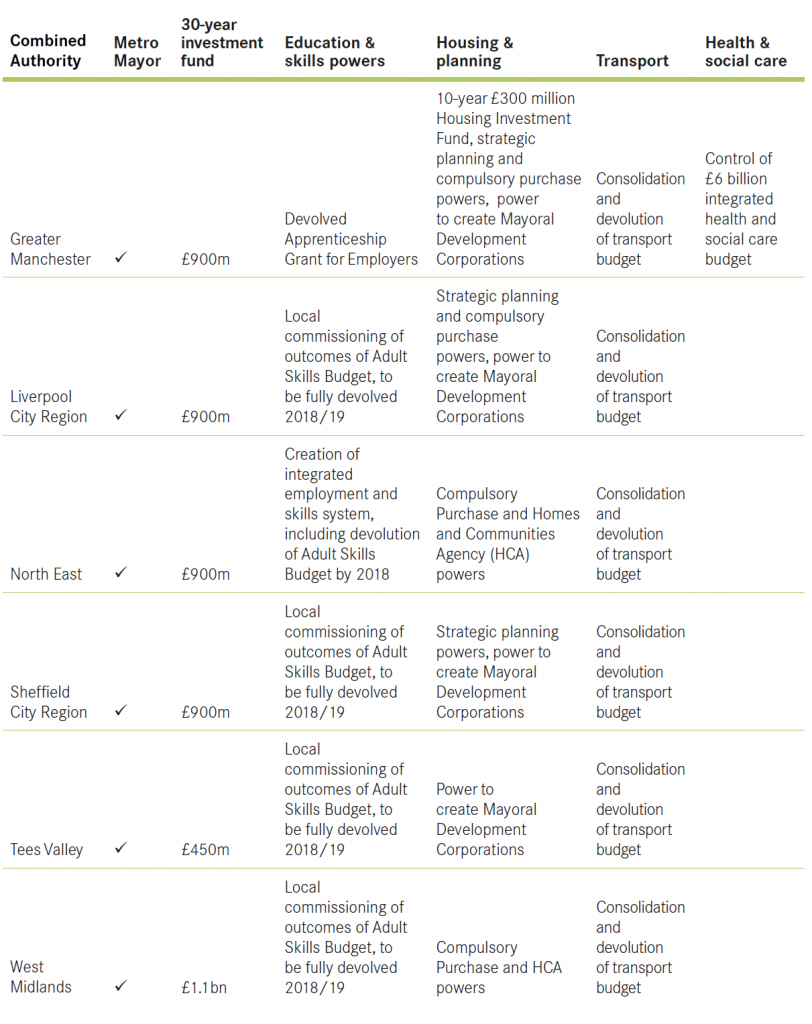 The elevation of cities policy to the forefront of the government’s growth agenda is significant and overdue in a country as centralised as the UK. But cities will be key to delivering other policy priorities too.

This is particularly important when it comes to reducing public expenditure, including the welfare bill. The siloed nature of public spending, by policy area and government department, has encouraged inefficiency and duplication. Given the scale of the government’s ambitious public expenditure agenda, devolving more public service budgets to city regions offers the best chance of achieving the greater savings, reforms and improvements required.