04How do housing shortages drive inequality between and within cities?

The outcomes above have distributional impacts. Specifically, they redirect wealth to the owners of homes in high-demand cities. This not only increases inequality between homeowners in different cities, but it also increases housing costs for renters in those expensive cities.

Provided they are not in negative equity, homeowners all possess some housing wealth. For example, homeowners in Brighton and Hull each have considerable housing wealth – on average £300,000 and £73,000 per house in 2018 respectively. This wealth can grow in two ways. Either mortgaged households can pay off their mortgage, or the price of their house can increase.

Homeowners experience a ‘forced saving’ effect when they consume housing by paying off their mortgage as they are building up their housing equity.11 And owning a house acts as a savings vehicle. This applies to all mortgaged homeowners who are not on an interest-only mortgage (with the size of this forced saving being larger in places where housing is more expensive).

In contrast, homeowners in successful city economies are not just experiencing the forced saving effect by paying down their mortgages, they are also seeing the price of their house increase because housing supply in expensive cities bears no relationship to local demand. This scarcity is inflating the value of their asset, gifting them an increase in wealth.

Housing shortages sharpen inequality for renters, who tend to be younger

Growth in homeowners’ wealth is linked with rising rents. Figure 8 shows that growth in average housing wealth in cities is associated with growth in cities’ rents. This means that renters in cities with rapid rent growth are not just becoming poorer relative to their landlords, but that they are becoming poorer relative to their homeowning neighbours. Not only do these homeowners have a hedge against the increasing housing costs that renters are facing in the city, but they are also pulling away from renters thanks to the rapid growth in their
housing equity. 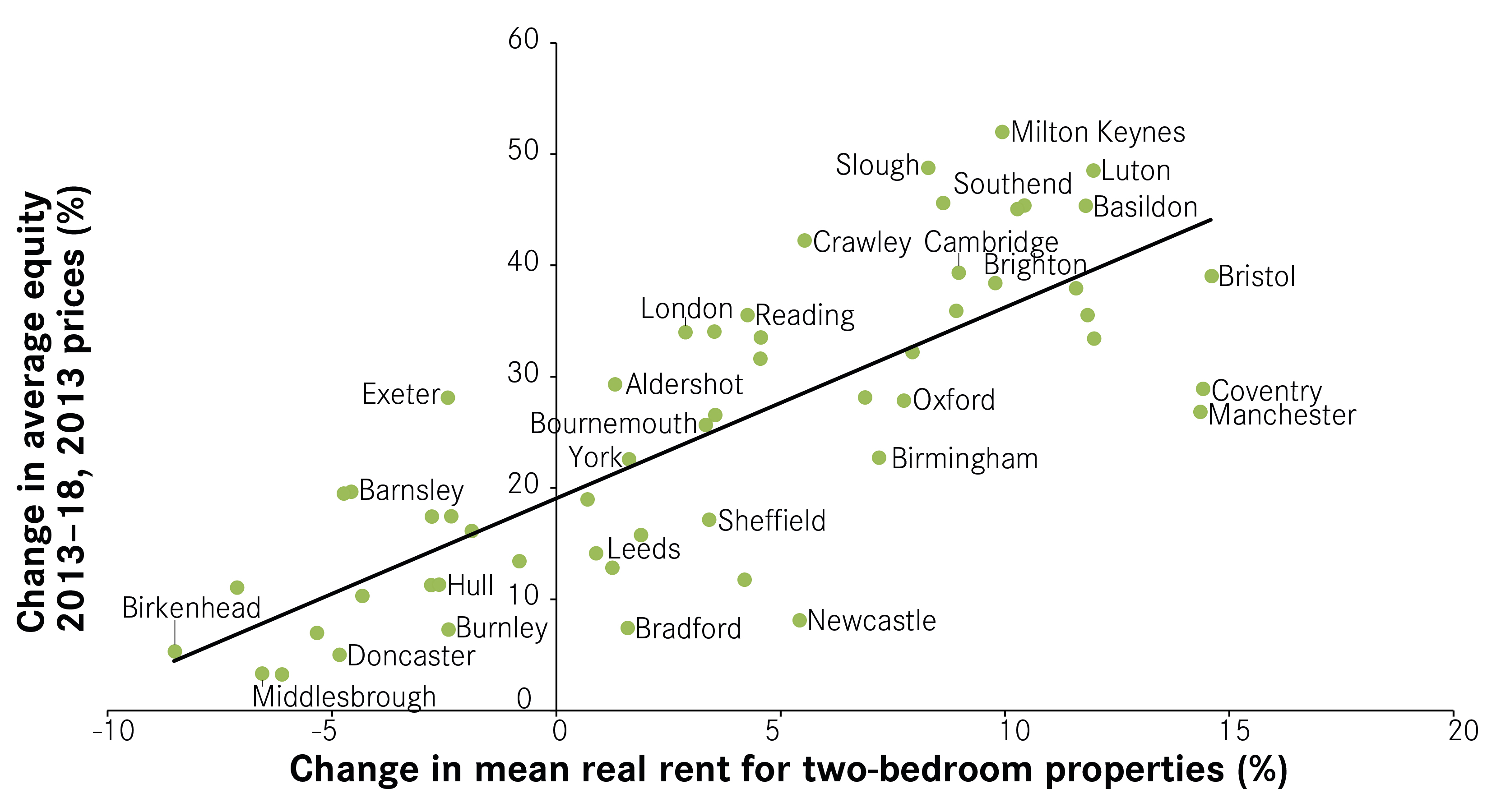 Due to the connections between high housing wealth, rents, and wages, renters face a dilemma. Either they can earn high wages but pay higher rents and face expensive home ownership in productive cities, or they can experience lower rents and cheaper home ownership in return for lower wages in cities with weaker economies and slower housing equity growth. Regardless of what they choose, renters in 2019 find it difficult to build wealth due to rising rents, even if they try to invest in an alternative asset class like equities or bonds.

These costs of higher rents and decreased housing affordability in high-income cities fall mostly on younger households. Figure 9 shows how the differences in home ownership across England and Wales are driven by the under-50s, with more expensive and higher-wage cities in the Greater South East tending to have lower home ownership for such households. In contrast, there is no relationship between local economies and home ownership for people aged 50 or older, as they are likely to own a home wherever they live.12

Figure 9: Home ownership for under-50s as a share of those in private housing, 2011 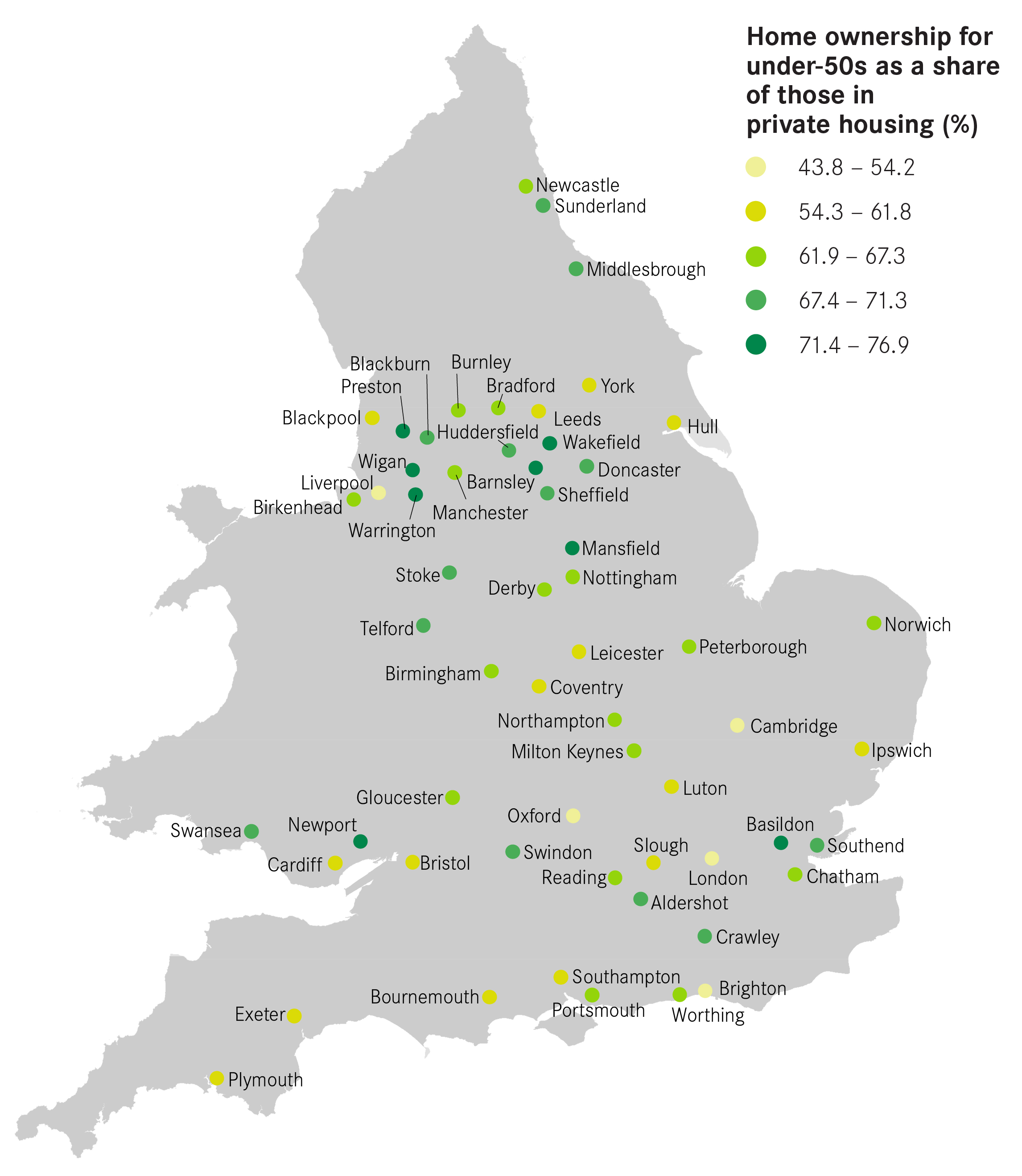 As a result, Britain’s use of housing to build wealth drives inequality across the generations. Even though housing wealth is driven primarily by a local economy’s ability to provide high-paid work, the economic benefits of cities with high wages are not being fully retained by renting households in work. Rather, they are flowing to homeowners, many of whom are retired and outside the labour market. For these renters to see more of the benefits of their cities’ high average wages, the city’s supply of housing would need to be more sensitive to demand, and equity growth for homeowners would need to slow.