03What drives changes in demand for skills?

Major changes in the economy – technological change, globalisation and demographic change among others – are affecting demand for skills in two ways. Firstly, they have changed the type of jobs people are doing, both in terms of job titles and the tasks they involve. Secondly, they have changed the type of skills required within existing occupations, meaning that for some occupations the job title has stayed the same but the job description has changed.

These trends are expected to continue in the future, meaning that analytical and interpersonal skills will become even more important. The shift towards a service economy will continue, with creative and media related occupations, health, education and local services occupations (such as food and hospitality and sport and fitness occupations) all likely to grow in demand in the future.4

Technological innovation has meant that many routine tasks are now done by machines and that some occupations, particularly those related to manufacturing, are now more orientated to overseeing and interacting with
those machines.

These changes serve as an important reminder that changing occupational and sectoral profiles will only provide a partial picture of the way in which demand for skills is changing.

Box 4: The change in skills demanded by assemblers (vehicles and metal goods)

Assembler jobs are among the ones most at risk of displacement. Overall, the total number of assemblers declined by almost 20 per cent between 2006 and 2016. Yet the nature of the skills required by assemblers has also changed across the decade.

In line with broader shifts, the requirement for assemblers to have interpersonal skills almost doubled between 2006 and 2016, while their need for physical skills declined by 46 per cent (see Figure 7). In particular, persuasion and social perceptiveness – skills that were only marginally important for assemblers in 2006 – have grown the most in importance. While operation monitoring and quality control analysis continue to be the most important skills for assemblers, they have decreased in importance over time by respectively 25 and 35 per cent.

These changes have taken place as the role of assemblers has become less about putting things together, and more focused on maintaining and interacting with machines that are assembling items. 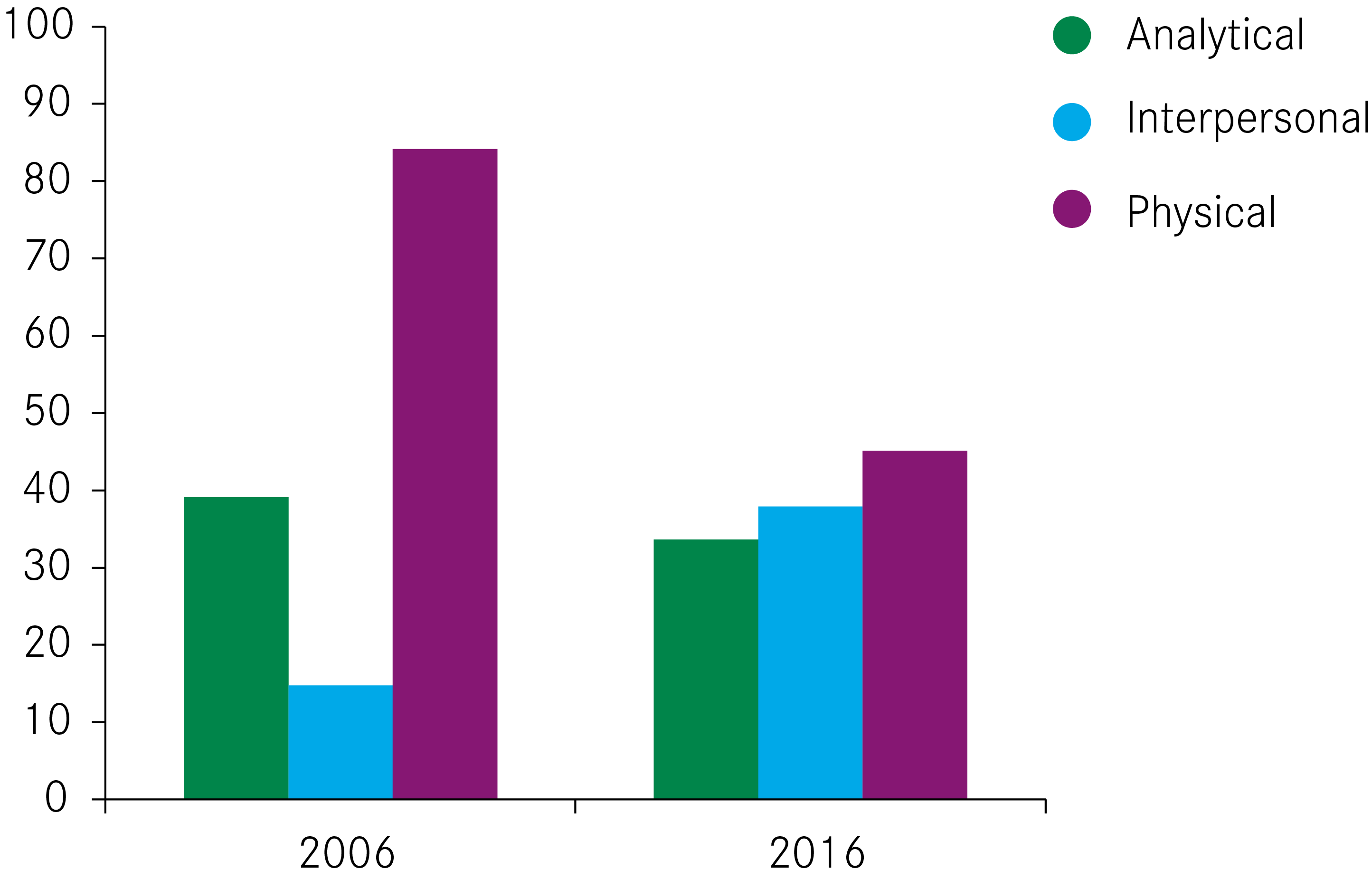 This has two important implications for policy-makers. Firstly, jobs that are considered at high risk of disappearing might not in reality disappear; rather, the skills required by these jobs will change. This suggests that jobs might be less vulnerable to automation than one would think and therefore policy should not overly focus on job losses. Secondly, it underlines the importance of analytical and interpersonal skills even in those economies where there are fewer jobs that would typically use these types of skills. Hence, interpersonal and analytical skills should sit at the core of education from the early years through to
adult education.