02How is demand for skills changing in cities?

Demand for skills varies across the country

In 2016, interpersonal and analytical skills were in greater demand than physical skills in every city in Britain. Within these broad groups, some of the most important interpersonal skills are active listening, speaking and social perceptiveness, while the most important analytical skills include critical thinking, reading comprehension and monitoring. These skills play a significant role in almost every occupation and were the most in demand in every city. In contrast, installation, repairing and other physical skills were among those least in demand in 2016.
However, the magnitude of the demand for the different skills groups varies across the country. Demand for analytical skills in 2016 tended to be higher in cities in the Greater South East, including Cambridge, Oxford and Reading; whereas physical skills were in higher demand in cities in the North and Midlands, such as Derby, Mansfield and Middlesbrough (see Figure 1).

These differences reflect broader variations between these urban labour markets and the types of occupations most prevalent. For example, physical skills are more important in manufacturing and trade occupations, such as plant and machine operatives and metal workers. These occupations are in higher demand in some cities, particularly those in the North and Midlands.

Demand for interpersonal skills is more evenly spread out across the country but is particularly high in cities such as Cambridge, Edinburgh, London and Oxford. This can be explained by the significance of higher education and other knowledge-intensive service sectors in these cities and the importance that social skills play in these jobs. 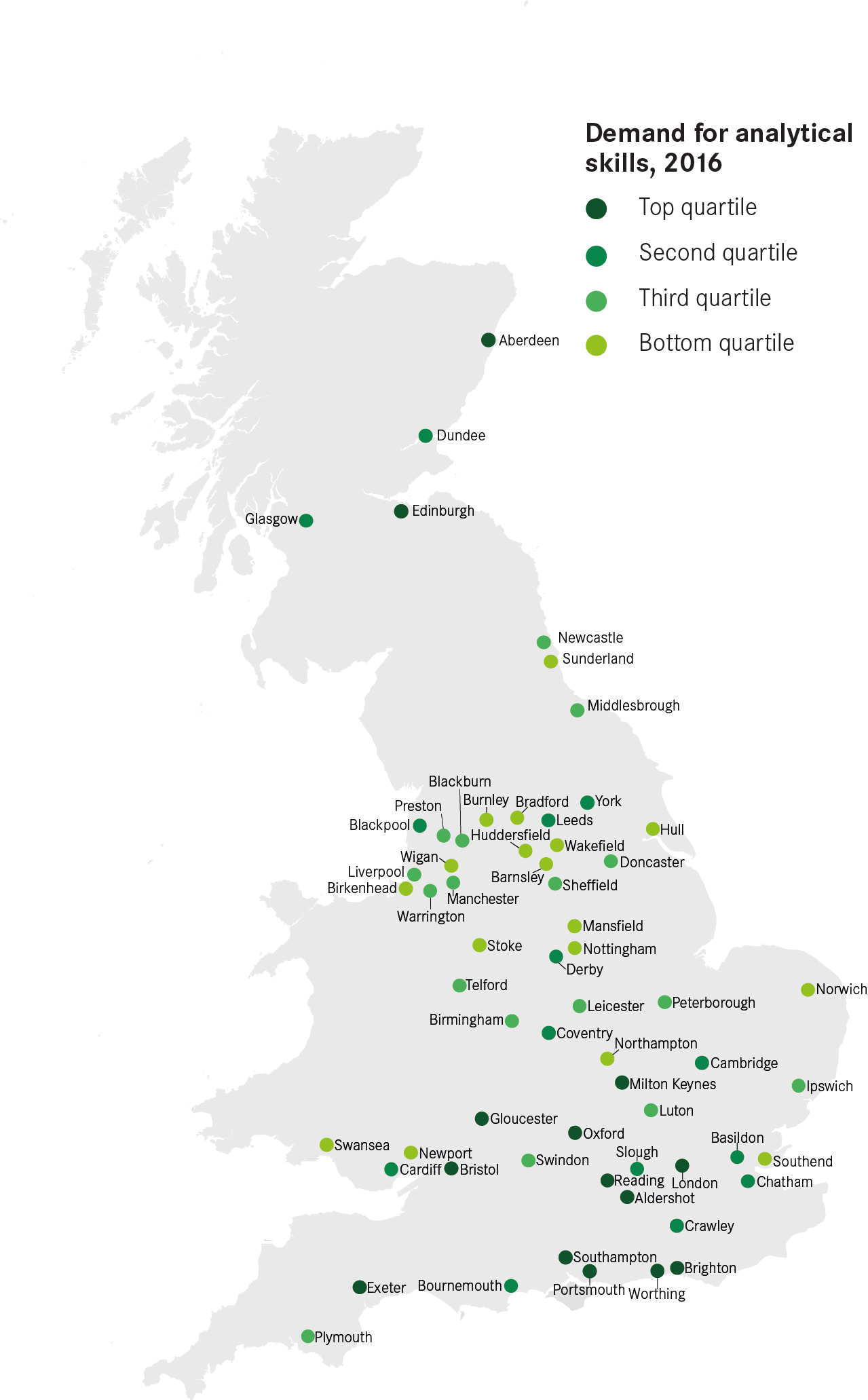 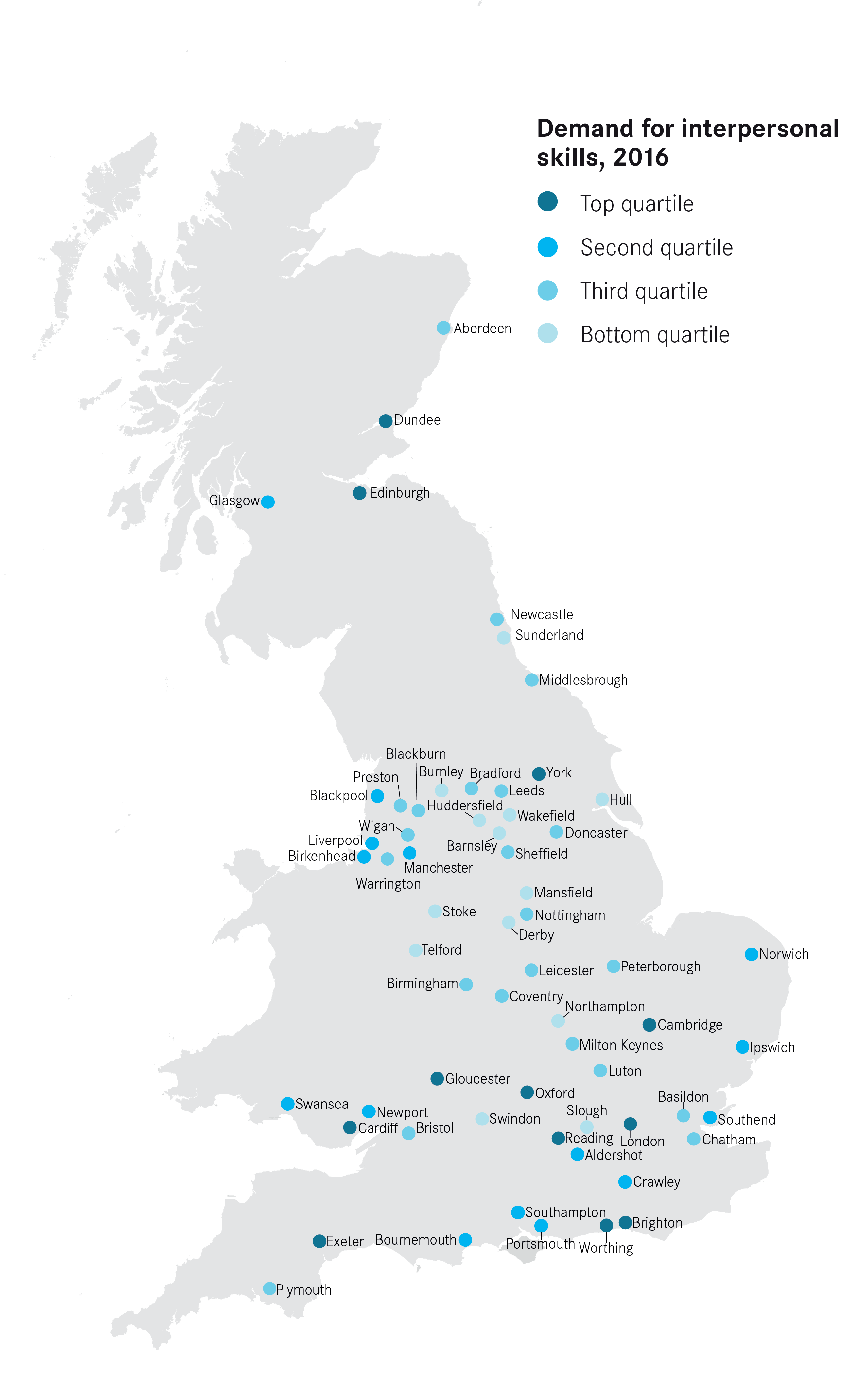 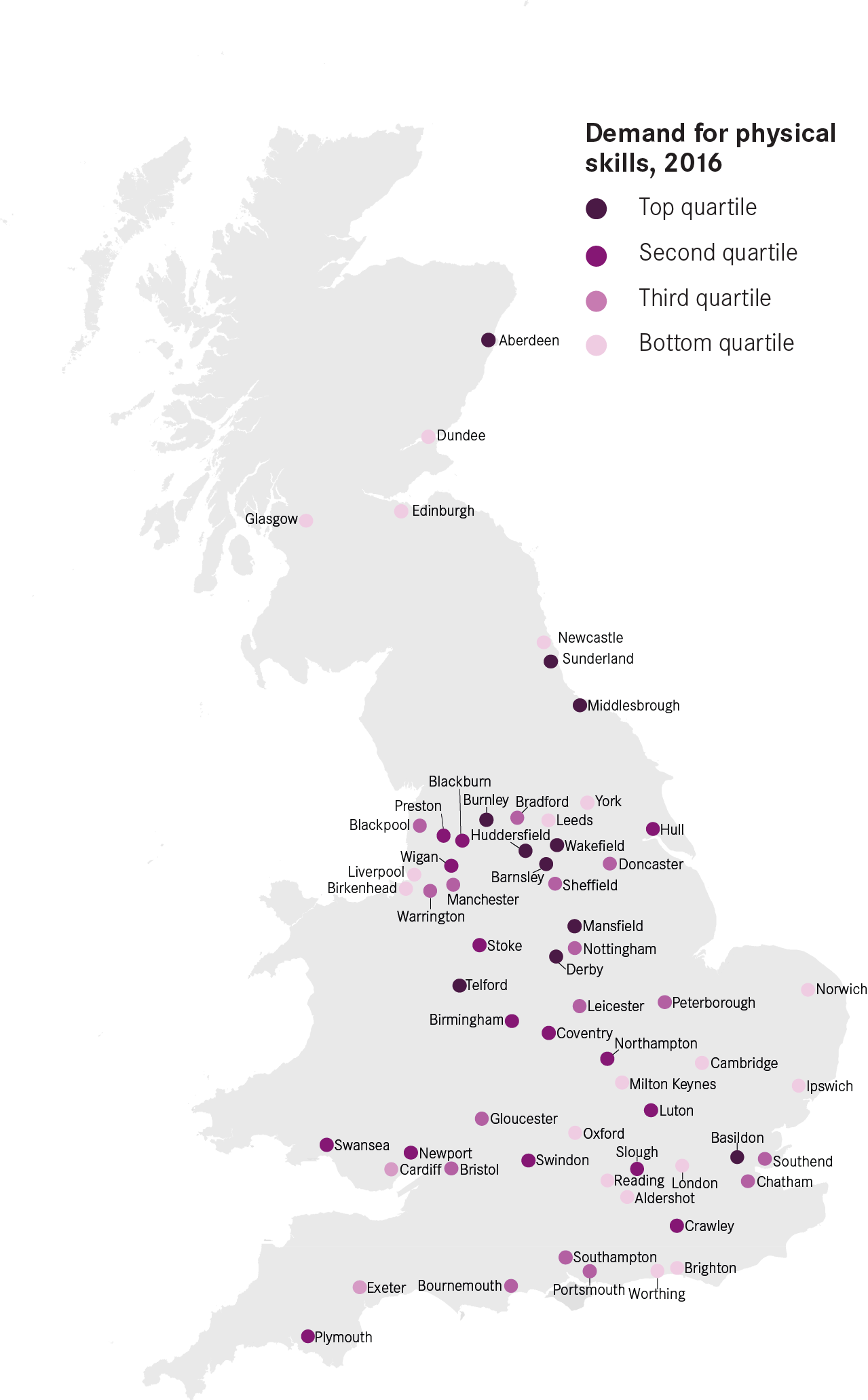 Box 2: Demand for skills in Oxford and Stoke

Oxford and Stoke have very different labour markets and these differences are reflected in the demand for skills (see Figure 2).

Among UK cities, demand for interpersonal and analytical skills is highest in Oxford. This in part reflects the importance of the education sector in the city. Higher education and further education professionals are among the top five most popular occupations in Oxford, relying heavily on interpersonal and analytical skills. On the other hand, Oxford has the lowest demand for physical skills, reflecting the relatively small proportion of routine, manual jobs in the city.

Figure 2: Difference in demand for skills in Oxford and Stoke compared to the urban average, 2016 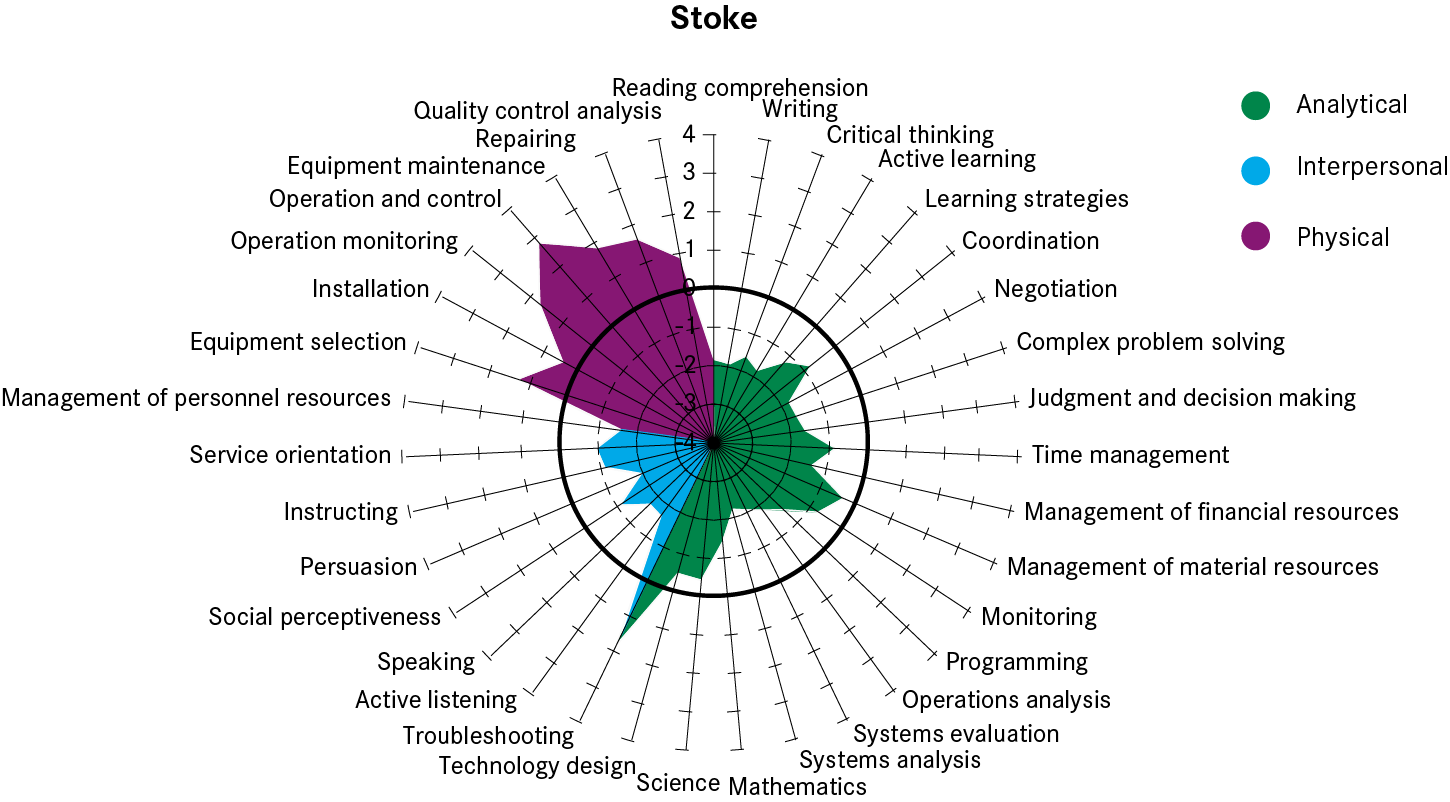 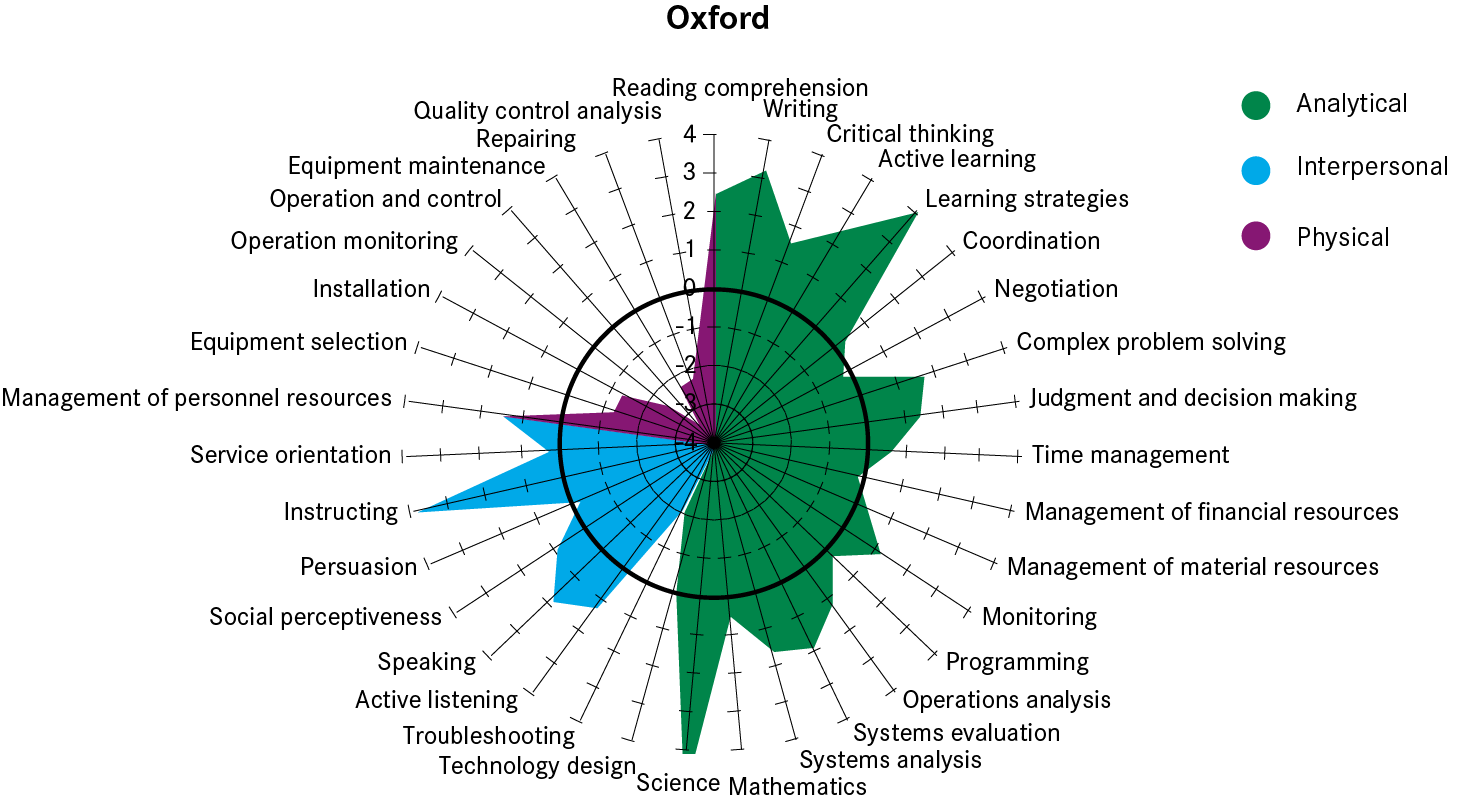 Figure 3. The relationship between demand for analytical and interpersonal skills and demand for physical skills (left) and GVA per worker (right), 2016 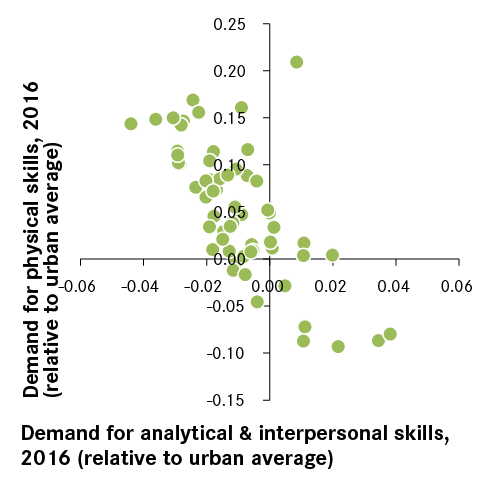 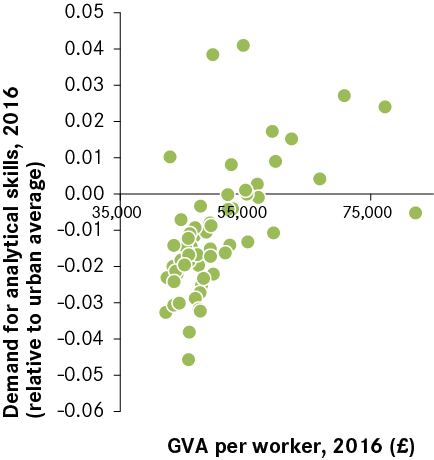 There is variation between more specific types of skills, however. All interpersonal skills increased in demand over the 10 years, with demand in persuasion, service orientation and negotiation skills increasing by more than 70 per cent. In contrast, only operation monitoring increased in demand among physical skills. These changes are reflective of the way technology is transforming the world of work. Automation has meant that tasks requiring physical skills are now more easily carried out by machines, but robots cannot easily replicate
interpersonal skills.

Growth in analytical skills has been more varied. Analytical skills related to ‘technology creation’, such as technology design and troubleshooting, have become relatively less important, whereas those related to the use of and interaction with technology, such as programming and complex problem solving, have become more important (see Figure 4). This is likely to reflect the increasingly widespread use of technology in work and the increased importance of skills that complement this. 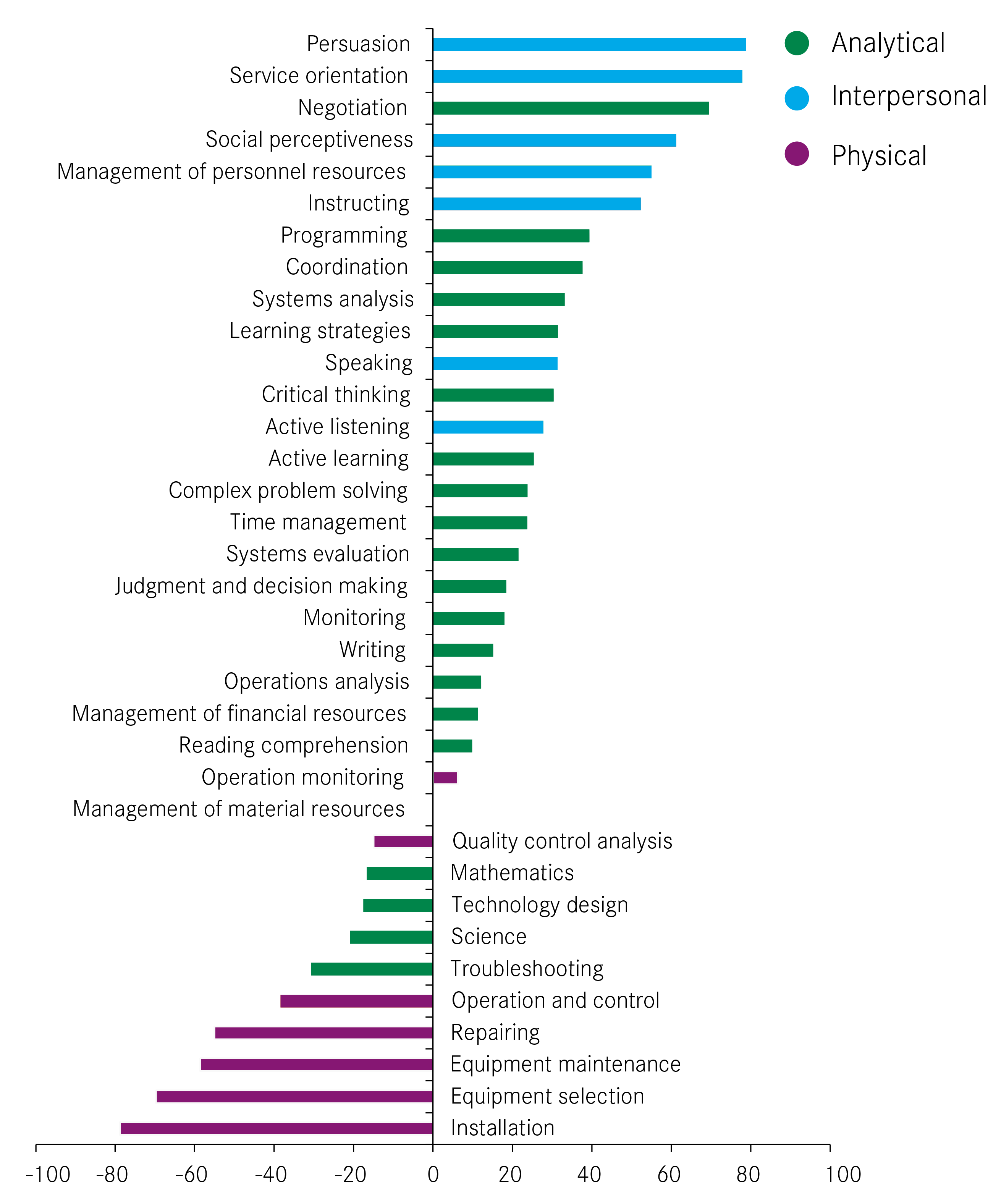 Programming was least in demand of the 35 skills in 2006, but has seen one of the largest increases in demand over the decade as part of the shift towards skills needed to interact with and oversee technology.

Jobs in occupations most likely to require programming skills saw a big increase between 2006 and 2016. The number of web designers and IT analysts increased by a third, while the number of programmers increased by almost 40 per cent. These occupations tend to be highly-paid, with average salaries around £40,000 and over.

Demand for these occupations continues to increase. Job postings data from Emsi shows that more than 33,500 software engineering jobs were advertised in cities in the last two years. The majority of these were jobs in cities in the South, with over a third in London
(see Figure 5).

Skills demanded in these roles tend to be similar across the country: software engineering and programming language are the most frequently referenced. Demand for sector-specific knowledge in these roles does vary, however, reflecting variation in the sectoral profile of cities. For example, knowledge of the oil and gas industry is among the skills most frequently required of software engineers in Aberdeen. In contrast, more emphasis is put on knowledge of testing and engineering in Coventry.

This serves as a reminder that while analytical and interpersonal skills are increasing in importance across the economy, sector or job-specific knowledge remains important. These variations highlight the need for skills systems that respond to local demand. 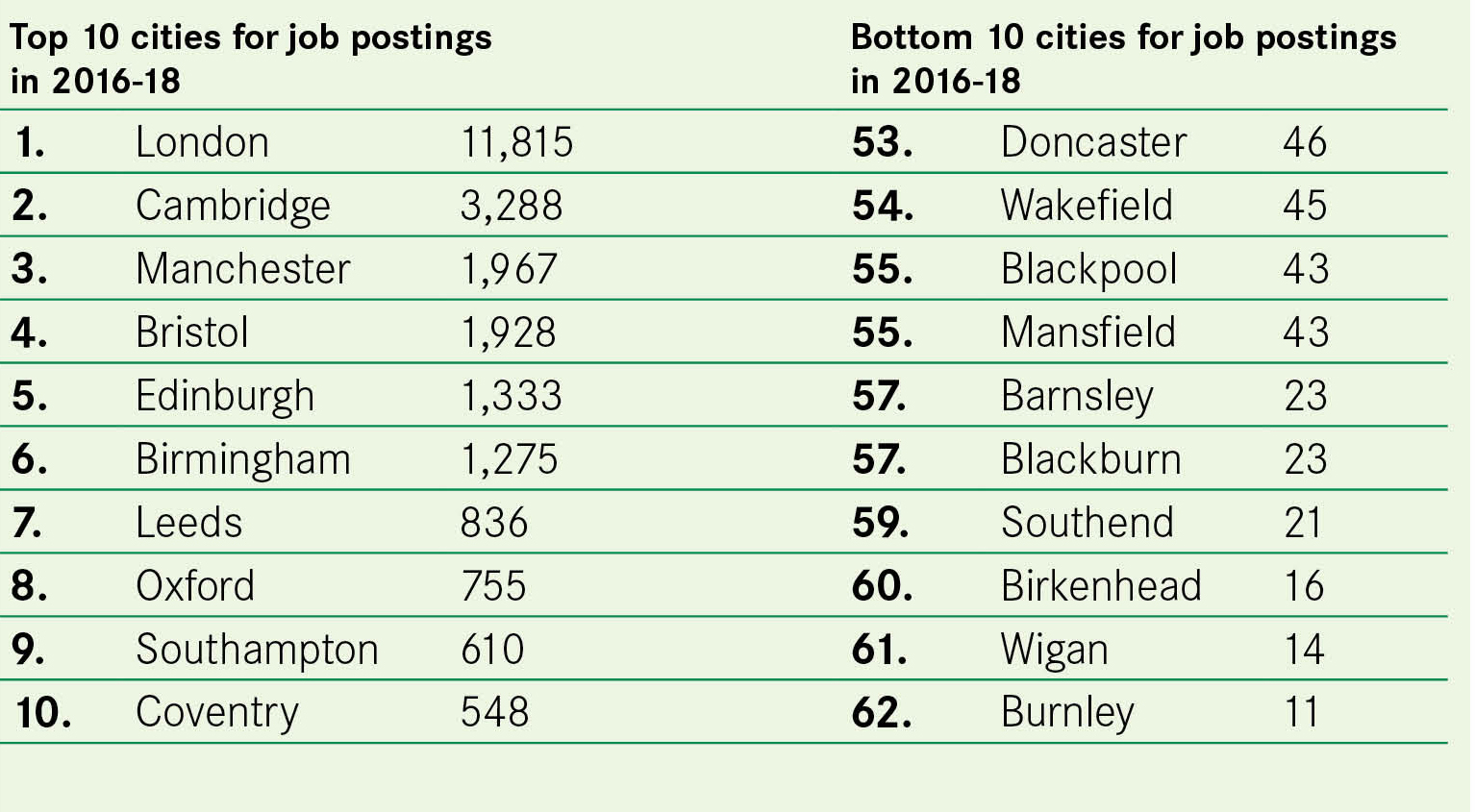 These trends play out across all cities. Demand for physical skills declined in importance in every city, while analytical and interpersonal skills grew in importance everywhere.