Demand for housing in the UK’s most economically successful cities has risen inexorably over the last three decades. Globalisation of trade, reduced transport costs and a restructuring of the economy has led to business investment, better paid jobs and wealth concentrating on those cities which have retained a highly skilled workforce. This growing demand is reflected in rising house prices.

The failure to build more homes in the country’s most successful cities has a significant impact on individuals. It drives up the cost of housing and makes it unaffordable for people to live and work there. Expensive housing reduces people’s mobility, a key component of helping people access opportunities, as well as a city’s and the country’s economy. When house prices vary as much as they do in the UK, it means people who wish to do so cannot move to more productive cities to take up new jobs, or start a business.

The rising costs of housing in economically successful cities – at least in part a result of planning policy decisions – has also seen homeowners’ wealth grow much faster than elsewhere. Subsequently, they will have greater access to capital through borrowing collateral or equity release. Indeed, for many homeowners in successful cities an annual rise in house prices ‘earns’ more than their income.17 Clearly there is a divergence in wealth between homeowners in these cities and ‘the rest’. This can widen inequalities with implications for the economy as well as individuals.

Businesses in the UK’s most productive cities are affected too. Expensive housing makes it difficult for businesses to set up and trade from the most successful cities and makes it more challenging for firms to access the workforce they need. Therefore workers find it harder to find the jobs that best match their skills. The London Chamber of Commerce now highlights housing costs as the biggest threat to economic competitiveness.18 More than half of London businesses say the cost of and access to housing is impairing recruitment, particularly for entry level roles19 (this is also the case in Bristol20 and Oxford21).

Housing costs also affect the amount of money people have to spend in those cities. Businesses must pay higher wages to keep their workers, reflecting their cost of living. For individuals, even though incomes may be higher in those cities, those who can afford to live there are forced to spend a much larger amount of that income on housing, rather than in local restaurants, shops or services.

In contrast, areas which allow for more house-building – like Milton Keynes22 – have lower living costs, which frees up more income for expenditure on things other than housing. A worker in Milton Keynes earns on average £28,600 whilst the average house price is £209,600. While a worker in London earns a significantly higher average wage, £33,000,23 the average cost of a house is more than double, £458,400.24 Therefore a Londoner moving to Milton Keynes will – despite taking a 14 per cent pay cut – likely enjoy a higher disposable income.

Ultimately a lack of house-building in high demand and unaffordable cities impacts on the national economy. Research from economist Enrico Moretti shows that there are significant productivity and welfare gains at the national level from enabling people to live in, or near to, a country’s most successful cities. The study found a lack of new housing in the most productive US cities between 1964 and 2009 meant that national output was 13 per cent lower than it could have been at the end of this period.25 In the UK, three of the top five most productive cities are also amongst the least affordable cities26 to own a house in (Figure 1) – the exceptions being Aberdeen and Milton Keynes. 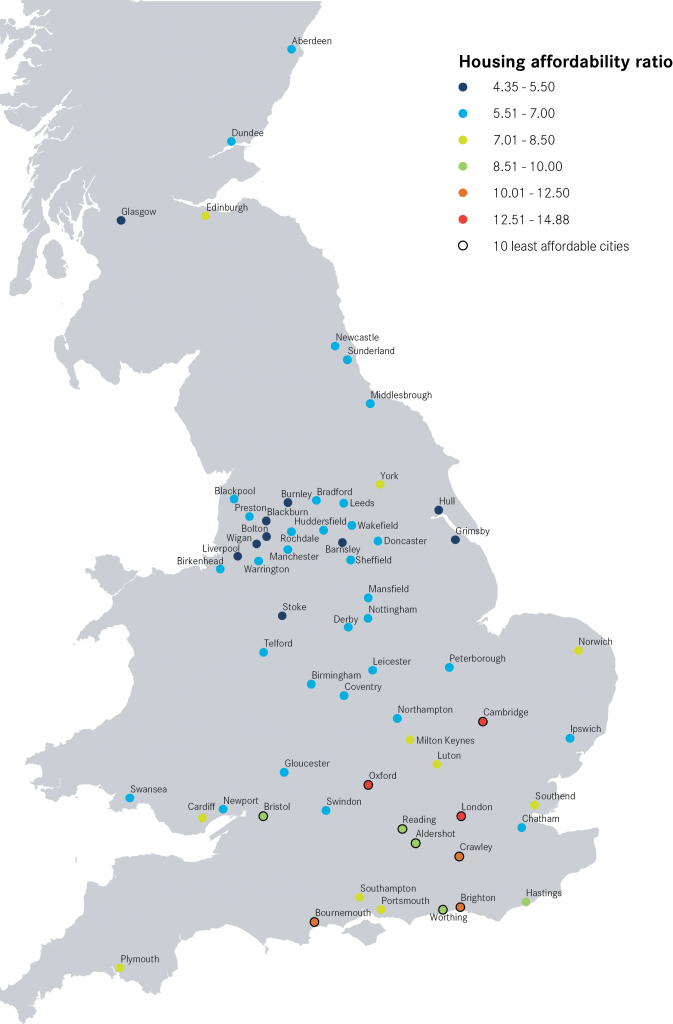 This is a problem that can be tackled, and the benefits of ensuring house-building matches demand for homes is evident in Milton Keynes. Not only has it been one of the UK’s strongest city economies in recent years, unlike other strongly performing cities, its house prices are below the English average. This is because supply has moved broadly in line with demand. The city had the strongest population growth of all UK cities (over 17 per cent) between 2001 and 2011. But alongside this growing demand, housing stock increased by 18 per cent.27 This has made it easier for people to access the homes and jobs that sustain the city’s economy.

As the Milton Keynes example shows, housing of the right type and quality, in the right place, can attract and retain residents, supporting jobs and the city economy. But the under-supply of homes has been a long-term and systemic problem for the UK. Overcoming this and building the homes that many places and people need requires bold national as well as local political leadership. Cities need to evaluate their local areas to consider different types of land that is close to existing settlements, jobs and infrastructure and in an appropriate location for housing. This requires a more flexible approach to the designation and use of land, one that considers the merits of land irrespective of its past planning designation.

Strategic Housing Market Assessment (SHMA) figures are usually calculated on the basis of household projections and adjusted for delivery of affordable houses, to address past under-provision, and to support expected growth in jobs. However, this calculation of ‘need’ does not always fully reflect the spill-over demand from the UK’s most successful cities.28

Although land prices are taken into account for SHMAs, Cheshire and Sheppard suggest that planning authorities should distinguish the premium in land prices for different uses, using this as an indicator for the land use that is in demand.29