03Where are we now: business rates devolution

In 2020, business rates will be devolved to local government and will replace the current formula grant funding system. This will give cities greater control over, and an increased reliance on, a growing tax base, which will significantly increase the financial rewards available from supporting economic growth.

How is the system changing?

Business rates, officially known as Non-Domestic Rates, were worth £23 billion in revenues in 2014-15, the equivalent of 14 per cent of the total spent by local government in England.

Typically business rates have funded the formula grant element of the local government funding settlement. Prior to 2013, this was made up primarily of Revenue Support Grant and a small element of redistributed non-domestic rates. The current system, introduced in 2013-14, is made up of a smaller needs-based revenue support grant element and half of business rates revenues. These are are retained by local government and redistributed between local authorities subject to a complex system of top-ups, tariffs and levies.

In 2019-20, the current business rates funded portion of local government funding will be replaced entirely by the total revenue raised from business rates.27 Under the new system, local authorities will be able to reduce the rate at which businesses are taxed and, conditional on having an elected metro mayor in place and subject to a local vote of the LEP, city-regions will be able to raise the rate up to 2 per cent in order to fund infrastructure improvements. If the city-regions that recently agreed devolution deals ahead of the Spending Review had been able to adopt such a precept this year, they could have raised £76 million to spend on infrastructure investments that support local businesses and economic growth.28 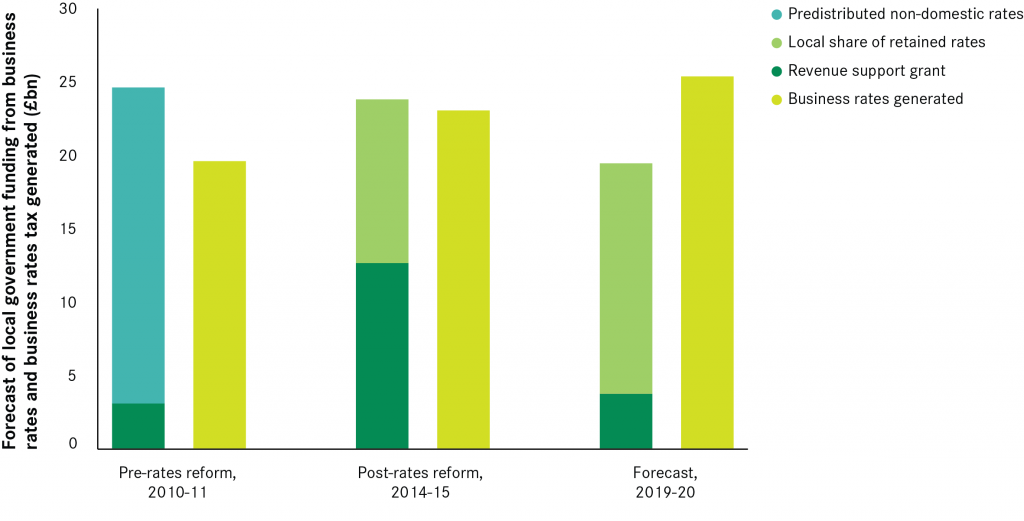 Since the Chancellor’s announcement in October 2015 there has been considerable debate about the likely winners and losers once the amount local authorities have to spend is more closely connected with their ability to generate tax revenues.

Figure 5 shows in which authorities more or less was generated in business rates than was allocated through revenue support grant and redistributed retained rates in 2014-15. In 145 local authorities, more business rates revenue was generated than was received in funding, while the reverse is true in 181 local authorities where less is generated. However, it is important to note that the map of net recievers and contributors to the system does not, and will not, reflect the outcome of the shift to the new funding system.

The new system does not mean that each local authority will simply retain what it raises in business rates locally. Athough the detail of the new system has yet to be announced, the government has been clear that a system of top-ups, tariffs and safety nets will continue to redistribute revenues from those that generate the most to those authorities that generate the least from business rates.

Figure 5: Net contributors and recievers in the ‘formula grant’ system 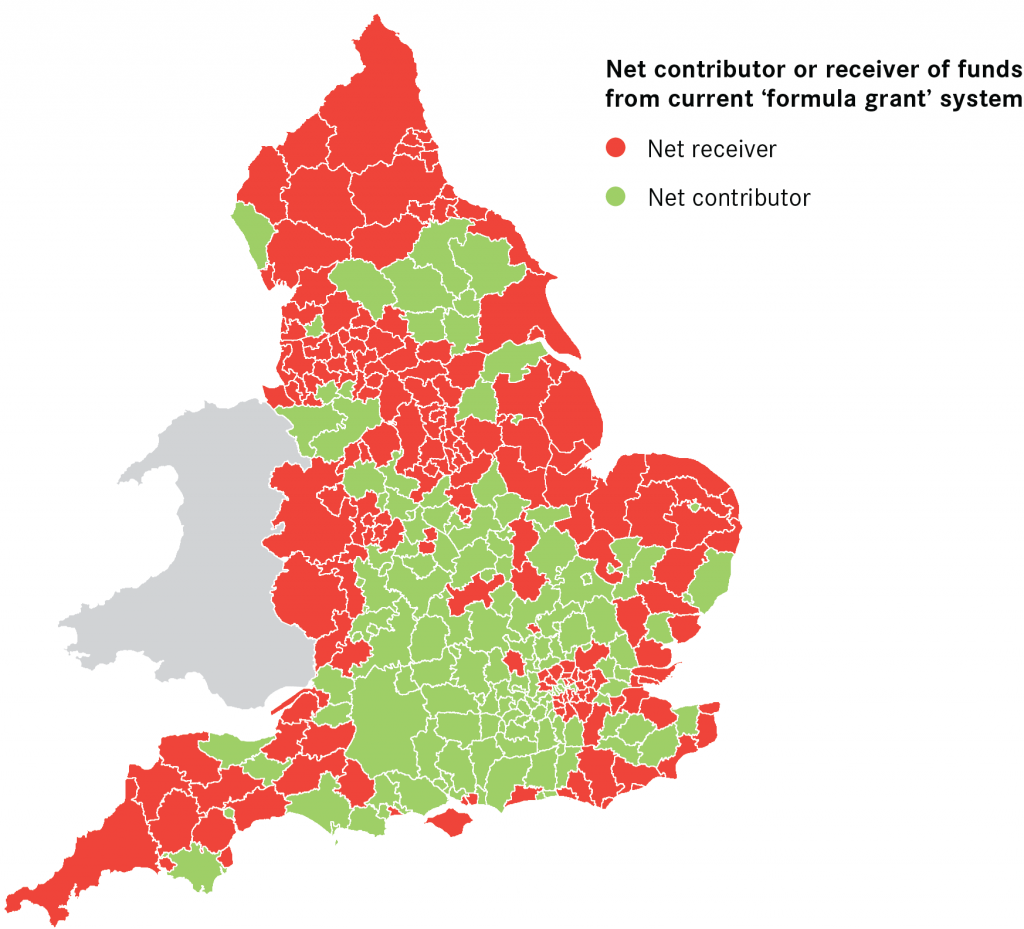 With or without greater devolution of business rates, there are long-standing concerns about the design of business rates as a tax and its effectiveness as an incentive for boosting business activity, that need to be addressed in order for the tax to be fit for purpose:

To maximise the potential benefits from devolution of business rates the following reforms to the system should be made:

It is worth noting that some argue that the basic principle of a property based business tax is flawed30 and that the current system should be replaced altogether, by a sales tax, for example. The changing business environment, away from floorspace-intensive industrial use, towards more dense land-use in city centres, adds weight to the arguments that a floor-space based property business tax is not fit for purpose.31

Alongside business rates reform, there are also changes to council tax that would improve the ability of local government to support growth. Cities need the freedom to raise council tax rates without referendum and to introduce extra council bands in order to better reflect the local economy and distribution of property prices. In the latest Spending Review, the Chancellor announced that local authorities will be able to raise council tax by 2 per cent, in order to help fund social care. The restriction on additional revenues should be lifted, allowing local authorities to spend these funds in ways that best match local needs and priorities.

There are also broader risks and concerns if business rates and council tax are the only game in town when it comes to providing more incentives for cities to support economic growth. The next section looks at why and how we need to go further with fiscal devolution in order to provide stronger incentives for places to support growth and reform public services.