Devolution has risen up the agenda in recent years. City deals, local growth deals and more recently, devolution deals with city-regions in England, have gradually decentralised some powers over housing, planning and skills. These are welcome reforms and give cities much needed additional control and flexibility over the policy levers that can support local economic growth. But there is a need to go further and to give more control to cities over their finances, in order to better support economic growth and local public services.

Multiple reviews have called for local government in Britain to have more control over some of the taxes raised locally and for existing taxes such as council tax and business rates to be reformed in order to help localities prioritise spending and support growth. This is backed up by international evidence and practice which suggests that in the current centralised system, giving more control over their funding and local taxes to local government would improve economic growth.

So why, despite the broad consensus that some fiscal devolution would be a good thing, is there a reluctance to devolve more fiscal freedoms to local government? The answer mainly lies in the desire for equalisation between local authorities, with two specific arguments set out against fiscal devolution:

Both of these arguments tend to ignore the reality. There is already divergence in the quality of services delivered and local outcomes, as well as in the ability to pay, under the current highly centralised and grant-based system.

In addition, the recent central funding cuts for local government have reduced the resources available to them – with estimates that the total cuts, based on the latest Spending Review, will have been 56 per cent between 2010 and 2020.1 Many local authorities have warned that by 2016 they will no longer be able to cover basic services.2 The increasing cost of social care, driven by an ageing population and population growth, is of particular concern. It is estimated that by 2020 councils will need to find an additional £4.3 billion, or 2.5 per cent, increase in current local government spend, just to manage care at current levels.3 Given the cuts that have already been made and the commitment from the Government to continue to reduce public spending and reduce the deficit, this shortfall (and others) is unlikely to be plugged by central government grants. 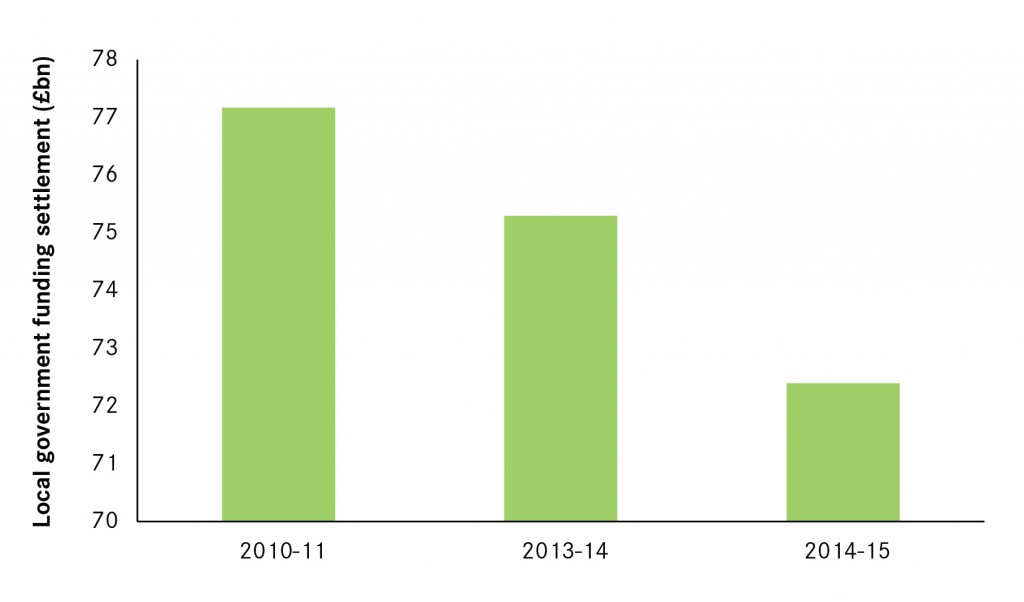 The only way for local government to meet the funding challenge is to reform the way in which it delivers public services and supports economic growth. Under the current system, local government has too few incentives and resources at its disposal to significantly shape and stimulate the local economy, or to deliver more effective and more efficient public services.

By giving local government more control, along with responsibilities, over local taxes (how money is raised) and public service funding and delivery (how money is spent), fiscal devolution provides an incentive for local government to prioritise public spending to deliver efficient and effective public services and to support local economic growth.

Incentivising successful places to grow their economies, which in turn will increase tax revenues, is likely to increase spatial disparities between them and other places that are not able to grow their economies as fast. But this is not a negative outcome in and of itself. And in the current context it provides the only way to increase the absolute amount of funding available to local government as a whole, given the reduction in grant funding.4

Much attention is given to the fear that fiscal devolution would create a system of winners and losers – that it is about creating ‘city-states’ with total local self-sufficiency. But none of these are inevitable outcomes, nor the primary purpose of fiscal devolution.

This report explores the impact of the business rate devolution proposals and argues for the need to go further, by diversifying the local tax base and creating sharper incentives for economic growth, in order to build a more sustainable system of local government funding, for all localities.

The first section examines the proposed devolution of business rates and what this will look like for local government. The second section then makes the case for devolution to go further and include land and property tax devolution to city-regions, while thinking carefully about how additional responsibilities passed down to local government can improve their ability to support growth.