1Benefits and challenges of the green belt

The OECD found that the responsiveness of housing supply to demand in the UK was the weakest among developed countries, due in large part to green belt policies. The green belt concept was first introduced for London in 1938 before the 1947 Town and Country Planning Act enabled local authorities to designate the status themselves. The policy was introduced to contain urban sprawl following huge post-war housing developments, and expanded greatly between 1951 and 1964. Since 1979, the green belt has doubled to cover 13 per cent of land in England (while only 2.3 per cent is covered by buildings).

While the green belt remains an enduringly popular policy, and has prevented urban sprawl, it is not cost free. The opportunity cost of the green belt is a lack of developable land, resulting in less homes being built and higher prices. New houses in the UK are about 40 per cent more expensive per square metre than in the Netherlands, despite there being 20 per cent more people per square kilometre there than in England. Furthermore, the cost of forcing development on to urban sites is that cities lose public land used locally or gardens which typically have higher bio-diversity levels than green belt land.

Rethinking the green belt on a case by case basis

One approach cities could use is to rethink the green belt on a case by case basis. As Figure 4 shows, there are 59,600 hectares of green belt land within a 25 minute walk of a train station within our successful cities, and 140,000 hectares including surrounding authorities. There would be no need to ‘concrete over’ swathes of desirable land as cities can instead designate poor quality green belt land that is suitable for housing close and well-connected to successful cities, while still protecting land which has value to communities. 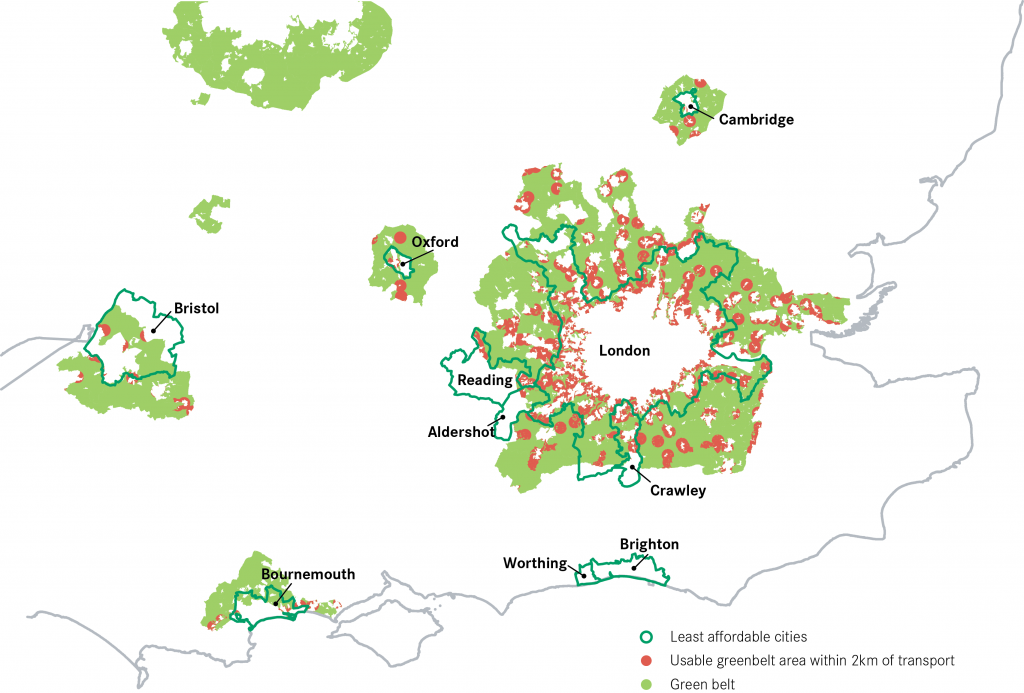 To estimate a figure for accessible land on the green belt, railway or underground stations are used to signal accessibility. A 2km buffer is drawn around each station to reflect a 24 minute walk at average speeds. After removing land already covered by buildings, it is assumed that 60 per cent of the site can be developed. This allows for infrastructure and services as well as the protection of highly amenable land. It is assumed development will be at low suburban densities of 40 dwellings per hectare – slightly below the national average of 43 dwellings per hectare for new house-building.4 Estimates also remove non-green belt planning constraints: Areas of Outstanding Natural Beauty, Ancient Woodlands, Special Areas of Conservation, Special Protection Areas, Sites of Special Scientific Interest and Local Nature Reserves. 5

If 60 per cent of green belt land close to train stations could be developed for housing at low average densities (40 dwellings per hectare), this would allow for more infrastructure and the protection of land most valuable to the community – as well as room for 1.4 million new homes inside the city area, developing just 5.2 per cent of their total green belts.6 If the same was done to include the green belt areas in local authorities that surround these cities, this would provide land for over 3.4 million new homes.

Clearly, many of these sites will serve important local roles and so development should not happen on a blanket basis. However, evaluating this land on a case by case basis would enable local authorities to bring a significant amount of land, that is undesirable or of poor quality, to market. This land would be viable for development and close to the jobs and infrastructure of successful cities.

Building, on average, at suburban densities would allow for improvements to existing roads and infrastructure as well as the protection of areas most valuable to the community. Furthermore, the lower densities would appease some local fears of tower blocks or dense housing estates.

Figure 4: How does the green belt designation work?

In order to release or review green belt land, a local authority outlines the proposal in the draft Local Plan. The draft is submitted to the Planning Inspectorate who – acting on behalf of the Secretary of State – is able to reject or amend parts of the plan if found to be unsound. 7

The Government has encouraged councils to use the flexibilities set out in the National Planning Policy Framework to tailor their green belt areas to reflect local circumstances.8 Some local authorities have designated land in their core strategies for housing of strategic importance9 but others, restricted by local politics, have called for more national support for changes.8

The green belt remains an enormously contentious political issue. In October, the Secretary of State for Communities and Local Government issued guidance that unmet housing demand would not suffice as ‘exceptional circumstances’ to alter green belt.11 It is therefore of critical importance that national politicians properly evaluate the costs – of the current blanket approach keeping all green belt land, rather than reviewing its quality on a case by case basis – alongside the benefits.