While the analysis above shows the new economy is highly concentrated in certain locations across the UK, and that services play a big role within this, the past two decades of UK policy have not reflected these realities. Box 4 features a timeline of innovation policies since 2000 and this section provides a critique of the approach taken by successive governments.

Box 4: A timeline of innovation policies and plans

While not exhaustive, the list below sets out policies and plans designed to boost innovation. 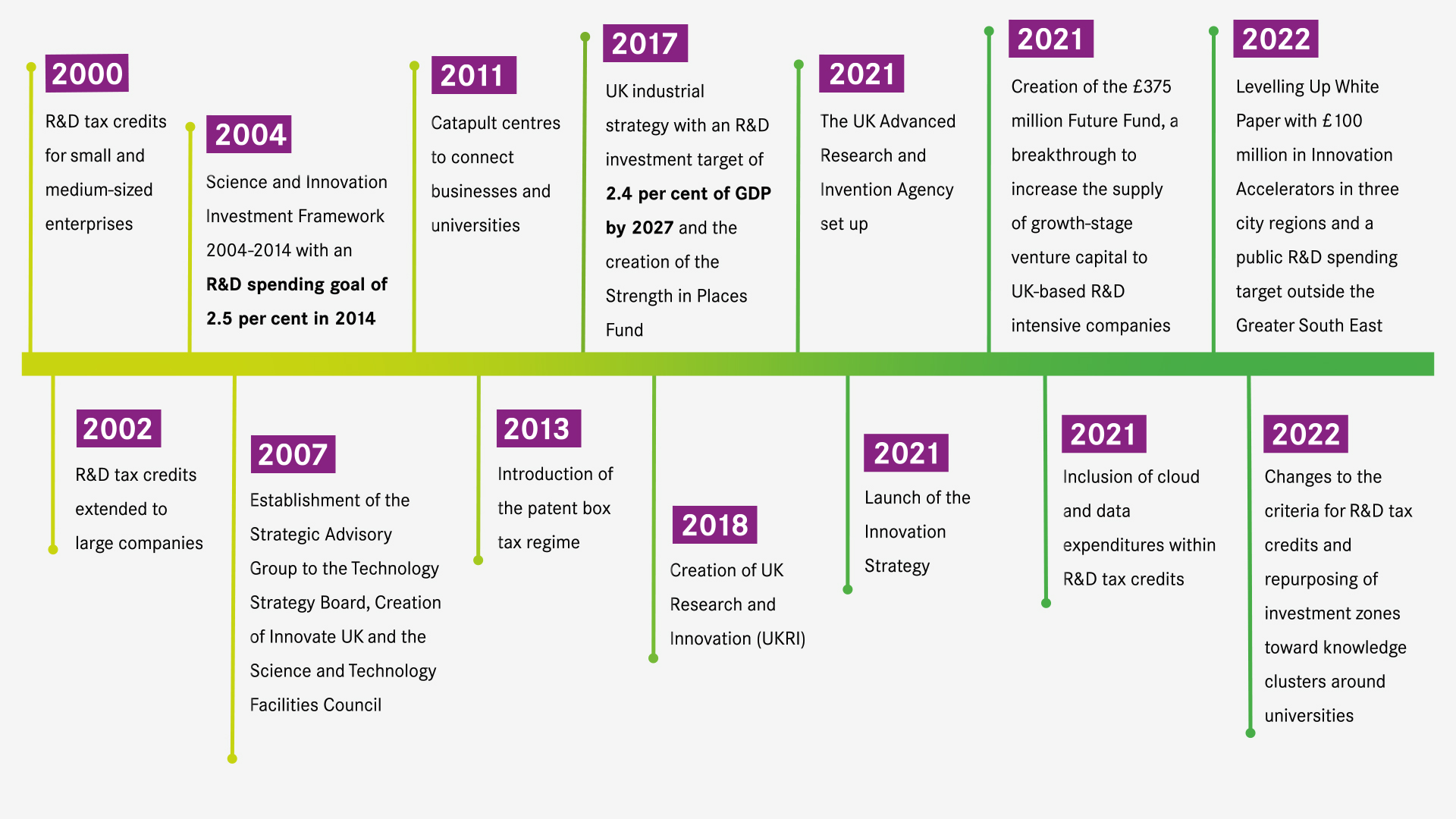 In recent years, a popular framing of policy both at the national and local level has been to focus on certain sectors. For example, the 2017 industrial strategy had specific sector deals for areas such as aerospace, AI and the automotive industry. And a number of local economic strategies over the years have also been keen to identify ‘key’ sectors.40

The principle is understandable – to give support to potential growth sectors at the frontier of the economy. But the execution is challenging for a number of reasons. Firstly, it is not clear what the ability of policy makers is to predict the growth industries of the future. Secondly, it misses the reality of many different new economy sectors clustering together, and the activity this creates. FinTech is a good example of two separate industries combining to form a new one.

This clustering happens for at least one of two reasons. The first is that there is a clear purpose for two businesses to be located close to one another, for example collaboration. The second is that while at the margins a particular industry may have a specific requirement that policy could assist with, most new economy activities have very similar needs. The analysis above shows that those places that can offer access to skilled workers and knowledge are able to attract a number of components of the new economy.

The recent approach of policy does not reflect the realities of the new economy. A modern approach would be one that takes a broader look through the lens of place, complemented by national interventions such as R&D tax credits, competition policy and the protection of intellectual property (IP) rights, rather than a tightly bounded focus on a handful of specific sectors.

Geography has been largely absent from policy over the past 20 years. Some interventions, like R&D tax credits and the patent box tax regime, are rightly national even if they will play out differently across the country. But there has been a lack of policies that are explicitly spatial in their approach (or at least an explicit spatial strategy in terms of how public money to support innovation is spent).

The most contentious example of this has been the allocation of public R&D investment. In 2018, London and the South East region were awarded 49 per cent of the Government and UKRI’s R&D spending.41 This has not been a deliberate spatial strategy – it has been place-blind in that it has been driven by assessments of the quality of research of universities (known as the Research Excellence Framework). However, the geography of the best performing institutions means that this has concentrated funding in the Greater South East. This illustrates how national policies can have very particular sub-national implications.

Many have pointed to this being a reason why innovative activity in the UK is skewed towards this part of the country.42 In response, the Government has made a commitment to increase public R&D spending outside of the Greater South East by at least 40 per cent.43

As yet there is no clear strategy as to how this money will be spent. The Government had initially promised to change this with the publication of its R&D and place strategy, which would set out its approach across the country. But this did not happen. Instead, the Government decided it had been superseded by the Levelling Up White Paper. Unfortunately, it does not set out any clear spatial strategy about how place should influence how R&D funding is allocated.

Spatially focused policies have not been totally absent from the long list of interventions and two stand out in particular. The first is the Catapult Centres, which were introduced in 2011 by Innovate UK and are intended to be hubs for research and industry to commercialise and disseminate new innovations. Each centre has one of nine specialisms across 40 different locations in the UK. The second is the Strength in Places Fund announced in 2017. To date, it has allocated £314 million to 12 full-stage projects through a competitive bidding process.44

Added to this is the recent announcement of Innovation Accelerators in Birmingham, Glasgow and Manchester. While the £100 million allocated to them is very small in the context of what is spent on R&D in the UK, the Government has made an explicit spatial choice and focused on the places where productivity is the biggest challenge for the UK economy, and this is very welcome. The detail on what exactly the accelerators will do is still to be set out, but the evidence in this paper suggests they should base their plans on a good understanding of where innovation happens in their areas and use this to influence how they attempt to foster more. The same applies to the very recently repurposed investment zones that will aim to support the creation of ‘highest potential knowledge-intensive growth clusters’ around universities.

Despite the large role services play in the new economy, many of the policies in Box 4 have concentrated on product innovation by manufacturing companies, with the focus on R&D the most significant (around £22 billion was spent by the Government in 2020).45 However, the UK seemingly has a long history of not hitting its R&D spending targets.

The current Government has committed to increasing R&D spending to 2.4 per cent of GDP. But not only is this  less ambitious than the previous 2.5 per cent of GDP set in 2004, the UK systematically failed to achieve it. As Figure 17 shows, spending was well below this level in 2014 (the target date set by the original policy) and was not much better in 2019.

The ONS has very recently revised the public R&D figures that these government targets were based on, which has aligned them more closely with the figures HMRC collects from R&D tax credit data. This revision brings UK spending much closer to the original 2.5 per cent target, but even if these figures stand, the UK still trails behind the likes of Germany, South Korea and the USA in both R&D spending and broader productivity performance.46 Given this, the Government should raise its ambition for R&D spending.

Figure 17: UK R&D spending is below the OECD average

Innovation policy has been too narrowly focused on ‘tangible’ product innovation

R&D is a very narrow definition of innovation. While it is a particularly good tool for the development of new high-technology products, work by Nesta showed that innovation in services rarely depends on such investment and that policy has been designed for advanced manufacturing with a lack of focus on service-based innovation.47 This is typically associated with more ‘intangible’ innovation such as the integration and diffusion of existing technologies, the improvement of services, and the expansion to new markets and people, which all fall outside the R&D definition.48

Last year, the activities that fall under the R&D tax credits scheme were broadened slightly to include cloud computing and data. While welcome, this still misses out a great deal of intangible investment. For example, it does not cover skills (as is the case in Singapore), software investment or developments in social sciences, so does little to encourage investment from services new economy businesses.4950 This needs to change, either by expanding the definition of R&D or by increasing spending in other areas to encourage other forms of innovation.

UK business investment since 2008 has been very weak. It took more than six years for total business investment to recover from the global financial crisis, finally surpassing its 2008 peak in 2014. Just two years later, it flatlined after the EU referendum and when Covid-19 struck, it plunged.51 It is hard to see how this cumulated loss of investment over the past 14 years has not restricted the supply side of the economy.

Looking at specific aspects of this business investment that are directly related to services innovation paints a similarly bleak picture. According to the OECD, the UK has comparatively low levels of investment in things like IP products and computer software and databases, as shown in Figure 18. A similar relationship is found in total ICT investment, where the UK spend is around 1.8 per cent of GDP (2017), below the Netherlands (4.2 per cent), France (3.6 per cent) and the United States (3.4 per cent).

Figure 18: The UK is behind several developed nations when it comes to intangible investment

There has been a slide in business skills investment as well. Per employee, it has steadily declined since the onset of the global financial crisis, and by 2019 it was 28 per cent lower than in 2007. UK businesses have spent half the amount on training per employee than the EU average, and the proportion of employees receiving training in the UK is lower now than in 2004.52

In addition, both trends have occurred alongside a tightening of immigration over the past decade. In 2012, the Government set an annual cap for Tier 2 (skilled workers) visas, and the graduate visa was ended (then reintroduced in 2021). Meanwhile, Brexit has stopped free movement of EU nationals.

The implications of this for innovation are likely to go beyond a restriction in the volume of workers; a number of studies suggest that skilled migrants have a disproportionate effect on innovation. Findings from the USA highlight that immigrants are more likely to file patents than the native population.54 Cross-country research shows migrants playing a disproportionally important role in innovation in English-speaking and European countries.55 And research in London found companies with more diverse boards were more likely to introduce new innovations.56

Across the UK, these effects are likely to have been predominantly felt in the cities with the most new economy firms. Figure 19 shows the greater the number of new economy businesses in a city, the larger the amount of National Insurance Number Online (NINO) applications from regions of the world where migrants have, on average, the highest level of skills.57

Focusing on improving R&D investment is a noble goal, but the shortfall is only part of the problem for the UK. The Government needs a set of policies to encourage investment in other areas that influence innovation, coupled with an increase in public and business investment in skills.