Knowledge has been the key driver of economic performance over the last 100 years. In general, cities in the South – such as Brighton – have been much more successful at replacing jobs lost in declining industries with jobs in new, more knowledge-focused activities. And this has meant that knowledge has driven the widening ‘North-South divide’ seen over the last 100 years.
Globalisation is likely to mean that the UK will continue to specialise in ever more high-skilled activities, while more routinised jobs that are exposed to international competition will come under increasing pressure to either be automated or offshored. Given the industrial make-up of our cities, these trends mean that without new approaches the ‘North-South divide’ will continue to widen. And the ever-widening relative performance of cities has implications on wage levels and standards of living across the country.

The economy is not static – it constantly evolves, and cities have to evolve with it. This means that in order to be successful, cities need to constantly encourage growth in new areas as older areas of activity inevitably decline, as Manchester is increasingly doing.

If policy is to improve the performance of cities across the country, supporting them to play a larger role in the national economy, then it needs to encourage the reinvention of their economies. It needs to break the natural reinforcement of a low-knowledge pathway by increasing the stock of knowledge in a city, as shown in Figure 17. 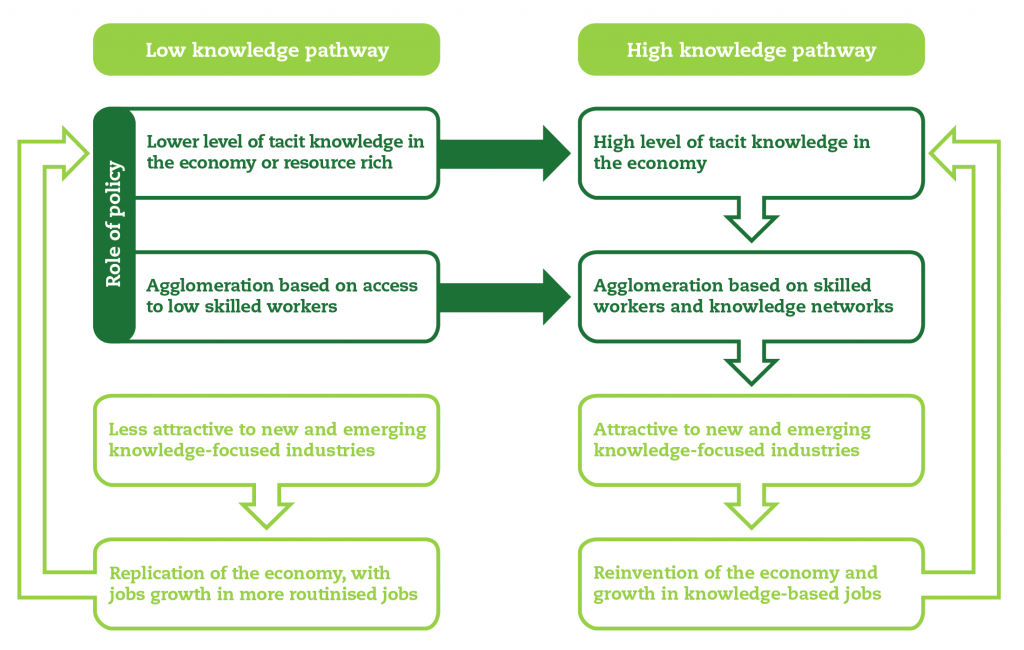 And so the long-term strategic objective of economic development policy should be to improve the stock of knowledge in cities and address the implications of industrial decline. This should centre on:

It is unlikely that all cities will successfully reinvent their economies in the face of the requirement to continue to adapt to the changing economic conditions. But there are a number of cities that currently punch well below their weight, and their reduced contribution reduces the overall size of the national economy. This will not change until economic policy stops looking backward to the past and instead looks forward to the future.