021. A century of city performance

Job creation in cities over the last 100 years

The fortunes of cities have vastly diverged over the last 100 years. The majority of cities have grown over this period – 46 cities had more jobs in 2013 than 1911, and 22 have more than doubled their total. But 11 cities had fewer jobs in 2013 than 1911. As Figure 1 shows, Crawley has been the fastest growing city over the last century and is seven times its size in 1911, while Blackburn and Burnley, which have seen the largest falls, are now only around half the size they were 100 years ago. 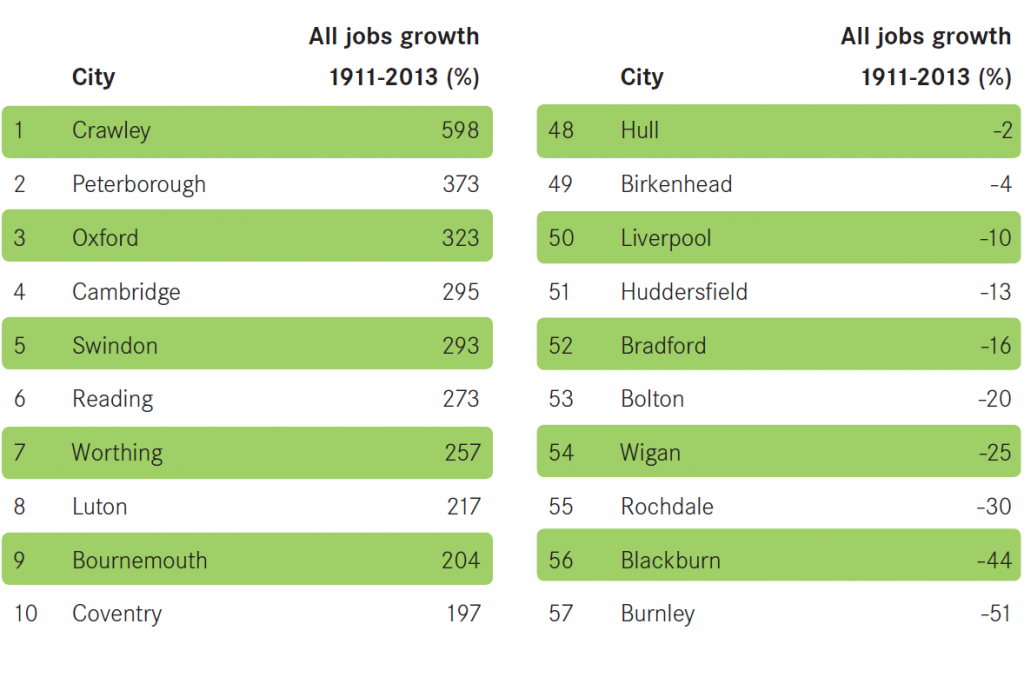 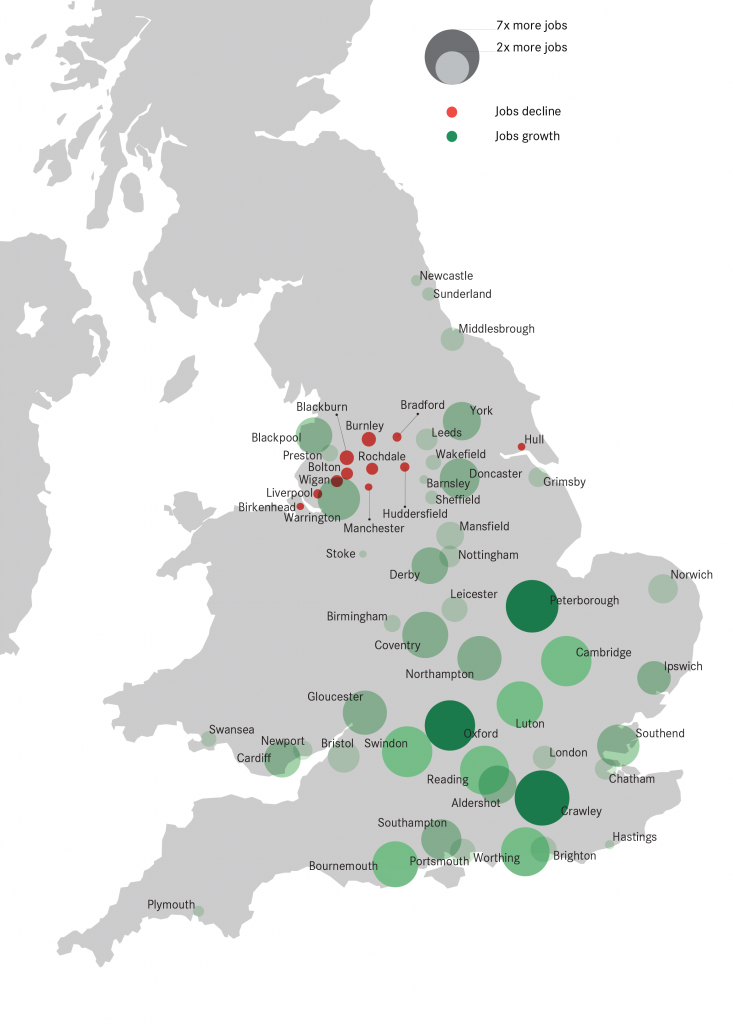 As the map shows, there is a very clear geography to these patterns. While this geography has received a great deal of attention over the decades, it is not the cause of it – cities in the North have not contracted because they are located in the North. The aim of this paper is to uncover and understand the underlying patterns that have shaped the current geography of jobs.

The changing role of cities

To understand why there has been such an extreme divergence in the performance of cities, we have to understand how a century of change has altered the role that cities play in the national economy.

In 1911 there were two main benefits to businesses – known as agglomeration benefits – that arose from locating in a city. These were:

1. The lower costs of being based in a city as a result of:

2. Benefits that resulted from being able to share ideas and information – known as ‘knowledge spillovers’. Broadly speaking there are two types of knowledge – codified knowledge and tacit knowledge. Codified knowledge can be communicated by books, for example, which allows it to be easily spread. On the other hand, tacit knowledge is best shared face-to-face. By concentrating people in one place, cities (and city centres in particular) allow the spread of tacit knowledge. This helps drive new innovations and long-run productivity growth.2

Figure 3: The changing role of cities 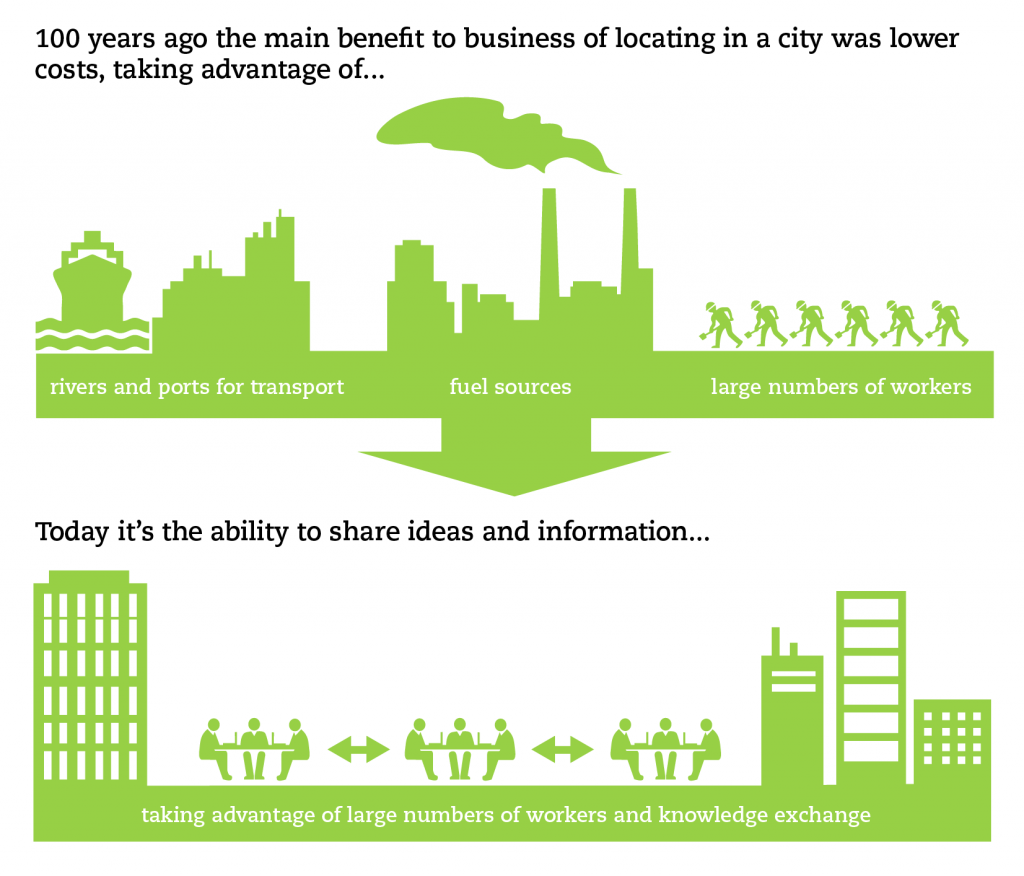 Given the industrial structure of cities a century ago, the former was much more important than the latter. Logistics jobs sprung up in coastal cities because of the presence of a port, while manufacturers based their location on where they could cheaply and reliably access fuel and get the workers they needed. In Birmingham, manufacturing accounted for 50 per cent of jobs in 1911, while in Barnsley two in every three jobs either mined coal or focused on making goods.

Over the course of the 20th century four factors, discussed in Box 2, have changed the benefits that cities offer to businesses. Advances in transport, logistics and power have reduced the cost advantages that cities were traditionally able to offer. And increasing globalisation has meant that businesses often find it cheaper to offshore lower-skilled, more routinised types of activity, such as assembly production lines.

But while these factors have reduced the low-cost benefits of cities, they have increased the importance of their second benefit – their ability to spread knowledge. As the national economy increasingly specialises in more knowledge-focused activities – such as in banking and creative activities, which have a greater requirement to access tacit knowledge – the role of cities as knowledge hubs is becoming increasingly important to the growth of the national economy.

Box 2: The drivers of change in cities over the 20th century

The spread of electricity and the rise of road transport. The spread of electricity released manufacturers from the ties of having to be near a fuel source, while the improvement in road transport – particularly through the advent of the motorway – made access to rivers and ports less important. This made proximity to these amenities less important for manufacturers, which because of the more routinised nature of their work, benefit more from access to large areas of land and good transport than from being close to other businesses.

Containerisation. The ports of London, Liverpool and Manchester were ill-equipped to deal with the increased size of ships introduced by the move towards containerisation from the early 1960s.

The aeroplane. The rise of the package holiday after the Second World War has had big implications for cities that expanded as seaside resorts, such as Blackpool and Southend. Meanwhile the aeroplane has meant that ports now play a much reduced role in the movement of people and goods.

Continued globalisation. Increased competition has squeezed UK manufacturing and low cost services,3 forcing it to become more productive to remain competitive. This has led to the structural change in the economy, where manufacturing makes a much smaller contribution to the national economy than it once did. In 1911, mining and manufacturing accounted for around 43 per cent of all jobs in England and Wales. Today it is less than 10 per cent.4 Globalisation has instead meant that the UK has moved towards specialising in more knowledge-intensive type activities, in which it is the production of the idea where the most value is added, rather than the production of the physical good that is important.

The internet. The web has created new digital industries and changed the way we work – making access to codified knowledge much easier. However, it hasn’t reduced the importance of face-to-face interactions in sharing ideas and building networks, which is where the 21st century city comes into its own.

Figure 4: A century of change

As the competitive advantages of cities and the national economy as a whole have shifted, the basic challenge for cities over the last 100 years has been to replace jobs in declining industries with jobs in new, more knowledge-focused, areas of activity. Globalisation, as well as technological and transport advancements, have reduced the advantages that cities offer as places of low-value production of goods and services but have increased their importance as places of ideas creation and knowledge exchange. 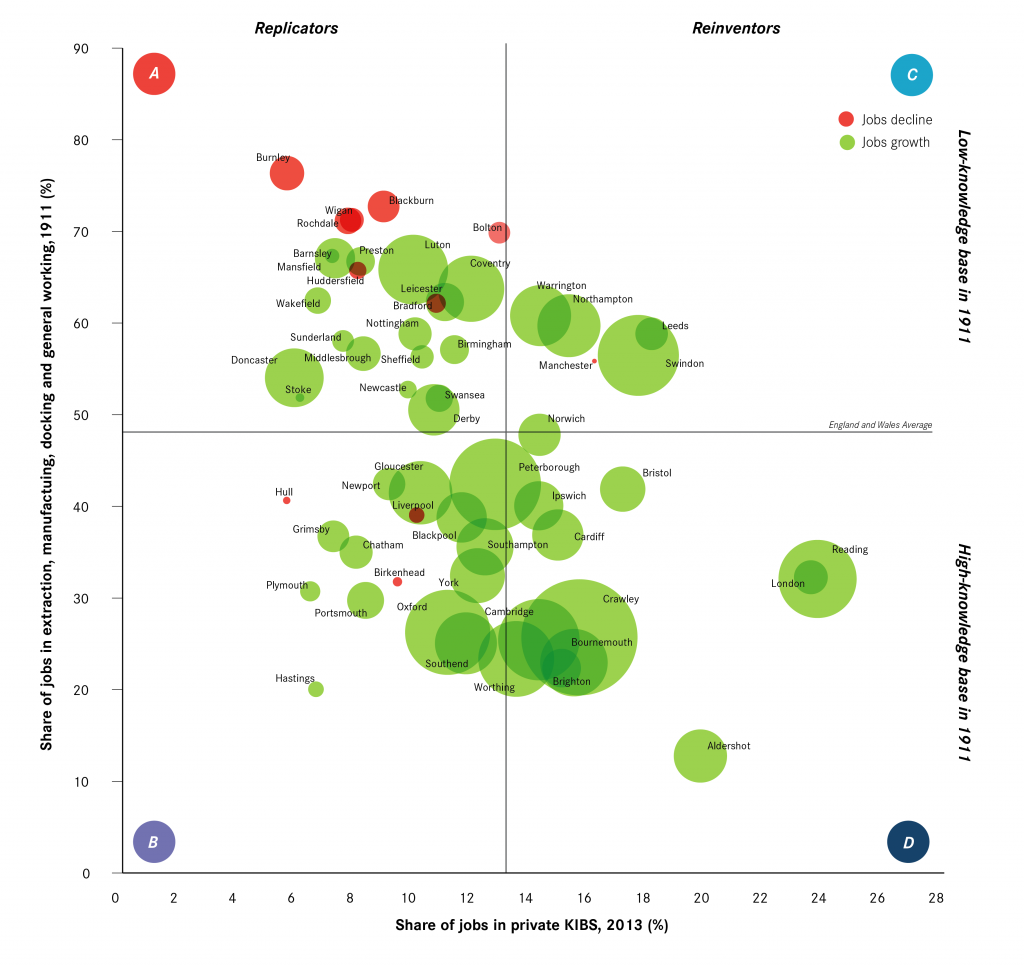 Figure 5 shows which cities have replicated or reinvented their economies over the last century. It plots the share of jobs in lower-knowledge industries in 1911 – those industries hit hardest by the structural changes to the economy6 – against the share of private knowledge-intensive business services (KIBS) jobs in 2013. The size of the bubbles represents the growth in the total number of jobs over the period.

The lines creating the quadrants denote the England and Wales average for each indicator. 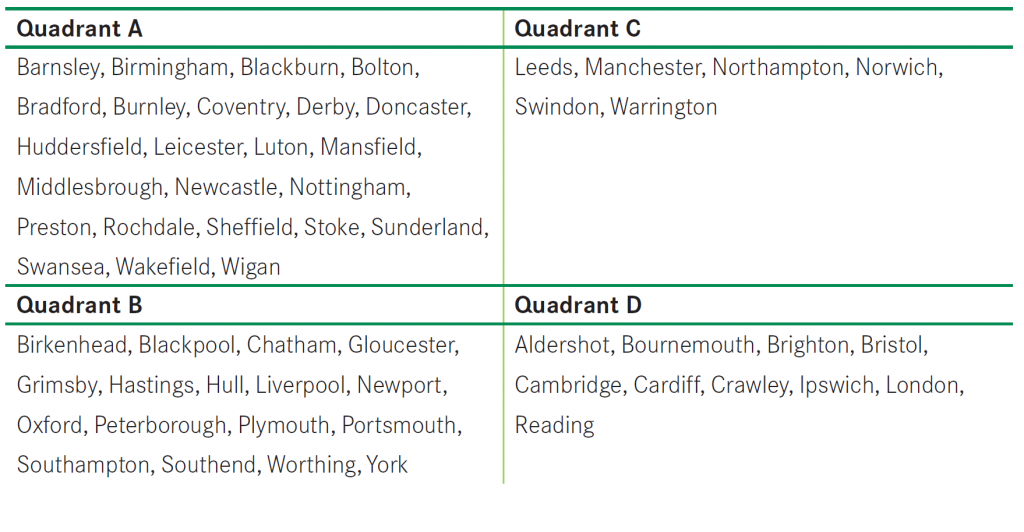 Whether a city is a replicator or a reinventor has an impact on economic performance today. Figure 6 shows that cities in Quadrants C and D tend to have higher wages, more graduate workers, higher numbers of new businesses starting and higher productivity, while cities in Quadrants A and B have a higher share of workers with low qualifications and a higher share of working age population claiming benefits.

The implication is that it is the geography of knowledge that has driven the widening ‘North-South divide’. Growth in cities during the industrial revolution was based on the advantages they offered as low-cost places to do business or their proximity to natural resources. The struggle of many of these cities to reinvent their economies has meant that they perform much less strongly today than those cities that have been able to change.

Cities in the South have, with a few generally coastal exceptions, been able to shift from centres of low-cost production to centres of knowledge production (noting that many have not had as large an industrial legacy to deal with as their northern counterparts, as discussed later). They have been able to attract and support growth in more knowledge-focused activities as they have emerged. Figure 7 shows the geography of knowledge across cities. 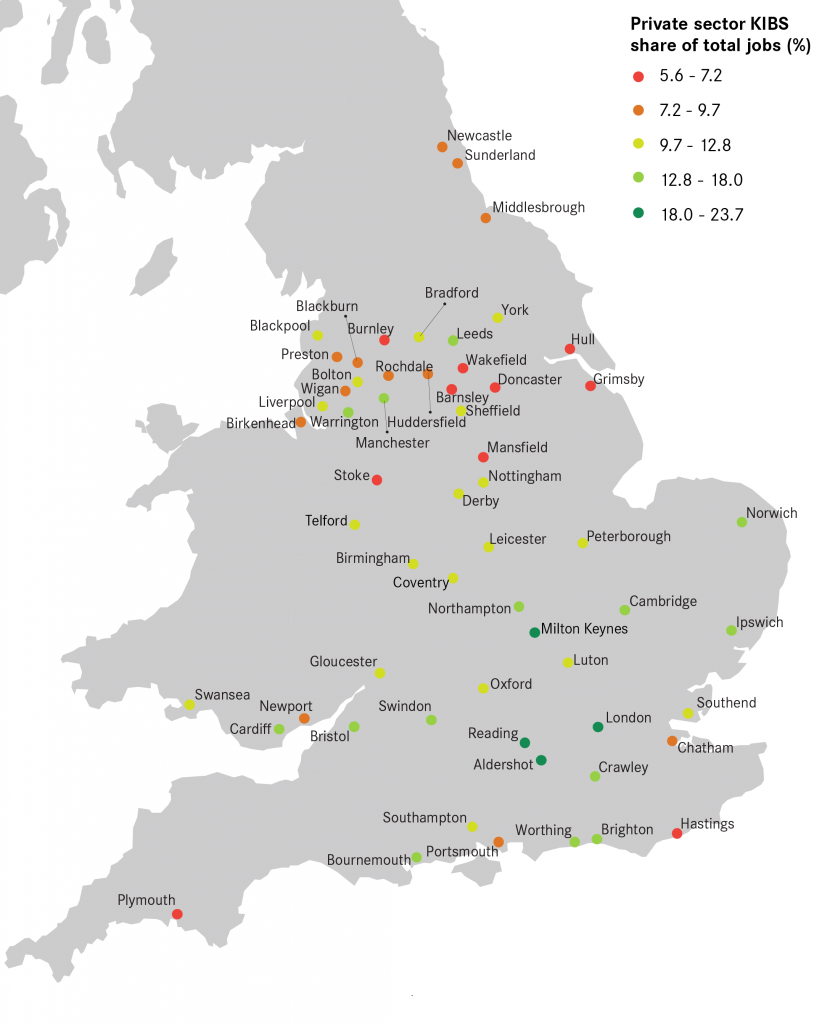