The 2011 Budget delivered a blast from the past, with the then Chancellor George Osborne announcing a new round of enterprise zones to follow the use of the policy by the Thatcher and Major governments in the 1980s and 1990s. In total 24 new zones were announced, and they subsequently became operational in 2012.
The context for the creation of this new rou1nd of zones differed to that for their predecessors. In the first round the areas chosen tended to be sites of economic weakness and physical decay. The aim was to both revitalise these derelict areas and encourage economic growth.2 The difference this time was that the focus was on reducing the burdens on the private sector so that it could deliver economic growth and job creation in response to the impact of the global financial crisis.3
There are two ways in which the zones aim to improve the economic outlook of an area. Firstly, direct tax incentives such as business rate discounts and capital allowances as well as easier planning permissions are designed to make an area more attractive to business investment. Secondly, the option for Local Enterprise Partnerships (LEPs) to borrow against future business rate growth allows them to invest in infrastructure to bring about the redevelopment of an area.
This paper establishes how well the current round of enterprise zones has performed five years after their inception. To do this it looks at the job creation seen in the zones between 2012 and 2017, showing the overall number of jobs created as well as looking at the type and geography of these new positions. The findings have relevance for enterprise zones and other area-based initiatives such as free ports, which have attracted policy attention in recent months.4

Enterprise zones offered a series of incentives including:
• Business rates discount of up to 100 per cent over a five year period,
worth up to £275,000 per business in total for businesses moving to
an enterprise zone before April 2015.
• Simplified planning.
• Superfast broadband.
• 100 percent first year capital allowances for plant and machinery.
In addition, LEPs retain all businesses rates growth within enterprise
zones for 25 years from April 2013, and this could be reinvested in the
area. Other concessions include the ability to use Tax Increment Financing
to allow local areas to borrow today against future increases in business
rate receipts to fund the development of infrastructure.

The allocation of the first 24 enterprise zones followed three different
rationales as summarised in Figure 1. The first 11 were allocated to LEPs
covering Core Cities5 in England. Two were allocated to the Humber and the
Lancashire LEPs in response to major job losses at BAE Systems plants. The
rest were allocated through a bidding process. The specific sites within the
LEPs were decided by the LEPs themselves. 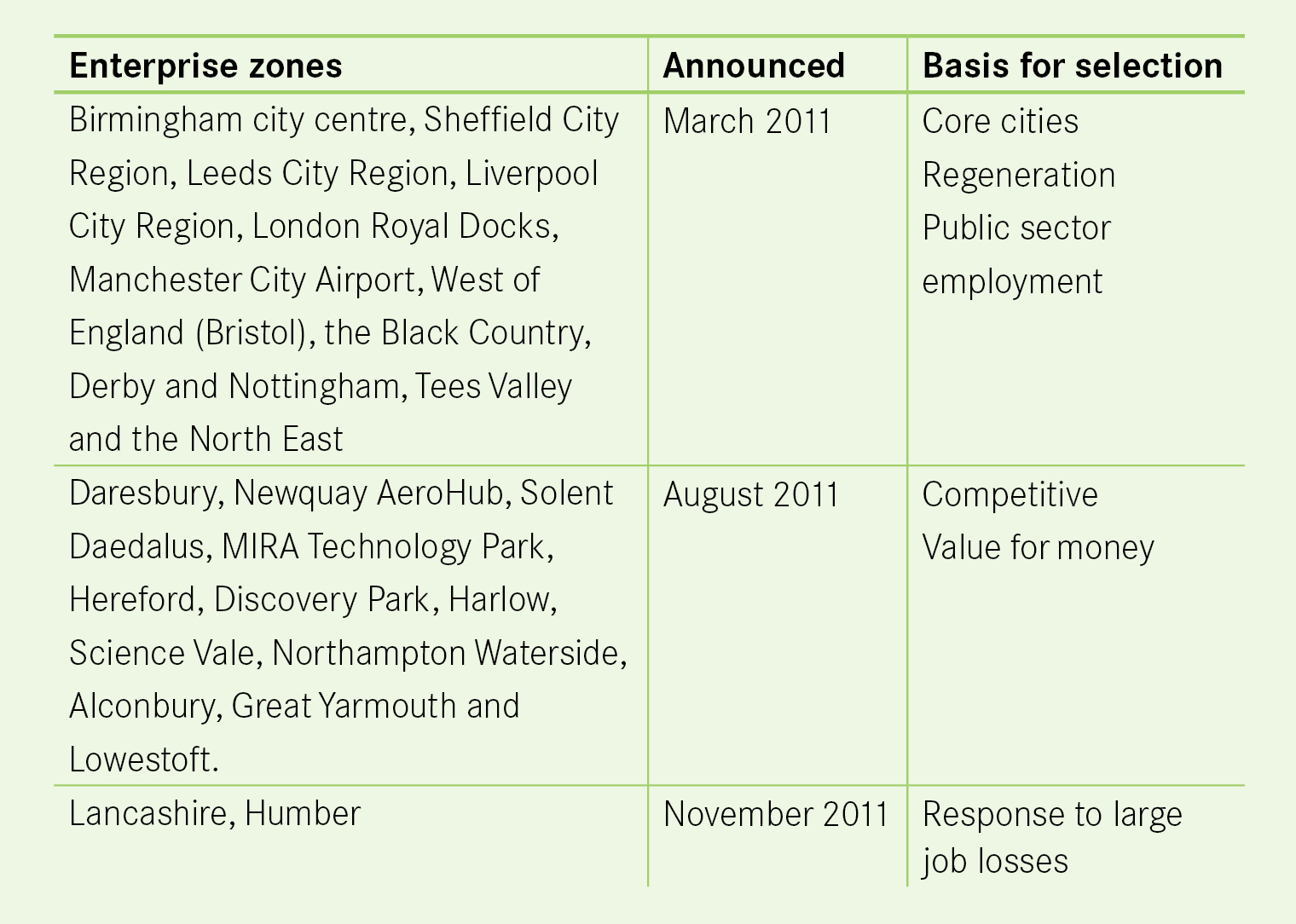