The composition of the new graduate workforce

Figure 22 brings together all graduates who decided to work in Liverpool on graduation to provide an overview of the nature of the graduate workforce in the city. A quarter of all workers were home-grown, growing up, studying and subsequently working in Liverpool. One third of workers were those people who came to study in Liverpool and stayed for work. Finally, 27 per cent of new graduate workers had been attracted in from elsewhere. 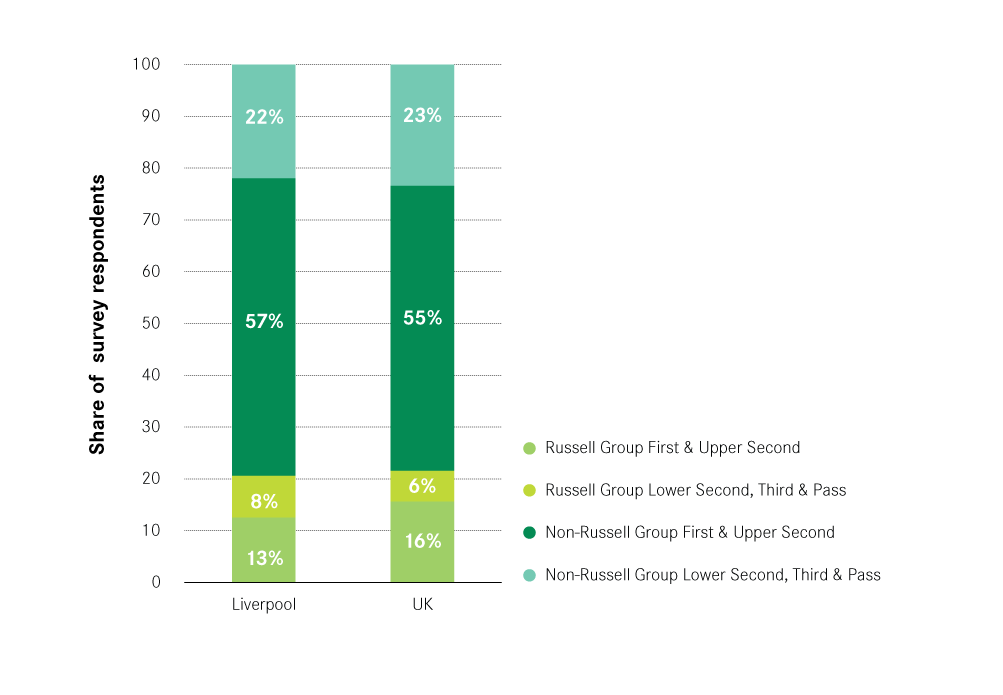 In comparison to other UK cities, graduates working in Liverpool on average earn £21,700, which is below the mean UK graduate wage of £23,100. Cities offering a similar wage were Nottingham, Milton Keynes and Wigan, as shown in Figure 24.5

However, analysis of UK graduates finds that graduate wages was not the main reason for graduates choosing their employment location.6 Other factors such as the type of jobs available in that city and the opportunities for career progression are more important.

The majority of working graduates in Liverpool work in the publicly-funded services sector, and the proportion working in KIBS is considerably lower than the UK average

The type of jobs available to graduates in each location will be a major determinant of where they choose to work. Figure 26 shows that a much higher proportion of graduates in Liverpool work in publicly-funded services (57 per cent), than UK graduates on the whole (46 per cent). At 10 per cent, the share working in private knowledge intensive business services (KIBS) was lower than the UK average (15 per cent).

Those who left Liverpool after graduating worked in different sectors to those who stayed to work in the city. Of the leavers, 18 per cent went on to work in a KIBS jobs, while 45 per cent went into a publicly-funded job. The analysis in The Great British Brain Drain showed that those cities with a greater number of jobs in KIBS industries tended to experience a greater graduate gain, while those more reliant on publicly-funded sectors to provide opportunities to new graduates were less attractive to graduates. This suggests that one of the reasons graduates left Liverpool was because of a lack of job opportunities.