The data above suggests that universities play a large role in the movements of people to and from Liverpool. This section explores the migration patterns of students and graduates into and out of the city using two data sets from the Higher Education Statistics Authority (HESA). The first looks at admissions (for all students at university in 2014/15), and the second is based on a survey of graduates six months after graduation (for leavers in 2013/14 and 2014/15). Unlike the ONS data used above, it covers the whole of the UK and includes students who came from abroad.

Most students at university in Liverpool were from the North West

As a group, the pull of Liverpool’s universities was mainly regional; nearly half of all students at university in the city in 2014/15 were from the North West, with 16 per cent from Liverpool and 31 per cent from elsewhere in the region. Another 6 per cent of students came from the West Midlands. There were also a large number of international students: 17 per cent of students were from overseas, more than from the city itself. 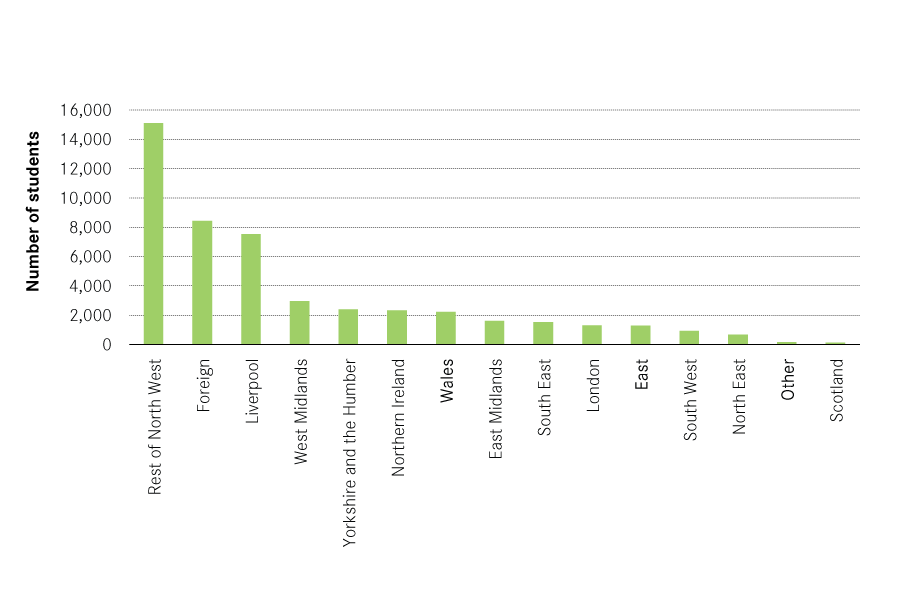 Figure 9: Origin cities of those students who moved to Liverpool for university, 2014/15 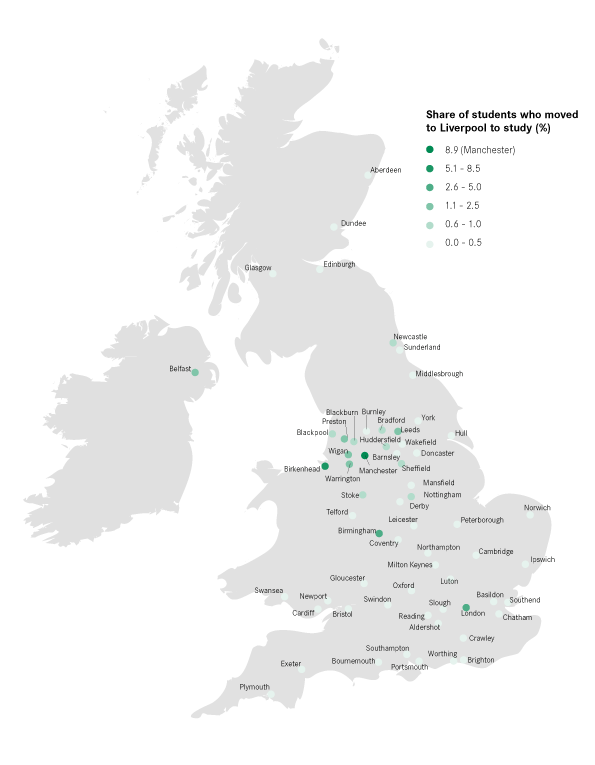 However, these patterns varied significantly by institution. At LJMU, 62 per cent of students were from the North West, with 21 per cent from Liverpool itself. Figure 12 shows how the proportion was similarly high for Liverpool Hope students, with 56 per cent coming from the region and 23 per cent from Liverpool. The pull of these institutions was therefore predominantly local. Other popular origin regions were Northern Ireland and the West Midlands. 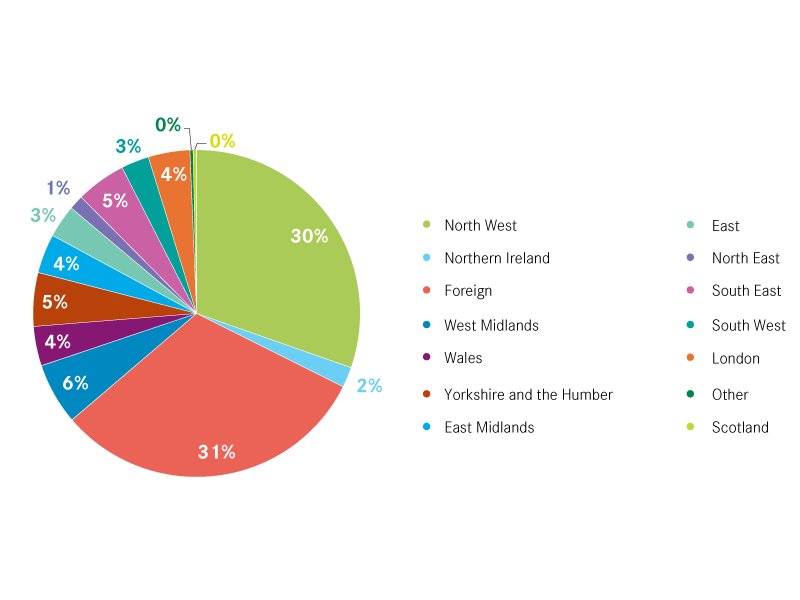 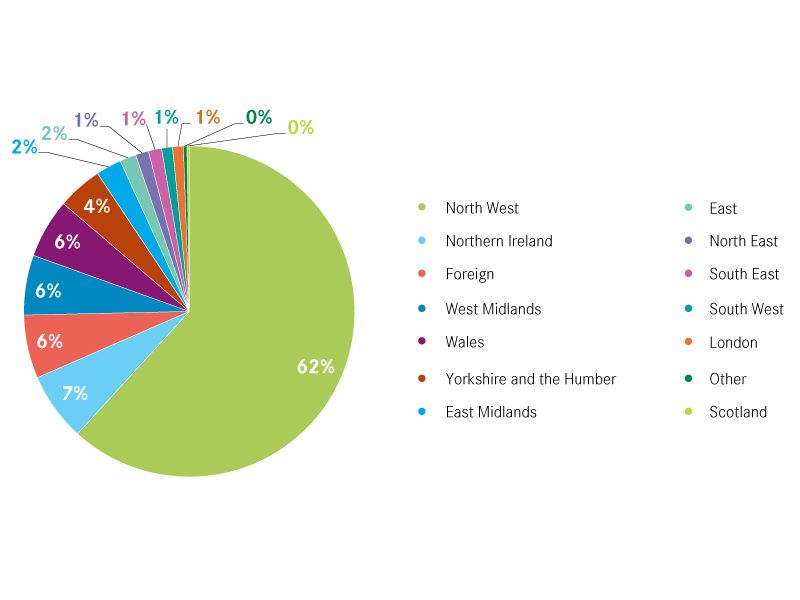 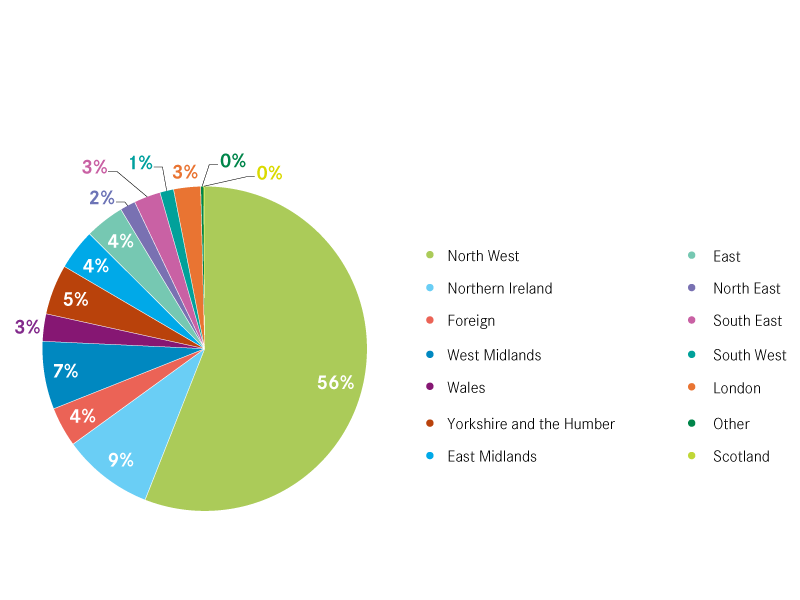 Figure 13: Origin of students at the Liverpool Institute of Performing Arts, 2014/15 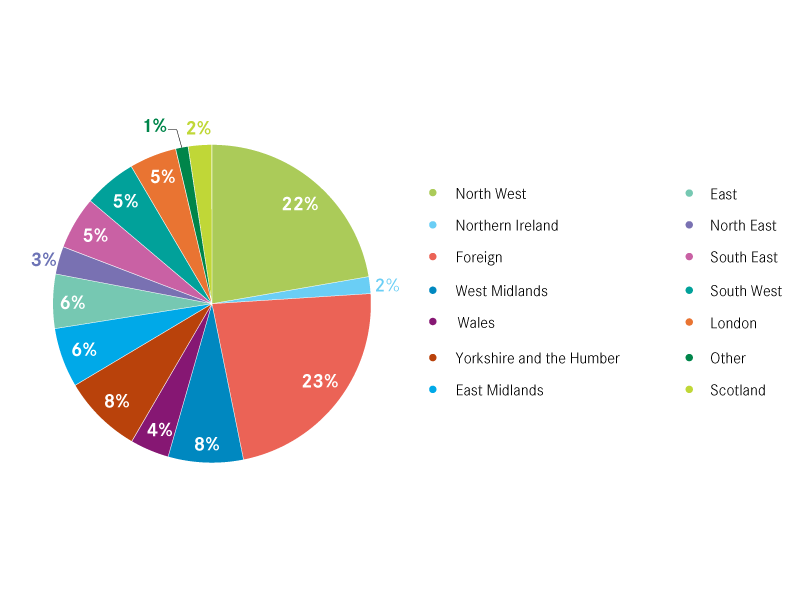 Half of all students from Liverpool leave the city for university, but tend to stay in the region

Of the 15,320 young people from Liverpool who were attending a UK university in 2014/15, 49 per cent were studying in Liverpool. Of those who moved away, the most popular choice was to stay within the North West region (see Figure 15). As Figure 14 shows, Manchester was by far the most popular choice, with 14 per cent studying there. This was followed by Preston (6 per cent).

Figure 14: Destination cities of Liverpool students moving away for university, 2014/15 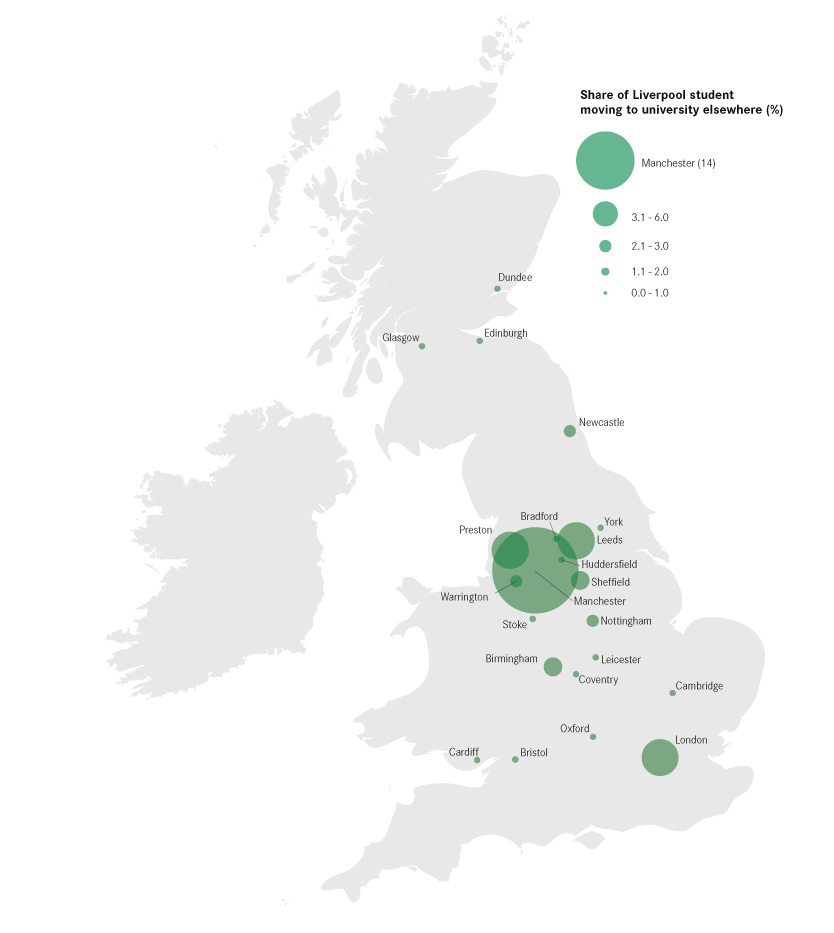 Figure 15: Destination regions of those moving away from Liverpool for university, 2014/15 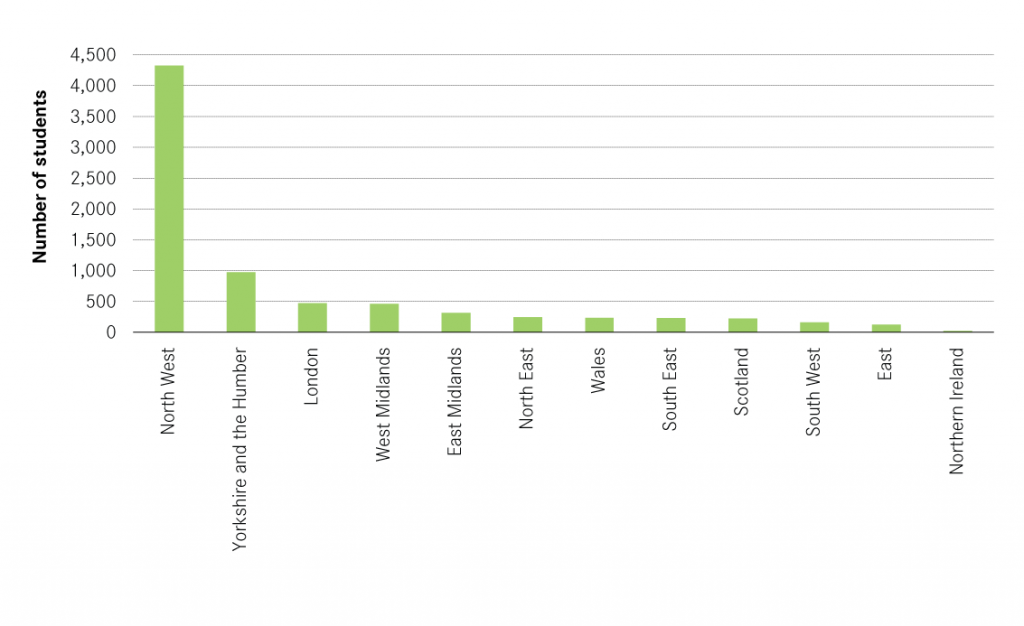 Overall Liverpool attracted many more students for university than it lost

Reflecting the movements of young people seen in the previous section, many more students moved into Liverpool for university than left to study elsewhere. In 2014/15 the net inflow of UK students to Liverpool was 24,900, one of the highest net inflows across all UK cities: 32,700 students in Liverpool were from outside the city whilst 7,800 students at other UK universities were originally from Liverpool. Other cities which benefited from a similar net inflow were Leeds, Nottingham and Edinburgh who each saw net inward migration of 33,000 students.

At 31 per cent, Liverpool had the 12th highest graduate retention rate of all university cities in 2013/14- 2014/15 (see Figure 16). However, as Figure 17 shows, this rate of retention varied greatly depending on which university the student attended. The proportion of graduates staying to work in Liverpool after graduation was highest for LJMU and Liverpool Hope. At 21 per cent, the University of Liverpool had a much lower retention rate, but this was not dissimilar to the retention rates of other Russell Group institutions.

Further nuance can be seen by splitting those who remained in Liverpool after graduation into two groups: those who grew up, studied and worked in Liverpool, and those who came in to study and stayed for work. 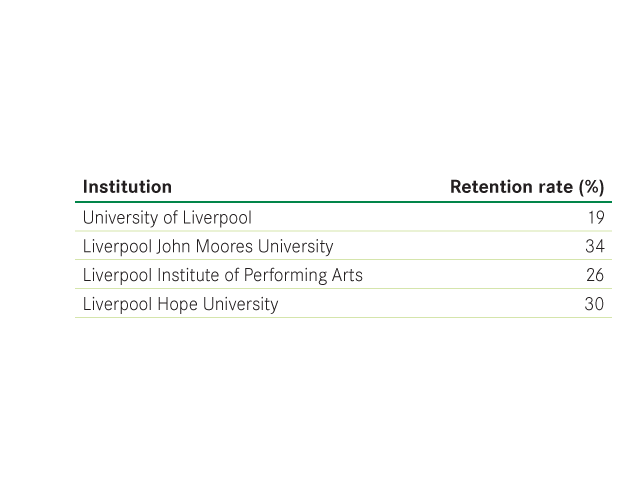 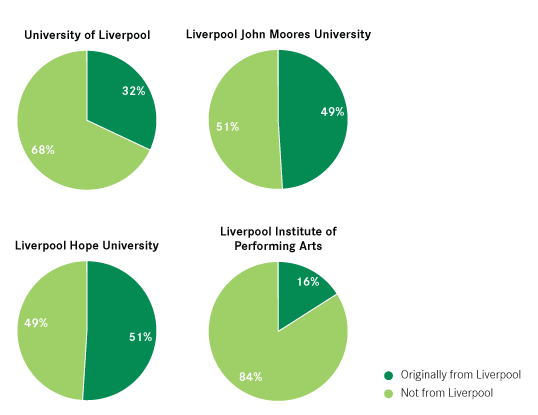 The most popular city destination of Liverpool’s graduates was Manchester 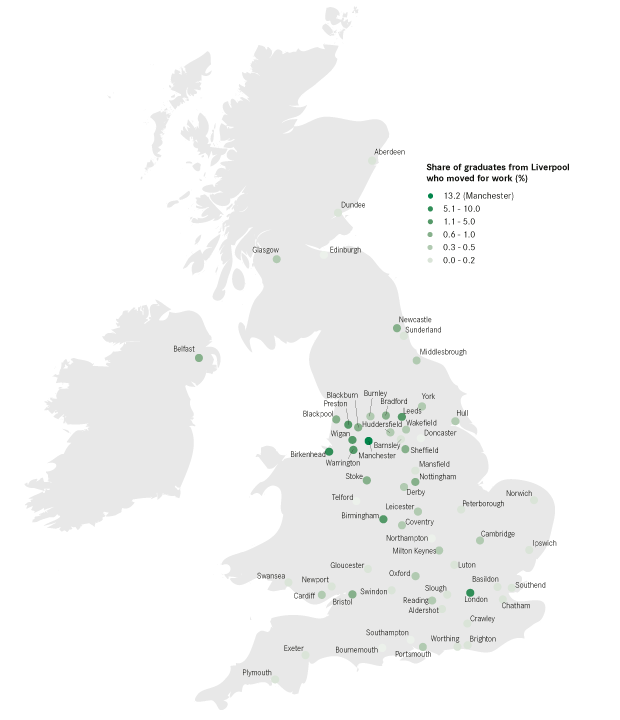 The final component of graduate migration consists of those who are attracted into Liverpool after graduation to work. While graduate retention figures tend to be given a lot of attention, the ability of a city to attract in new graduates from elsewhere is also an important part of increasing the number of degree holders in a city.

Again this cohort can be split into two groups: those that grew up in Liverpool, moved away, and then returned for work, and those that moved in for work but had not lived in the city previously. Of those students who moved away from Liverpool to study, 50 per cent returned for work. This was the 6th highest of all UK cities.

Liverpool was relatively less attractive to new graduates who had not lived in Liverpool before. The number of new graduates attracted in for work that had no connection to Liverpool was equivalent to 15 per cent of all students studying in the city. This placed Liverpool 31st out of 44 university cities.4

Putting this data on student and new graduate moves together shows that overall Liverpool experienced a ‘graduate gain’, attracting in more graduates who had grown up elsewhere (and had either moved to Liverpool to study and subsequently stayed, or moved in after graduation) than the number of people lost who grew up in Liverpool but worked elsewhere upon graduation. Figure 20 shows the size of this graduate gain, of 2,600 survey respondents. In absolute terms, this placed Liverpool as the 7th highest gainer of graduates, when compared with other UK cities; London gained 56,000 of the graduates who responded, Manchester gained 10,000 and Leeds gained 6,000.

This finding may not appear to square with the earlier finding about the outflow of young graduates from Liverpool. This is because there is one final cohort of students: the ‘bouncers’. These students move into Liverpool to study, and leave straight after graduation. Of all the students who moved to Liverpool to study, 79 per cent bounced. As Figure 21 shows, the number of bouncers was far larger than the graduate gain driving the outflow of young graduates shown earlier.