03What does the nature of the recovery tell us about tax raising power across British cities?

The data explored in the previous section illustrates the trends and changes in the fiscal performance of cities across the decade. In many ways, these trends reflect the economic performance across British cities observed over time.10 But given the context of disappointing tax receipts in recent years and persistent questions regarding the ‘productivity puzzle’ and the ‘jobs miracle’ on revenues, there is a need to understand more about the relationship between wages and employment and the level of tax generated.

While the previous section looked at levels of economy tax generated in British cities, this section will focus on tax revenues from income tax specifically. Income tax revenues account for a majority of economy taxes generated: in 2014/15 income tax made up 32 per cent of the total economy tax take. And because income tax is more directly related to employment and wage performance than other tax streams, it provides a sharper analysis of the relationship between wages, employment and taxation.

1. How has the ‘jobs miracle’ played out across British cities?

Concerns about slowing productivity and stagnant wages, although amplified by the recession, are long-standing. But much of the debate on the ‘productivity puzzle’ tends to be focused on the national picture rather than what’s happening at the city level: we know little about what the longer term relationship between of wages, employment and taxation looks like across and between British cities.

Most cities have experienced a ‘jobs miracle’. There are more people working in British cities than a decade ago but many earning relatively less. The average annual salary in British cities is £623 lower today than in 2004/05 and £2,494 lower than at their peak in 2008/09.

But the ‘jobs miracle’ has played out differently across cities. In most cities (39 out of 62) the general trend holds true: although people are individually earning less there are more jobs in these cities than there were 10 years ago (quadrant D in Figures 16 and 17). In a further five out of 62 cities, there are both fewer jobs and salaries are lower (quadrant C). Only in 15 out of 62 have both wages and the number of jobs grown over the decade (quadrant B). There are not clear geographic patterns, with the growing cities including both large and smaller cities, across the country. 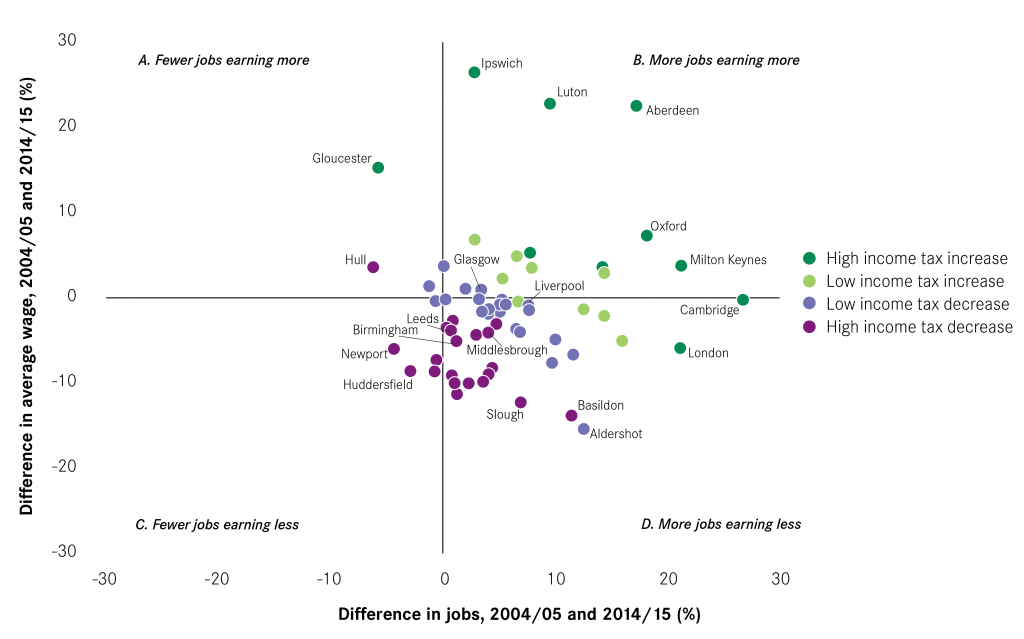 Figure 17: Change in wages and employment at city level over the decade 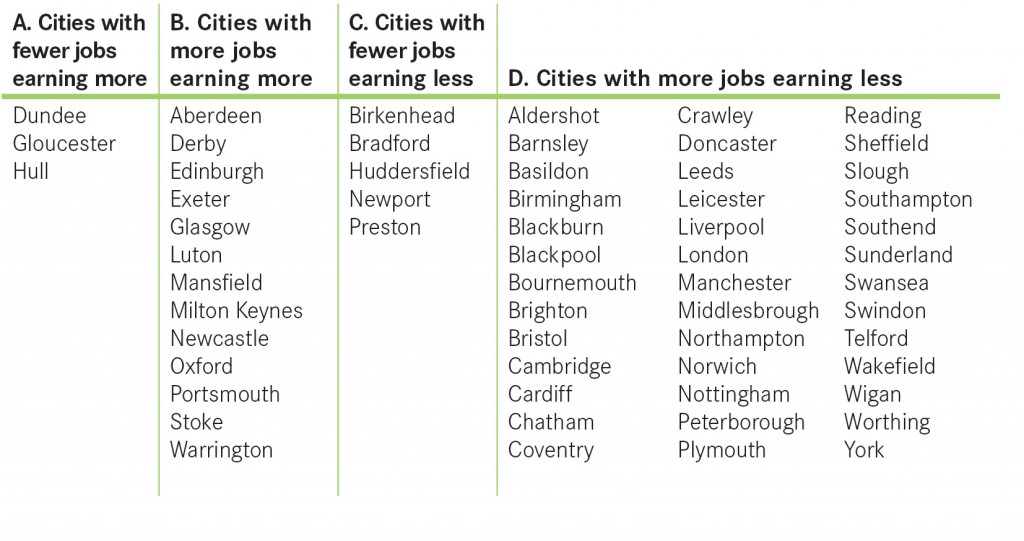 As Figure 16 shows, the relationship between wages, employment and levels of income tax is complex:

Nonetheless, the majority of cities (43) generate less income tax today than a decade ago, and of these most (33) have more jobs commanding lower individual wages, suggesting that wage levels have had a more significant impact on tax revenues than employment levels.

2. What impact have tax reforms had on the geography of tax generation?

While there have been many reforms to tax over the decade (e.g. changes to stamp duty, VAT, corporation tax, raising the higher rate threshold of income tax) one of the most high profile reforms has been the raising of the personal allowance – the threshold at which individuals start to pay tax on income. Alongside reforms to tax credits, this has taken some people out of income tax altogether and reduced the burden for many more. Intended to incentivise work and encourage more people into the labour market, this reform has also had the effect of reducing the revenues coming into the public purse.

The change in the personal allowance affected cities more so than elsewhere. The impact of reforms resulted in an increase the share of people who pay no tax in cities by 9 percentage points, compared to an increase of 7 percentage points in Britain overall. Interestingly, the total income tax generated in cities is 21 per cent lower today than would have been the case if the personal allowance threshold remained the same as in 2004/05,11 see Figure 18 below.

There is also significant variation in the impact of personal allowance changes. Although the income tax revenue of all cities has been affected, some have been affected more than others. Figure 19 shows the difference between actual income tax levels generated in 2014/15 and the amount generated had the personal allowance remained at 2004/05 levels. Those cities where the reform has had most impact on tax generation are Wigan, Huddersfield and Burnley, while those where the effect has been smallest include London, Chatham and Slough. 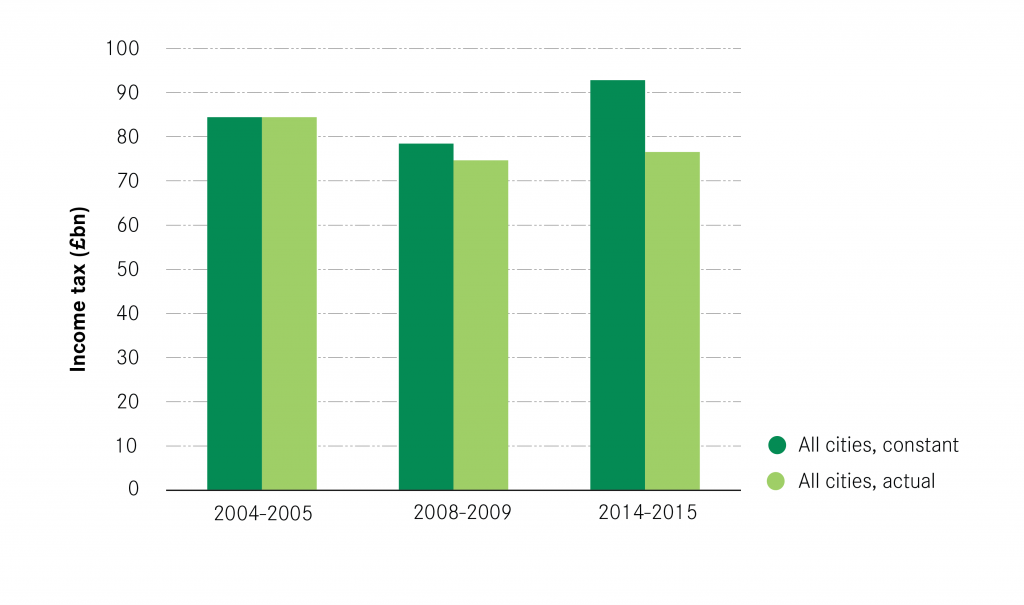 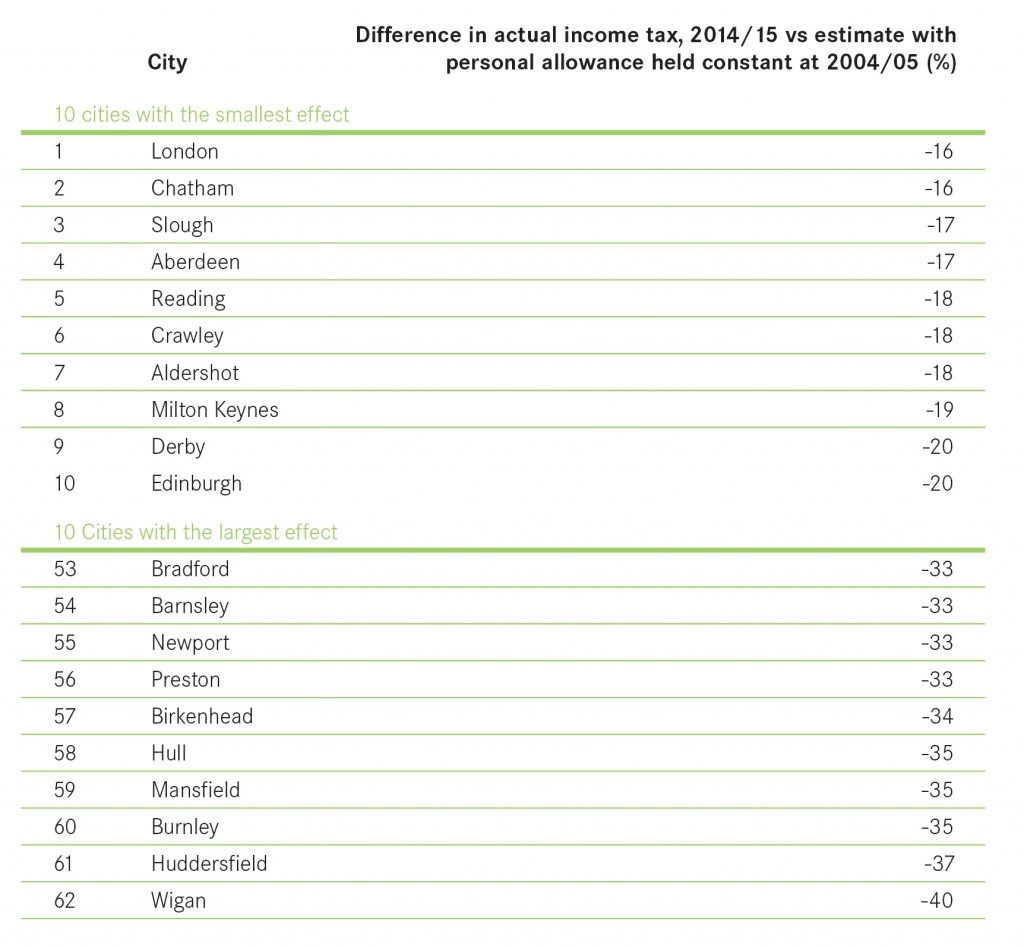 The so-called ‘jobs miracle’ has played out differently across cities, with most cities seeing job numbers increase over the decade. This combined with changes to the tax code – which have taken more people out of paying income tax altogether and reduced the burden for many more – helps explain the disappointing tax revenues received by the exchequer over the past few years.

Lower tax revenues are not in and of themselves a bad thing, particularly if policy has made an explicit trade-off between prioritising high levels of employment over higher wages for a smaller number of people.

The focus of Government policy to date has been to increase the number of people in work in order to keep the economy going after the recession. But in the context of stagnant wages and lower tax receipts, there is now a growing need to think about the quality of the jobs created. Focusing policy on supporting the creation of more high quality, high paid jobs in British cities is important for supporting long-term economic growth, but also for boosting the revenues available to re-invest in public services.