Building on our ‘Mapping Britain’s public finances work’, this focus of this research is to provide a 10 year analysis of the levels and patterns of ‘economy’ taxes generated in cities between 2004/05 and 2014/15.

Economy taxes are dependent on the growth of the economy and are levied on activities that governments are likely to want to encourage e.g. job creation. They include labour taxes (income tax and national insurance contributions), consumption taxes (VAT), land and property taxes (stamp duty, council tax and business rates) and capital taxes (which include corporation tax, capital gains tax and others – see the table for full details). We have excluded taxes which are levied on ‘bads’ such as alcohol and tobacco duty which policy is unlikely to encourage.

The data for Northern Ireland required to apportion regional or national totals to local authority level were not available, so the analysis covers only 62 primary urban areas in England, Wales and Scotland.

The methodology is based on HMRC rules for where and when products or services become taxable and who is liable for paying the tax and crucially follows one key principle: thinking about where taxes are generated by economic activity, as opposed to where data happens to be collected.

The indicators include publicly available data such as employment statistics from the Business Register and Employment Survey, population data from Mid-Year Population Estimates (NOMIS), earnings data from Her Majesty’s Treasury and information from local authorities and the Devolved Administrations on devolved areas such as council tax and business rates.

National data on taxes that are likely to be closely aligned with the general performance of the economy were apportioned to local authority level using various indicators. Income Tax data is available on a local authority basis, for example, but this is based on where the Income Tax payer lives rather than works. Given almost 50 per cent of people in cities live and work in different local authorities, it was important to capture where jobs are generating tax revenue rather than where workers happen to live. For this reason, levels of average earnings by employee jobs by local authority were used to apportion income tax from employment to local level. 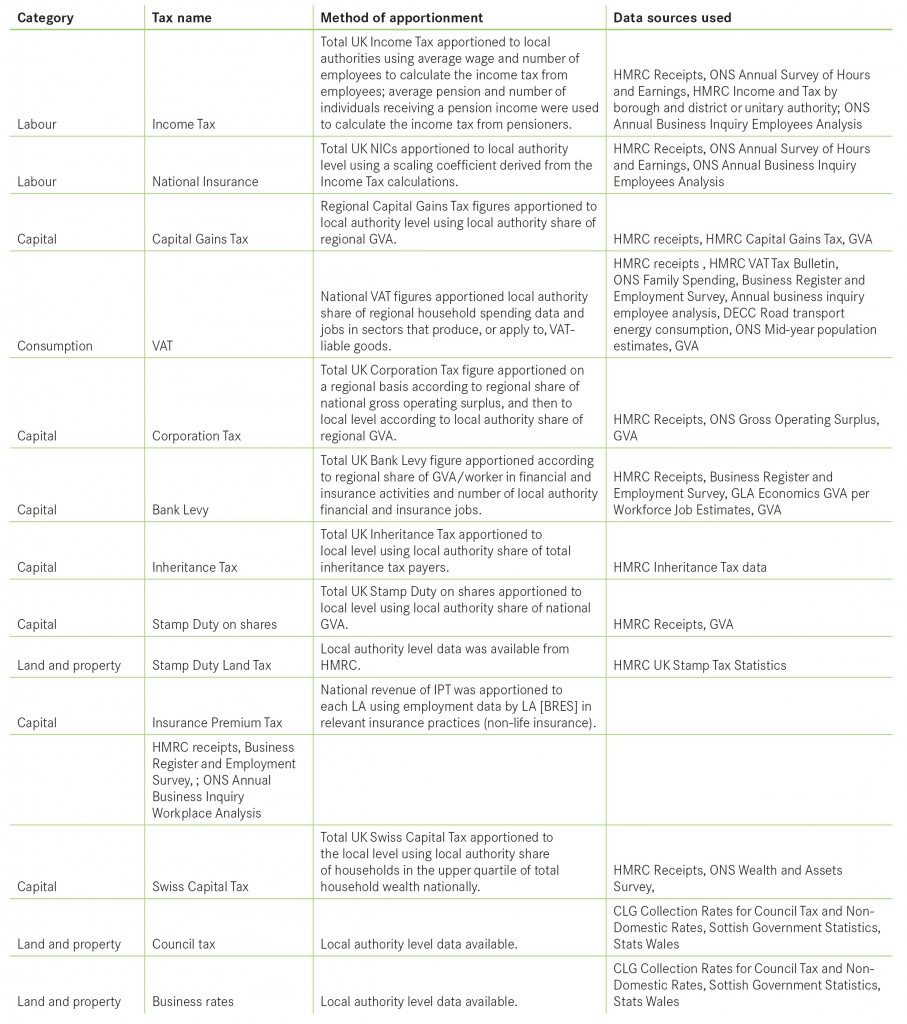