‘Levelling up’ the UK economy will be a key theme in Chancellor Rishi Sunak’s first budget, and indeed the other so-called fiscal events expected in 2020. This briefing sets out the five things that should be in the Chancellor’s Red Box if dreams of levelling up are to become a reality.

Local government funding has seen the largest cuts of any government department since 2010. And local authority services in urban councils in the north of England have been the hardest hit within this group, shouldering the heaviest burden of austerity (see Figure 1).

This has squeezed spending on day-to-day public services experienced by people in struggling places in particular. While the Spending Review will set out the detail, the Chancellor should signal his intent to increase spending for these authorities in particular to improve the quality of public service provision and standards of living. He should commit to year-on-year increases in funding for local authorities throughout the next Spending Review period.

Skills is the main challenge for most places with struggling economies. In particular, these places tend to have relatively large shares of people with no formal qualifications at all (see Figure 2). While university tuition fees tend to dominate political debate, it is further education colleges that will address this skills issue in cities and towns across the country.

The problem is that not only did further education see lower increases in funding than for schools and universities before 2010, it also saw the largest cuts after 2010. So to achieve his levelling up goals, the Chancellor should also increase funding to further education, particularly in struggling areas of the country. 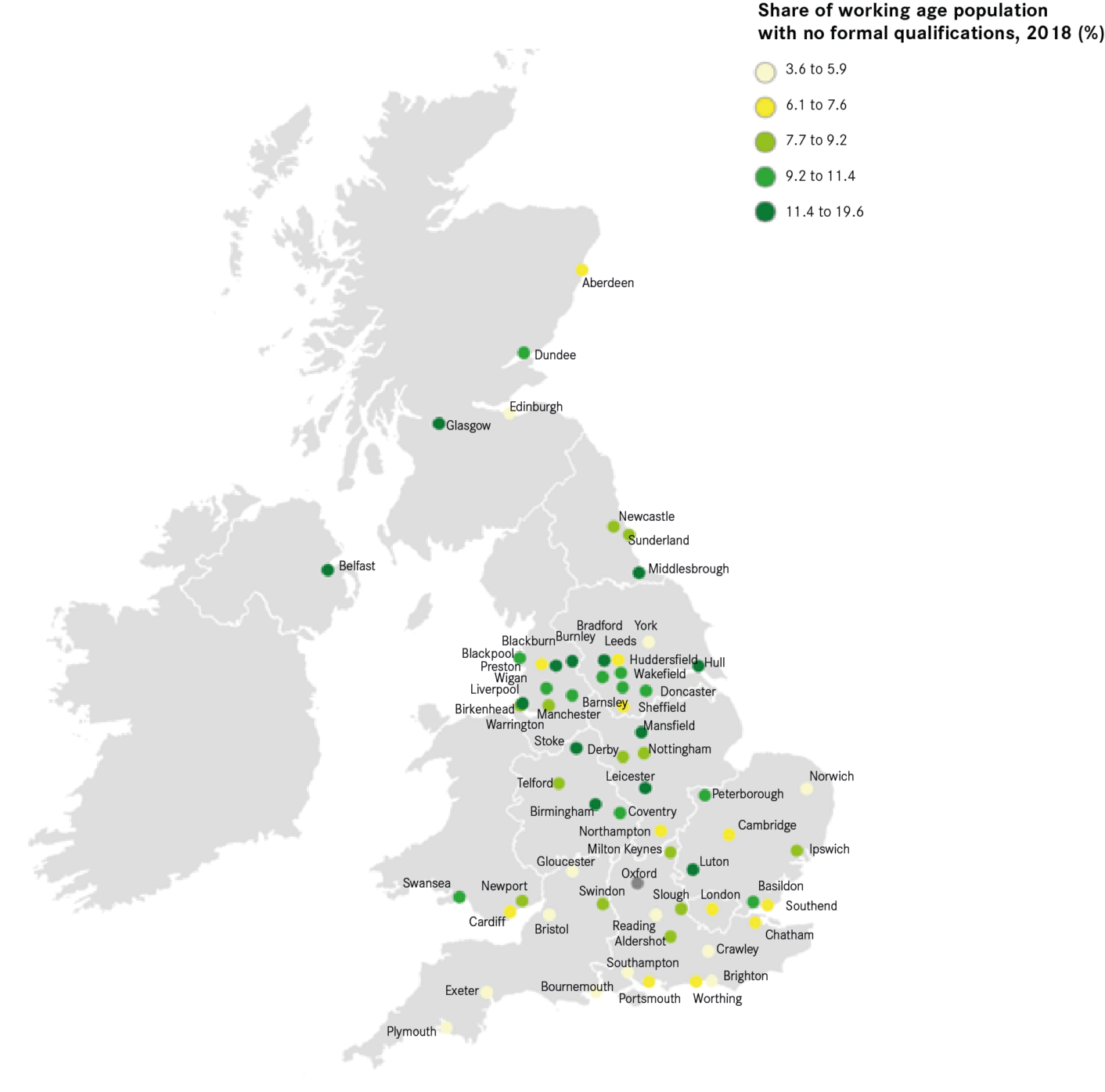 Much recent commentary has focused on ‘left-behind’ towns. But the Government cannot achieve its levelling up agenda without addressing the underperformance of many of the UK’s largest cities.

Big cities should be a boost to the UK economy, not a drag. But cities such as Manchester, Birmingham and Glasgow trail way behind their European counterparts such as Munich, Bordeaux and Gothenburg. Recent calculations by Centre for Cities estimated that the underperformance of the UK’s largest cities results in the national economy being close to £50 billion smaller than it should be every year.

Figure 3: Estimates of lost economic output as a result of underperformance, 2018

While much of this is skills related, transport is also likely to play a role. Congestion restricts growth in many of our largest cities in particular. The Chancellor should both commit to the National Infrastructure Commission’s recommendation of investing an additional £31 billion in new transport infrastructure in cities and large towns outside of London up to 2040, with large cities where congestion is a major issue getting priority.

Increasingly, high-skilled, high-productivity businesses are seeking out city centre locations because of the benefits that these dense urban areas provide. You have to look not further than central London, Manchester and Birmingham to see the evidence.

The challenge for many is that their city centres are not attractive to the most productive businesses that bring high-skilled, high-paying jobs, as shown in the bottom left quandrant of the chart. The Chancellor should classify city centres as key infrastructure in the UK economy and use money committed to the National Productivity Infrastructure Fund to establish a new £5 billion city centre productivity fund. Councils should then bid into to this fund to access money to make their city centres more attractive places to do business.

Figure 4: The success of city centres of attracting high-productivity jobs 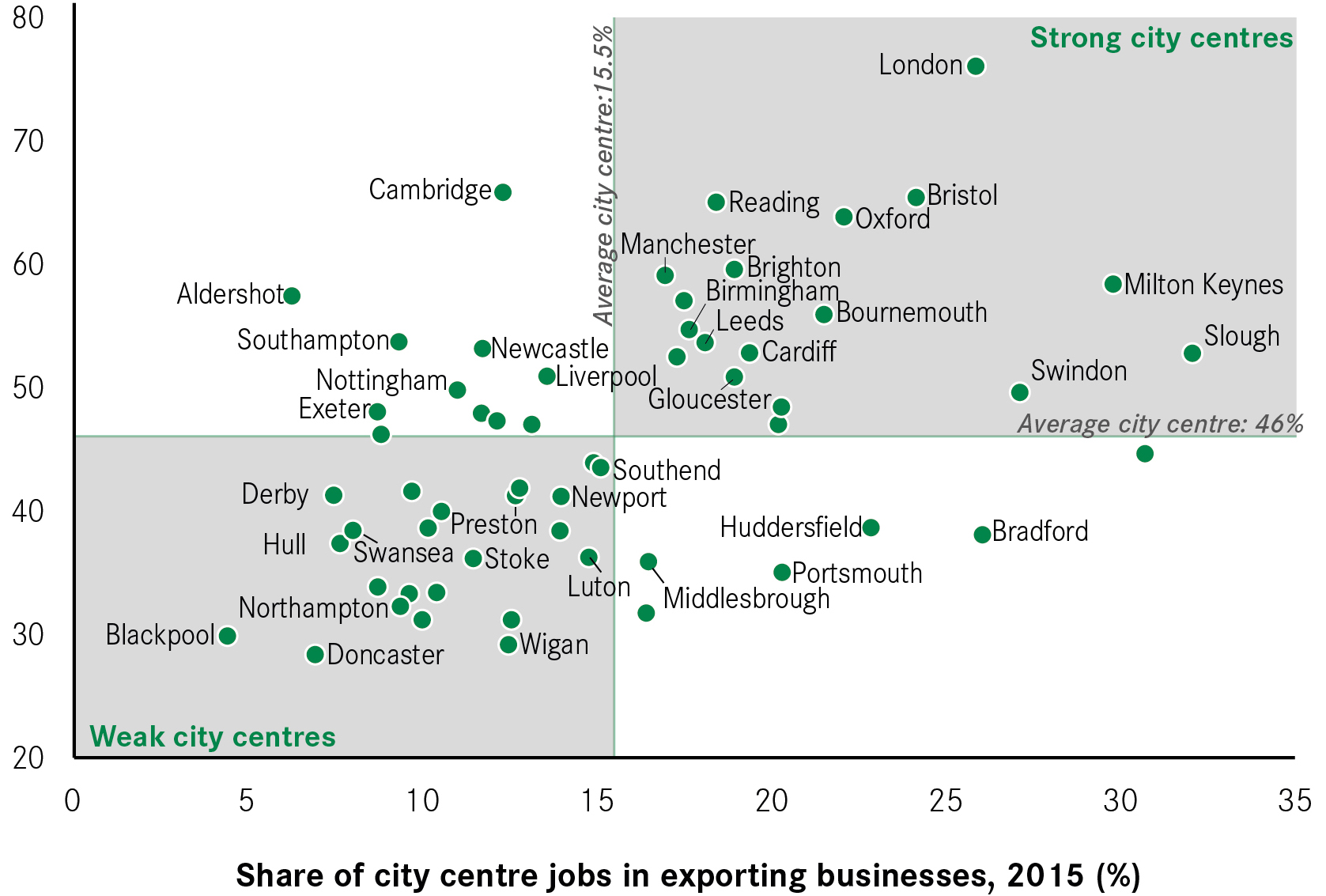 A number of large city regions in the North and Midlands have been able to set policy locally as a result of the powers they have had devolved to them in recent years. The big exception is West Yorkshire.

A levelled-up economy will need a strongly-performing West Yorkshire area, and allowing it to take greater control of local economic policy will be one way to do this. As Figure 5 shows, devolving economic powers to this level is the right approach because 91 per cent of people living in the West Yorkshire region also work in it. With this in mind, the Chancellor should announce a devolution deal for West Yorkshire. 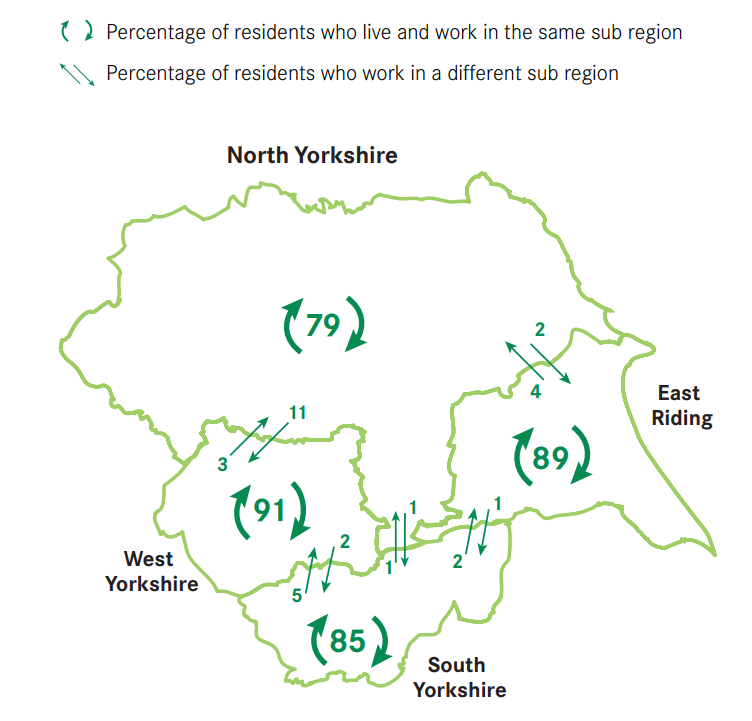 For more see the following recent Centre for Cities publications: