The new economy encompasses knowledge-intensive sectors at the very forefront of new technologies and innovations including software, robotics, telecommunications and gaming. Fuelling these sectors is central to improving the UK’s productivity and prosperity, and to the development of the national economy.

This report, published in partnership with HSBC UK, maps out the current geography of the new economy, considering where new economy firms are located and the drivers behind their locations, and sets out the policy interventions needed to kickstart the new economy.

The report finds that:

The geography of the UK’s new economy is distinctly urban

The new economy is urban focused, with businesses disproportionately based in cities.

In fact, UK cities are home to 59% of all new economy firms. This is largely due to the benefits that urban areas offer, such as greater access to skilled workforces and knowledge sharing. 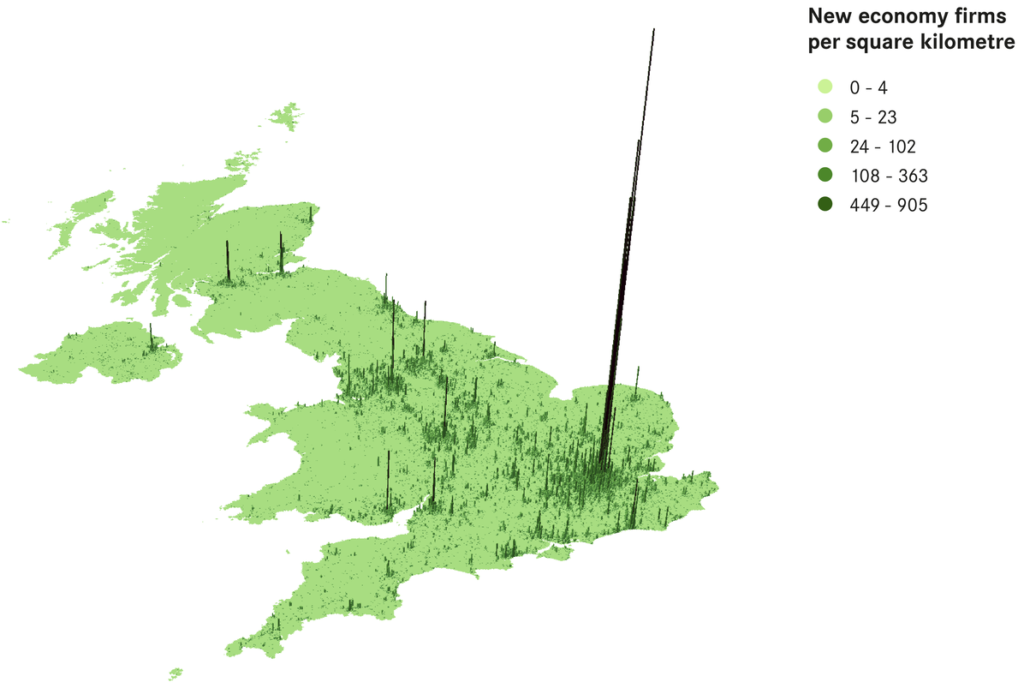 The new economy is not evenly distributed between cities. This disparity poses a problem for productivity.

The majority of new economy firms are located in cities within the Greater South East. This means large cities outside of this region, such as Birmingham, Glasgow, and Manchester, are lagging behind.

While these places are undoubtedly centres of new economic activity, they have fewer new economy businesses than they should, which is a likely reason for why they underperform in terms of productivity in comparison to their European counterparts.

To date, innovation policy has been national in its focus, largely ignoring geography. It has also typically focused on specific sectors, when a broader, more flexible approach would better support the ever-changing new economy and ensure that places offer what dynamic new economy businesses require.

Recent government policy has looked to take a much greater spatial approach, with the Levelling Up White Paper committing to increase R&D investment outside of the Greater South East by 40 per cent, and choosing Birmingham, Manchester and Glasgow as locations for new Innovation Accelerators. But the latter policy is lacking in a clear plan or strategy and it is unclear how and where investment will be spent.

The challenge ahead: How can Government fuel the new economy?

In order to kickstart the new economy, the Government should create a £14.5 billion growth package spread over ten years to build innovation districts in the centres of Birmingham, Glasgow and Manchester.

The Government can support the UK’s new economy more generally by:

“Supporting the growth of the new economy will be essential to ensuring the UK’s future success and by offering access to skilled workers and knowledge sharing between firms, city centres will have a big part to play in this.

The Government has high ambitions for the UK to be a world leader in innovation but achieving this will rely on a clear plan with substantial funding from Westminster. Investments in skills, regeneration, and infrastructure will all be needed to ensure we can attract leading businesses to cities across the UK and reap the rewards of success.”

This report was produced in partnership with HSBC UK.

This latest podcast episode unpacks the findings of our latest report published with HSBC UK which maps out the current geography of the new economy.

Centre for Cities calls on Government to invest £14.5bn to build city innovation zones in Birmingham, Glasgow, and Manchester in order to kickstart the new economy.

The Government should commit to a £14.5 billion 10-year innovation and growth package for Birmingham, Glasgow and Manchester.

Future of cities Levelling up Productivity
Which cities are home to the largest number of cutting-edge companies?

The UK’s new economy clusters in cities in the Greater South East with Cambridge, Reading and Milton Keynes leading the pack.