George Osborne’s determination to push for a massive devolution of powers and funding from Westminster to England’s major cities never really made sense to many in his party.

True, it was a long overdue step in addressing Britain’s status as the most centralised OECD country, and in helping its underperforming cities realise their potential.

Politically, however, it seemed strange to some that a Conservative chancellor would actively create powerful metro mayors in places like Greater Manchester and Sheffield, traditional Labour heartlands where they were sceptical that the Tories would ever win an election. The peculiarity of this position was only matched by the Labour Party’s stubborn hostility towards the offer of this particular gift horse.

Reports this week seemed to suggest that these political considerations may yet trump the potential economic benefits of mayoral devolution, with stories alleging that Downing Street is spooked by the prospect of opposition from a new generation of Labour leaders elected with significant personal mandates.

But is it true that Labour candidates will storm to victory in every city due to introduce metro mayors next May? Here we look at the raw votes in each of those places at the 2015 general election to gauge how the parties are placed. They indicate that while Labour should expect to win most battles, Conservative candidates should not be discounted everywhere. 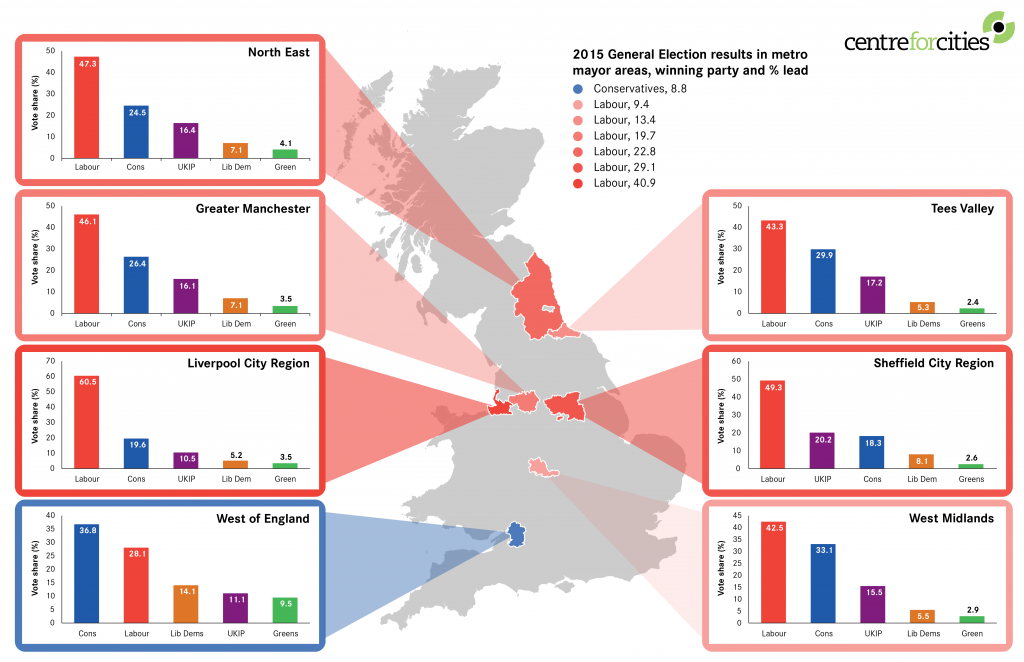 Our analysis suggests that, based on their 2015 performance, the Conservatives are likely to be heading for mayoral defeat in northern city-regions next year.

In Greater Manchester the gap between Labour and the Tories was 20 points – nearly a quarter of a million votes. It was even more in the North East, at 23 per cent (nearly 190,000 votes), and in Sheffield, where the Conservatives trailed by 26 points and more than 200,000 votes, with Ukip instead coming second in both contests. In Liverpool it could take generations before the Tories start closing Labour’s 40-point lead.

But further south, Labour’s advantage does not seem so daunting. In the West of England, the Conservatives garnered more votes than Labour across Greater Bristol – so if Theresa May wants to avoid a Labour whitewash in the mayoral elections, she should press for the deal there to be fully confirmed now.

Meanwhile, Labour’s lead over the Conservatives in the West Midlands was fewer than ten  points in 2015. In the spiritual home of the Labour “right”, the region’s traditional Labour voters may be turned off by its more recent leftward shift. With the Conservatives rumoured to be lining up Andy Street – chief executive of John Lewis – as their candidate, and having given him a prime speaking slot just before Theresa May at the Conservative Party conference, it’s clear that Labour’s nominee Sion Simon will face formidable opposition.

There are, as ever, a few issues to keep in mind when considering these numbers. First of all, turnout will be lower in May 2017 than in the general election, so if as usual younger people (who are more likely to vote Labour) do not turn out, but older people (who largely lean to the Conservatives) do, that could help to tighten the race between the two leading parties.

Secondly, a lot has changed since May 2015. The UK has voted to leave the EU, and Ed Miliband and David Cameron have been replaced by Jeremy Corbyn and Theresa May, which could have a major impact on the vote shares. Finally, governing parties generally do poorly in local elections, with voters often viewing local (and European) elections as risk-free chances to kick the government.

But with high-profile candidates competing for powerful roles, could more voters be persuaded to turn out in the mayoral elections, and not just to clobber national government? In May this year, 45 per cent of the electorate in London and Bristol took part in mayoral contests, a significant increase on previous elections and a sign, perhaps, that individual candidates can galvanise electors to vote in local elections.

And even if Labour do dominate the first mayoral elections in May 2017, there are no guarantees that they will retain the posts come 2020, when the second tranche of mayoral elections are due to take place. The successful candidates will face a range of competing pressures, including from central party to use their profile and platforms to provide critical opposition to the government.

But there are dangers here. If voters perceive that the new mayors are using their office as a pulpit for national politics rather than for delivering the best deal for local people, they may decide to go elsewhere with their votes – and that could provide significant opportunities for Theresa May’s Conservatives in the years ahead.