Supported by global insurer Zurich, the report ‘Small Business Outlook 2015’ (published today) offers an in-depth analysis of small and medium enterprises (SMEs) (1) in UK cities, focusing on the growth in recent years of ‘new work’ SMEs – highly-skilled, innovative firms in sectors such as the creative, digital and professional industries.

As well as showing that there has been significant growth in ‘new work’ SMEs in recent years, the report highlights that these firms have a big impact on the wider city economy by increasing demand and jobs in other sectors such as service-based businesses, retail and leisure.

It reveals that the top ten UK cities with the highest concentrations of ‘new work’ SMEs are also among the most successful places in terms of overall productivity, jobs growth and wages, highlighting the increasingly crucial role that ‘new work’ SMEs play in city economies.

Seven of the top ten cities for ‘new work’ SMEs are also in the top ten places in term of productivity and average earnings, while five of these cities are in the top ten for highest jobs growth: 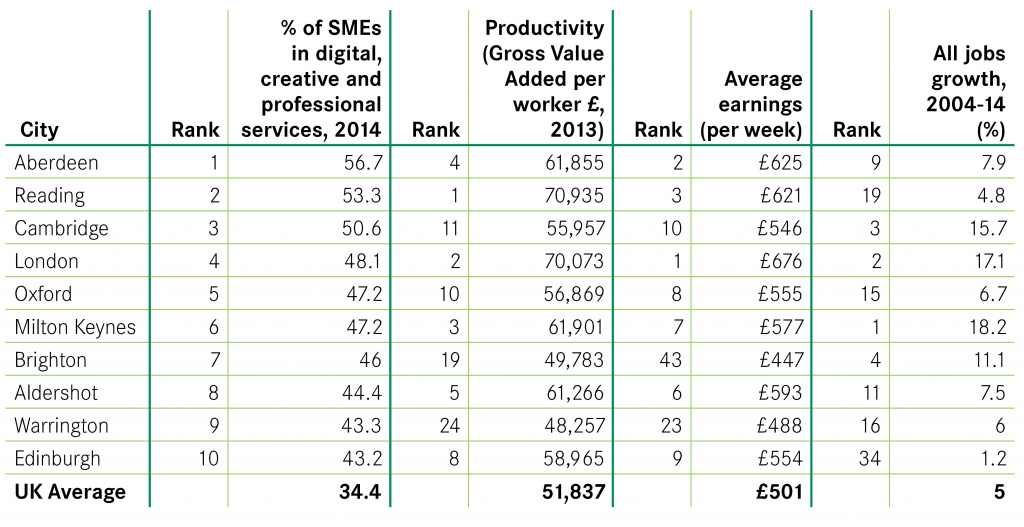 The report also shows that SMEs in ‘new work’ sectors are growing at a much faster rate in UK cities than small firms in traditional industries such as manufacturing and construction:

In contrast, only around one in five SMEs in Burnley and Doncaster are in ‘new work sectors’, the lowest concentrations in the UK. Burnley is also among the bottom ten cities in for jobs growth and average wages, while Doncaster is one of the ten least productive places in the country. The report warns that the uneven spread of ‘new work’ industries across cities is reinforcing economic disparities between different places.

“This report highlights that the world of work is changing, with big implications for how we support and grow our cities and the national economy. In recent decades, small innovative firms, taking advantage of technological advances, have started to play an increasingly important role in driving jobs growth, wages and productivity in UK cities. For places to prosper and grow, they need to consider how they can build on their existing strengths to support the kinds of highly-skilled and agile firms found in creative and professional industries, as well as the traditional focus on attracting inward investment from big businesses and multinationals.

“Helping these firms to grow should also be a top priority for the Government in its efforts to rebalance the national economy, including the ‘Northern Powerhouse’ initiative. Most importantly, the Government needs to give cities greater control over skills, infrastructure and spending, to help them become more responsive to the needs of local businesses.

“The Government’s plan to let local governments keep business rates is a welcome step towards giving cities more of the tools and flexibility they need to support local businesses. Local leaders should use these powers to create a better environment for innovative firms to thrive in, especially in places which have seen slow growth.

“That means, for example, improving digital infrastructure, tackling skill-gaps in the workforce, and helping local businesses to trade internationally. By doing so, cities can ensure they are in the strongest position to support the kinds of businesses which offer the best route to long-term growth and prosperity.”

Jason Eatock, Head of SME at the insurance group Zurich, which sponsored the report, said:

“This report is a fascinating insight into the development of one of the most exciting and rapidly growing sectors for the UK. It describes how creative, or ‘new work’, SMEs are playing a huge part in the UK’s ever-changing business environment.

“We should all look to support these SMEs across the UK, whether we are local government or big business. Small businesses are driving productivity and creating employment for their surrounding communities – as shown by the 22 per cent rise in employment within these ‘new work’ industries. This is all great news, but we must also pay attention to the report’s findings of economic disparity between UK regions, and continue to provide the support that SMEs need as they encounter new risks whilst they evolve and grow.”

(1) SMEs are defined as businesses with up to 249 employees

Centre for Cities is a research and policy institute, dedicated to improving the economic success of UK cities. We are a charity that works with cities, business and Whitehall to develop and implement policy that supports the performance of urban economies. We do this through impartial research and knowledge exchange. For more information, please visit centreforcities.org