There is overwhelming public support for devolution to many of England’s largest cities according to Centre for Cities’ polling by Savanta ComRes ahead of next month’s election.

The polling was commissioned to understand the impact of devolution and the offices of Mayor in Cambridgeshire and Peterborough, Greater London, Greater Manchester, the Liverpool City Region, Tees Valley, the West Midlands, the West of England and West Yorkshire.

On average, more than eight in ten (83%) people in city-regions going to the polls on 6 May support some form of greater devolution, with provision of affordable housing (51%), supporting businesses (47%) and providing access to skills and training (39%) the most common areas that people want to see devolved to local politicians.

Support for greater devolution rises as high as 87% in the Conservative-held Tees Valley city-region. In London and Greater Manchester, 85% of people support it.

This overwhelming support to move power out of Whitehall should encourage the Government to publish its delayed white paper on devolution in England and include substantial reforms to the way England is governed.

Most popular policy areas to devolve by city region 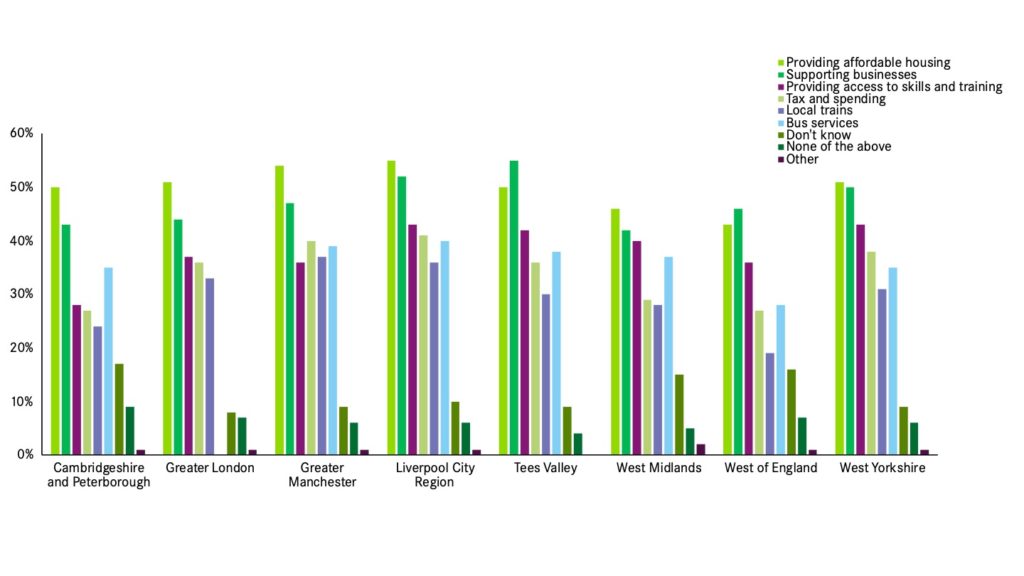 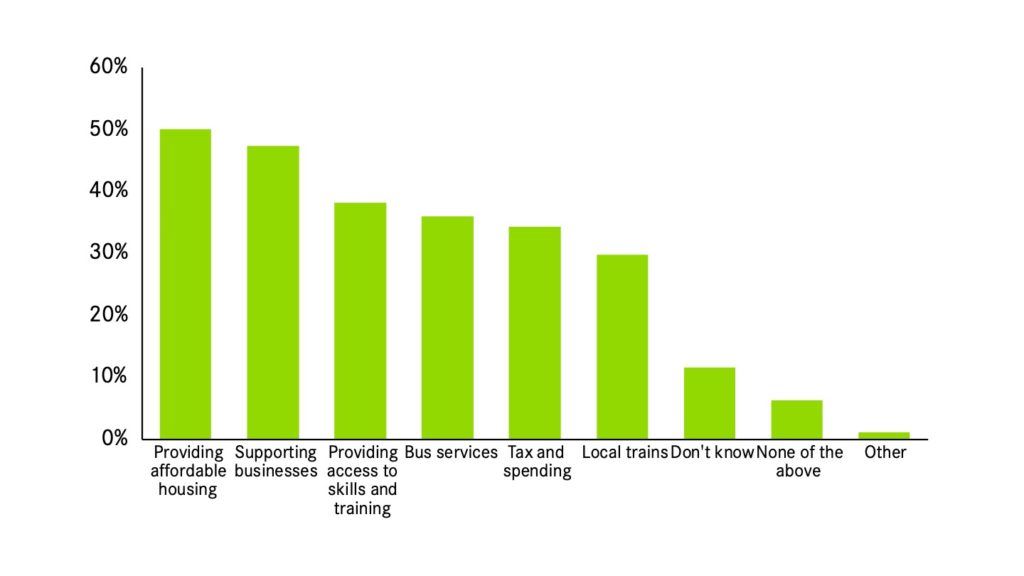 In West Yorkshire, which will choose its first metro-mayor on 6 May, less than half of people (44%) are aware of the election.

These results suggest that the Government must do more work to promote better understanding of recent reforms that introduced metro-mayors.

When asked to name their current mayor (or one of the candidates in the case of West Yorkshire) 33% of people across the cities give a correct answer.

The Mayors of Greater Manchester and Greater London have the highest name recognition, with 63% and 60% of people in their cities able to name them respectively. The Mayor of the West of England, who is not running again, has the lowest name recognition – 7% of people there can name them unprompted. For contrast, a 2012 Institute for Government study found that 8% of people could name their council leader. 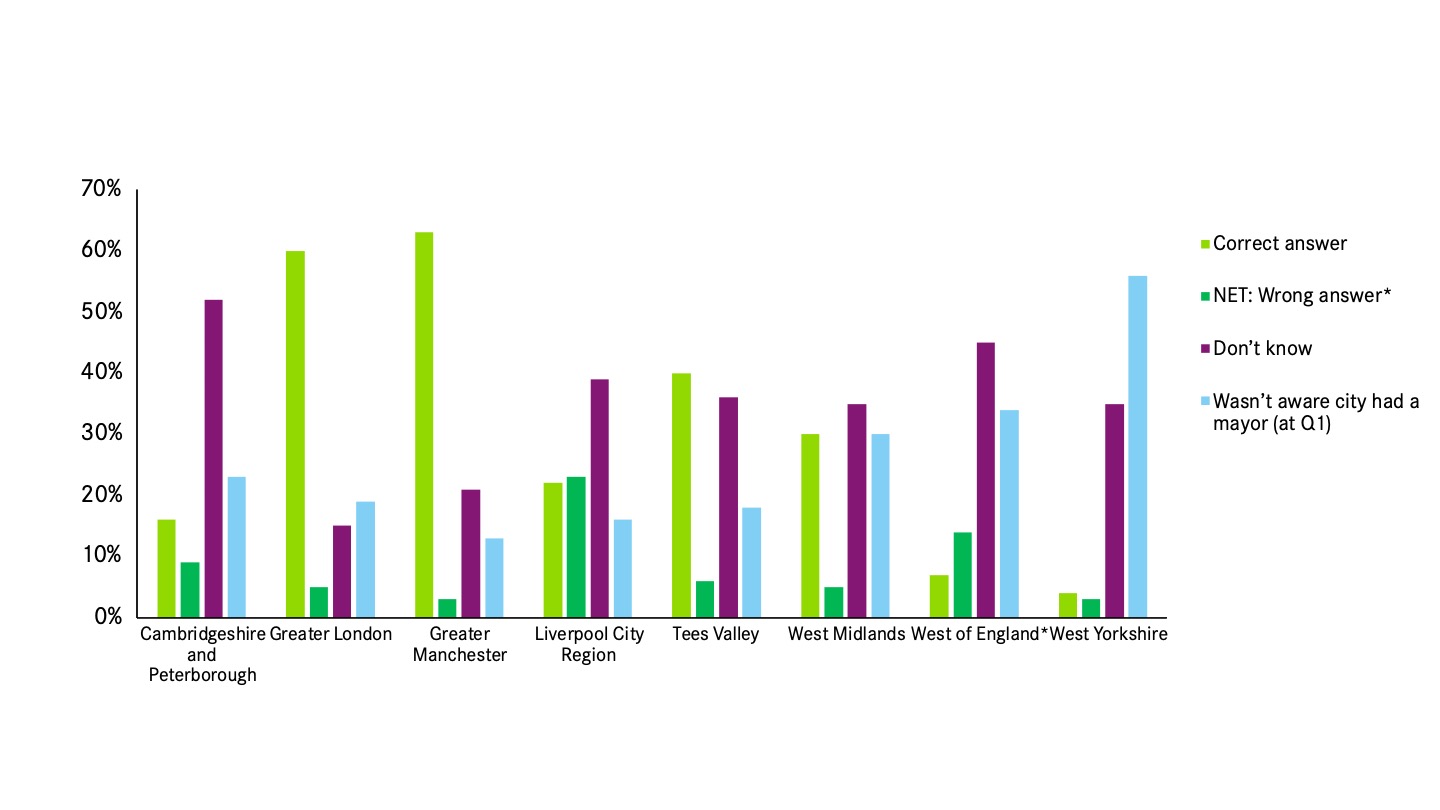 The Government has the highest approval rating in the West Midlands (+28), and the lowest in the Liverpool City Region (-8).

Handling of the pandemic 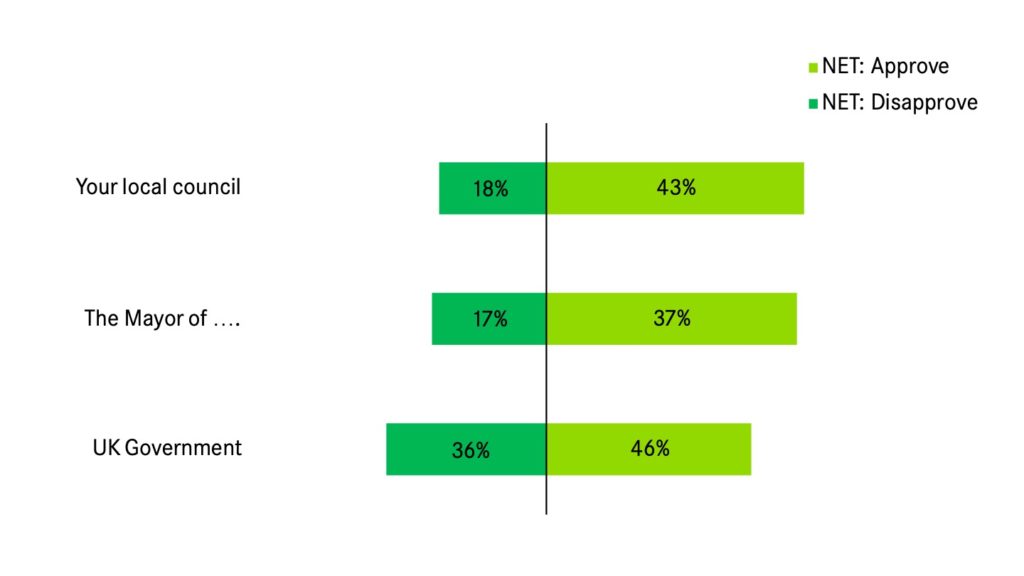 People’s priorities have shifted significantly during the pandemic. The importance of business support (+12), schools (+12) and adult education (+5) have all risen in the past year.* 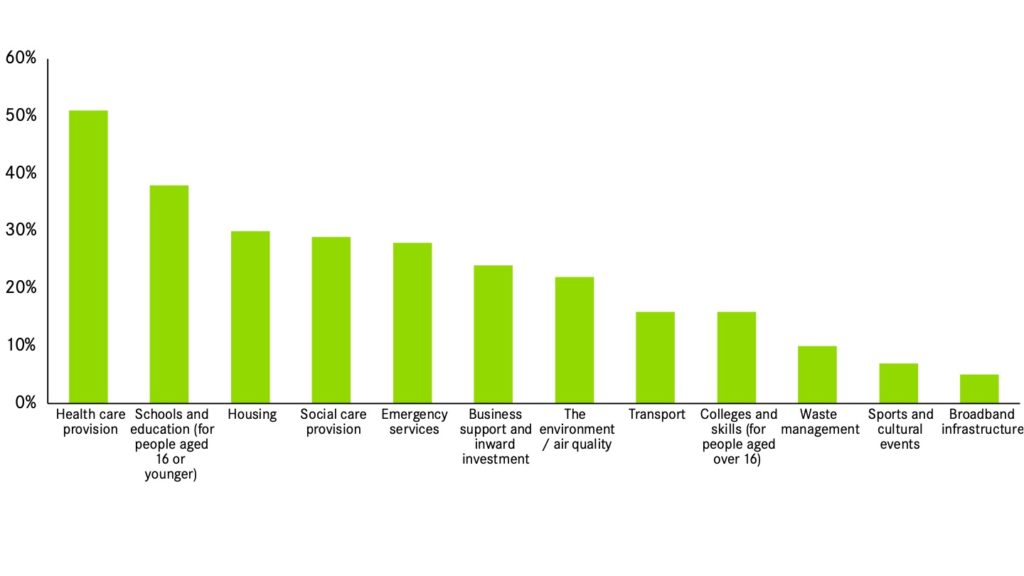 “People in England’s largest city regions overwhelmingly support shifting power out of Whitehall and down to their communities. Devolving more responsibility for providing affordable housing, supporting businesses and running adult education schemes are all popular with the public.

At the 2019 election, the Government backed the principle of more devolution in England yet, more than a year later, we are still waiting to see what its plans are.

“As places look to recover from the pandemic, it is vital that the Government listens to demands for more devolution and gives mayors and other local leaders the powers and resources to build back better. People want Whitehall to do less, it’s time for it to listen.”

Savanta ComRes interviewed 3,524 residents of Cambridgeshire and Peterborough (261), Greater London (606), Greater Manchester (565), the Liverpool City Region (508), Tees Valley (254), the West Midlands (526), the West of England (275) and West Yorkshire (529) aged 18+ between 26th February and 16th March 2021. Data were weighted to be demographically representative of each city region by age, gender, sub-region and social grade. Savanta ComRes is a member of the British Polling Council and abides by its rules.

*These figures show the change between the proportions selecting these answers across the 5 city-regions surveyed in 2020 (Greater London, Greater Manchester and the Liverpool, Tees Valley and West Midlands city regions), and the 8 city regions surveyed in 2021. This question included a new option in 2021, ‘The environment / air quality’, which may have influenced which answers were selected.