This is according to new analysis published today by the think tank Centre for Cities, which examines the impact of the business rates relief measures confirmed by the Chancellor in yesterday’s Budget statement.

The new measures include a cap on rates increases for small businesses coming out of small business rate relief, alongside restrictions on the rate decreases that firms in most parts of the country were expecting when the upcoming revaluation of the tax comes into places next month.

Analysis by the Centre for Cities shows that the relief measures will therefore benefit on average firms in only 12 English cities, most of which are located in the Greater South East, with London firms set to enjoy rates relief worth £477m in 2017-18.

In every other city in England firms are set to miss out on rates decreases worth £270m in total. Businesses in Manchester will be most affected by the cap on rates decreases, with firms in the city set to stump up £42m more in rates than they would have before the rates relief measures were announced. 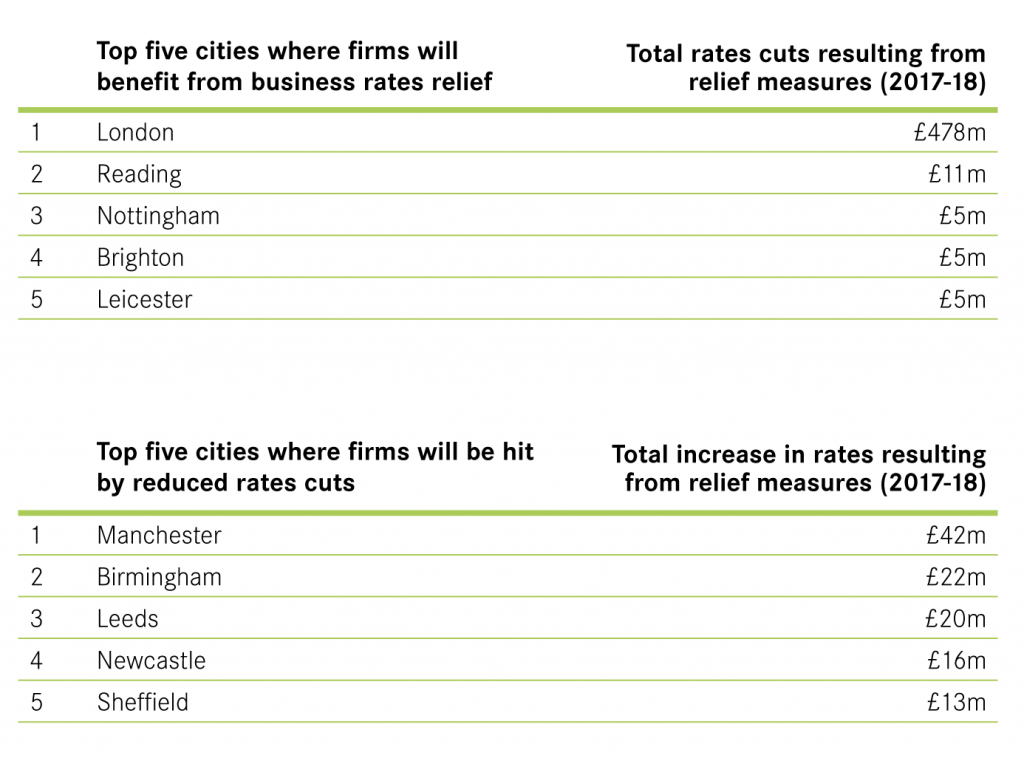 The Centre for Cities analysis also shows that retailers in the North will be particularly affected by the cap on rates decreases. For example, while Harrods and Selfridges will receive rates relief worth a combined £1.5m, retailers in Manchester will pay £27m more than they would have before the relief measures were confirmed.

“The Chancellor’s relief measures won’t address the instability in the business rates system, but will unfairly penalise businesses in less prosperous parts of the country such as the North, which have been overcharged in recent years. When we also consider the hike in National Insurance Contributions announced for self-employed people, it’s clear that Northern entrepreneurs have got a raw deal from this budget.

“The real problem with the business rates systems is that revaluations don’t take place regularly enough, which is why firms in successful cities like London were facing such dramatic increases in rates in the first place. However, the Chancellor missed the opportunity to address this problem by failing to commit to an earlier date for the next revaluation. Unless the Government acts to correct this problem, the business rate system will continue to be volatile, unfair and inaccurate.”

Data was not available for Scotland and Northern Ireland. Wales was also excluded from the analysis, as the Welsh Assembly has proposed different rates measures from those confirmed by the UK Government yesterday.

Buildings used for public sector uses, such as the activities of local and central government have been excluded to look at the likely impact on businesses. Properties in enterprise zones have not been excluded.