This is according to a report published today by the think tank Centre for Cities (with support from Capita), which examines for the first time the composition of commercial space in UK cities, and the implications this has for their economies.

It warns that struggling high streets have too many shops – but not enough demand for commercial space from other businesses, and other uses such as housing and leisure.

For example, in struggling city centres (1) – defined as those with small shares of highly productive firms and jobs – retail accounts for twice as much space as offices (measured in m2). In contrast, successful city centres (2) have more than three times more office space than retail.

Moreover, the report shows that the high number of empty shops in struggling city centres reflects broader economic challenges they face. For example, the centres of Newport and Blackpool – where retail accounts for half of commercial space, but 1 in 4 shops are vacant – have also seen a decrease in jobs in recent decades: 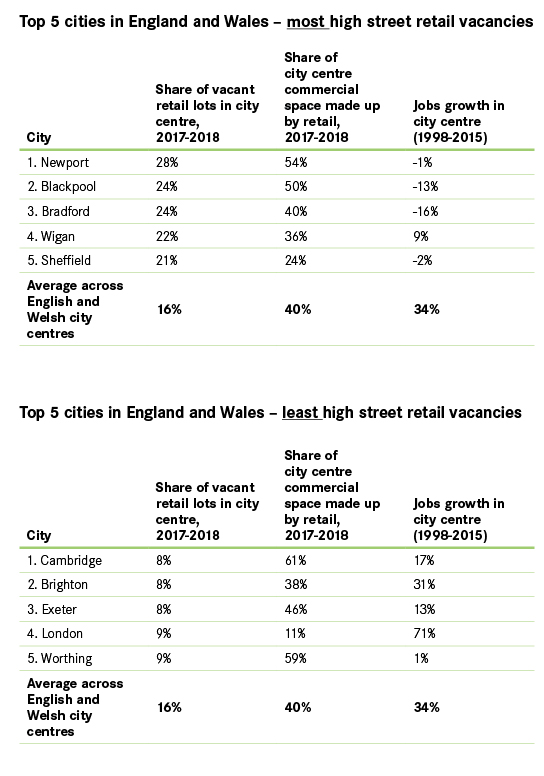 Commenting on these findings, Andrew Carter, Chief Executive of Centre for Cities, said:

The report makes a number of recommendations on the role of commercial space – alongside wider interventions on skills and transport – in the upcoming local industrial strategies (LIS), which places are developing as part of Government efforts to boost productivity:

“Each day seems to bring a new crisis for the high street, but the answer is not to double down on the declining retail sector. Instead, we need to reimagine struggling city centres as places where lots of different businesses can locate and create jobs – and where lots of people want to go to for a variety of reasons.

“This means reducing the reliance on shops, and focusing on creating a more attractive environment for a wider range of firms. We also need to make our high streets more open and appealing spaces for people to spend time or live in, by improving public realm and transport links, and potentially introducing more housing.

“Of course, repurposing high streets for other uses can be a difficult and costly process, and some cities will need investment from Government to support that transition. But it will  be crucial in transforming the fortunes of our city centres, and the prospects of people living or working in them.”

“The challenges facing our high streets and city centres are nothing new to those of us who work regularly in the retail sector. The need for strong, healthy town and city centres is clear, if they are to attract the footfall needed for our retail and leisure space to thrive.

“There is much that cities and the government can do to help support and bolster retail such as business rates reform. We should be levelling the tax playing field for physical stores and online operators as well as showing real leadership and support for the re-invention of places and introducing more flexible platform to harness new opportunities for regeneration/repurposing.

“Our challenge is to work collaboratively with all parties to make the changes set out in this report to help to create proper mixed use places, which include retail in well designed, publicly accessible and attractive places.”