The current Government was elected on a pledge to address regional inequality and to level up the country. Two years on, the exact definition of levelling up remains vague and the task has been made even more challenging due to the impact of Coronavirus. Centre for Cities’ ongoing work sets out the nature of the levelling up challenge, proposes actionable policy solutions and offers a framework for success so levelling up the UK can become a reality.

What does levelling up mean?

Despite using it many times, the Government has not defined what levelling up means. This has led to confusion about what it is that the Government wants to achieve through levelling up, with even the Prime Minister struggling to answer the question.

What should levelling up achieve?

Centre for Cities has set out its proposals on what levelling up should achieve. In brief, it says there should be two goals:

What do the public think about levelling up?

Centre for Cities’ recently conducted polling in partnership with ITV News and FocalData to gain a deeper understanding of the public’s views on levelling up.

We found that 42% of the public understand what levelling up means, but that this varies in different nations, with people in Wales and Scotland reporting the lowest understanding of it (31% and 29% respectively).

In terms of public confidence in the Government’s flagship agenda, 42% of those polled lack confidence that their area will be levelled up. This was highest in Scotland, Yorkshire and the Humber and North West England.

When it comes to what people want the levelling up agenda to achieve, 48% of people ranked better job opportunities as a top priority, this was followed by town centre regeneration and local transport improvements.

What should the Levelling Up Fund be spent on?

To level up left behind places the Government should move away from centrally controlled funding pots and devolve power and money to local leaders. However, there are several areas where the Government and local areas should focus spending to level up:

Where needs to be levelled up?

Cities and large towns in Northern England and the Midlands are among the places most in need of levelling up. Many lag far behind places in the Greater South East of England on a range of levelling up measures. For example:

The North lags the South on a range of indicators

Skills and productivity in particular directly impact people’s personal prosperity: People in London are paid £16,150 more per year on average than people in Burnley. 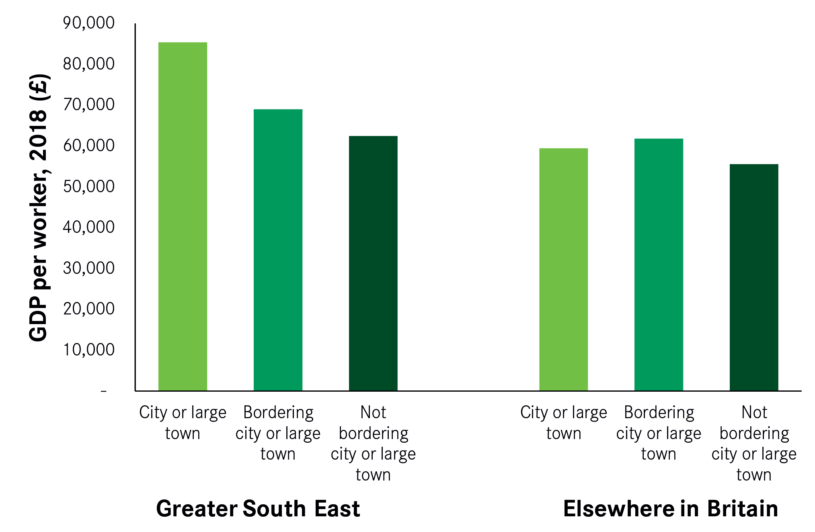 Note: Four local authorities that border a city have been classed as more rural because of their size. These are County Durham, Northumberland, Scottish Borders and Powys.

The pandemic has made this north-south divide even worse. Our 2021 Cities Outlook research found that Covid-19’s economic damage makes the promise to level up the North and Midlands four times harder and risks levelling down prosperous places in southern England. Birmingham, Hull and Blackpool face the biggest challenges.

The impact of the pandemic on the UK job market 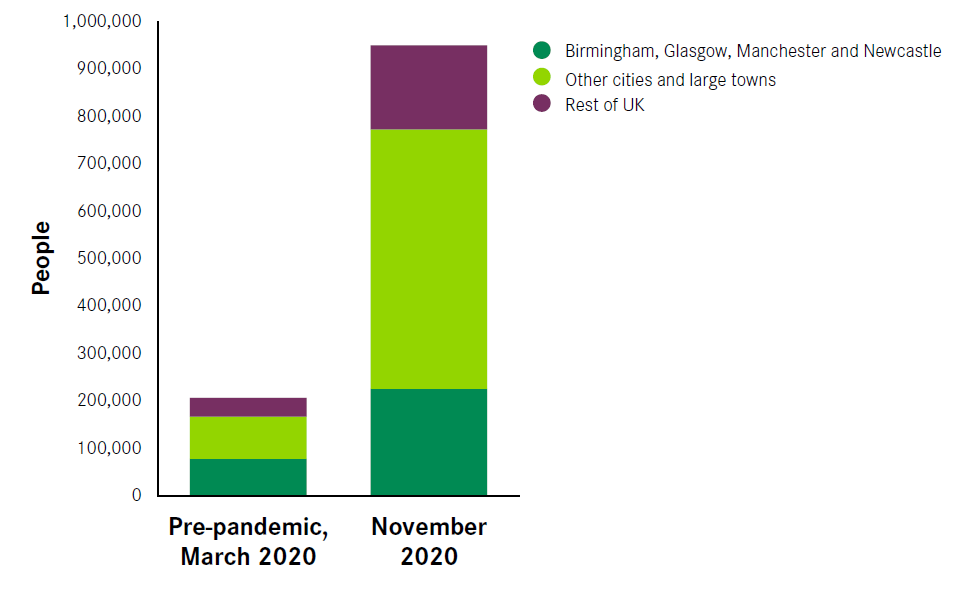 However, policy makers should not forget that some places in the south also need to be levelled up, particularly due to the pandemic. Many southern cities that were previously reliant on the aviation industry are now struggling – in particular Crawley, Slough and Luton.

The Government’s English Devolution White Paper has been replaced by the Levelling Up White Paper. This may suggest that devolution is now less of a priority for the Government than it was when it committed to doing the original White Paper, but the Prime Minister has said that the Government is considering plans for further devolution within England.

As part of this, Centre for Cities proposes a wholescale transformation of English local governance in which: 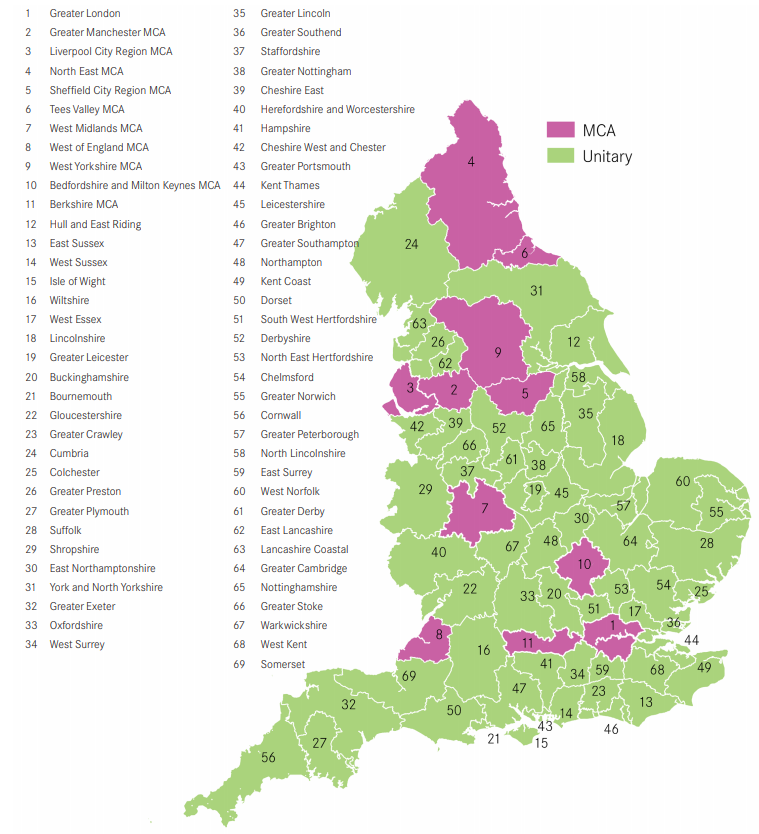 When will the Levelling Up White Paper be published?

The Government has said that it will be published ‘later this year’, but as yet has not committed to any specific time frame.

Who is writing the Levelling Up White Paper?

The Prime Minister has appointed Neil O’Brien, MP for Harborough, as his advisor on levelling up, as well as forming a levelling up unit within the Cabinet Office. Centre for Cities understands that other departments, such as BEIS and MHCLG are also helping to produce the White Paper.

Centre for Cities' work on levelling up

Because the vast majority of UK economic activity takes place in the largest 63 cities and towns, they are crucial to the levelling up agenda. Our work analyses what levelling up is, what it should aim to achieve and a strategy for achieving it.

This briefing uses the theory of economic complexity to show how the economies of Britain’s cities and large towns have developed over time and sets out the implications for how the Government should approach its levelling up agenda.

City Minutes: how to level up the UK

Our latest podcast mini-series explores the regional inequalities that different parts of the UK face, with a focus on which policies the Government should implement to bridge these divides and level up the country.

City Minutes: How to level up… transport

Researcher Tom Sells on how to reform the transport system to level up the UK's largest cities and towns.

Events: the levelling up dilemma

Our latest four-part event series welcomes city leaders, policy makers and leading thinkers to unpick the levelling up dilemma from various angles. Book your place at upcoming events or watch previous events back to catch up on key insights and discussions.

Join us to explore the levelling up dilemmas

Our work on levelling up the UK

A collection of views from urban leaders across the country in advance of the Levelling Up White Paper.

City Talks: Think Tank views – what should be in the Levelling Up White Paper?

Andrew Carter speaks to policy experts Will Tanner, Carys Roberts and Nick Bowes, to get their views on what should be included in the upcoming Levelling Up White Paper.

While an increase in the National Living Wage would help people in economically weaker places, it will not address the structural problems they face which cause low wages in the first place

Scotland is largely missing from discussions on levelling up. But levelling up the economy will require policy to pull up Glasgow.

Levelling up
Levelling up requires cities to build new strengths, not build on their existing strengths

City Talks: What can German reunification teach the UK about levelling up?

Andrew Carter is joined by three experts to discuss what the German experience can teach the UK about levelling up.

Devolution Levelling up Productivity
What can German reunification teach the UK about levelling up?

City Talks: Ben Houchen on his vision for Tees Valley

Ben Houchen on what levelling up means for Tees Valley and his vision for the city region.

To level up the country, the Government should encourage the increasingly complex, high-skilled, high-paying sectors that are choosing to locate in big cities.