“A country that is not able to find opportunity for its youth is in trouble”. This is Sergio Arzeni, former Director at the OECD, giving his departing speech at the OECD LEED conference last week. He’s referring to the UK, which ranks in the top five countries with the highest youth unemployment in the OECD (as a proportion of the total 16-24 population). The headlines from last month’s labour market update tell us that unemployment is continuing to fall and wage growth is accelerating in the UK. Youth unemployment has also fallen. But this is the national picture; it’s not the full story. 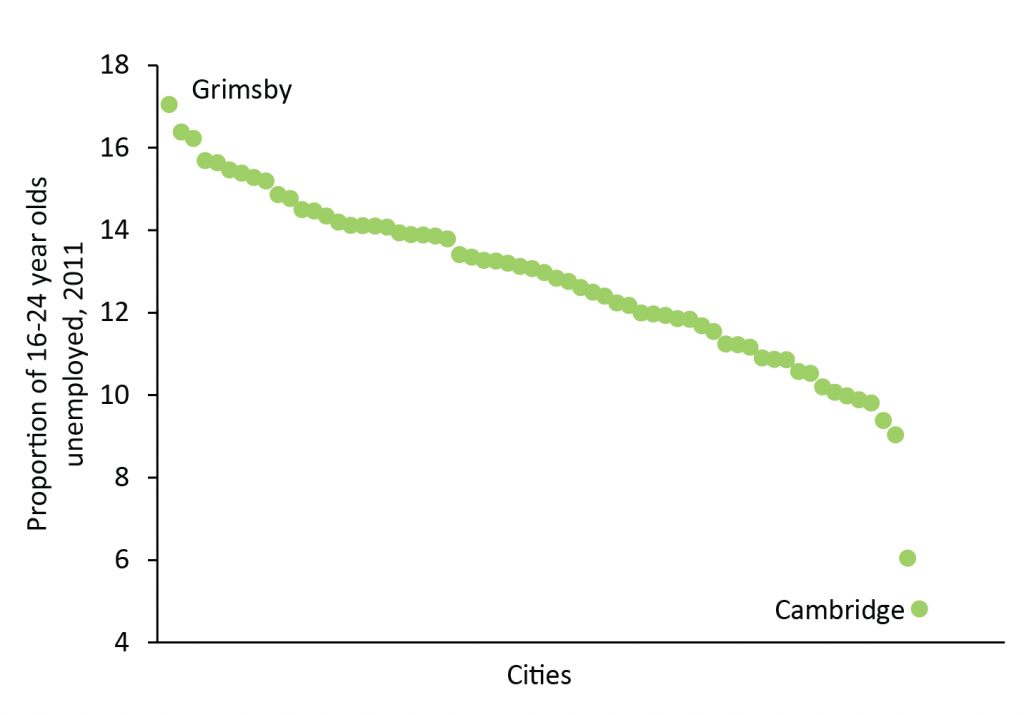 Source: Census 2011. Note we have deliberately taken the number of young people as a proportion of all young people so that figures are not distorted by high numbers of young people in full-time education. Map this data on our Data Tool.

In general, there is a smaller gap between the two indicators in cities with high youth unemployment – or in other words, there is a higher propensity for young people in these cities to claim unemployment benefits. This may be because spells of unemployment are more frequent and longer in duration, or because financial support isn’t available elsewhere. 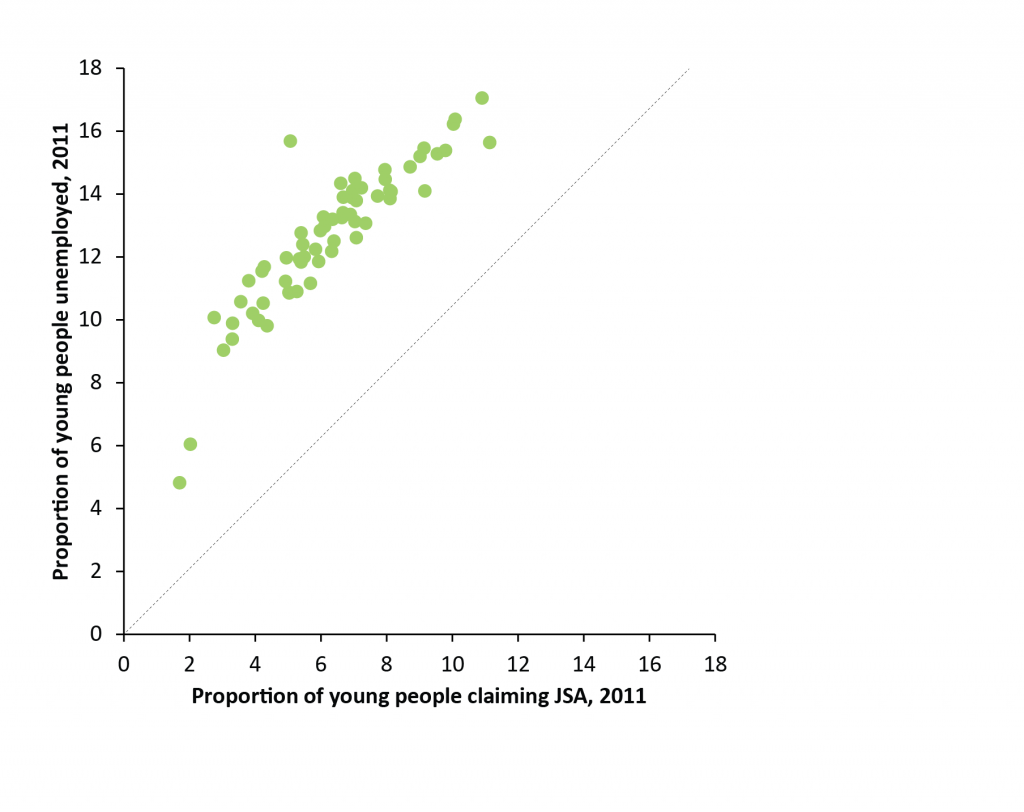 3) 2 in 5 young unemployed people in cities do not have five good GCSEs.

Nearly 40 per cent of young people in cities do not have five good GCSEs (Figure 3) and this rises to 58 per cent in Grimsby.

Young people without five good GCSEs (below level 2) are 1.4 times more likely to be unemployed than their peers. Raising qualifications is an important part of supporting young people into work but not the only answer. In some cases employer recruitment practices may act as a barrier to young people finding suitable employment.

Figure 3: Share of youth unemployment in cities by highest level of qualification, 2011 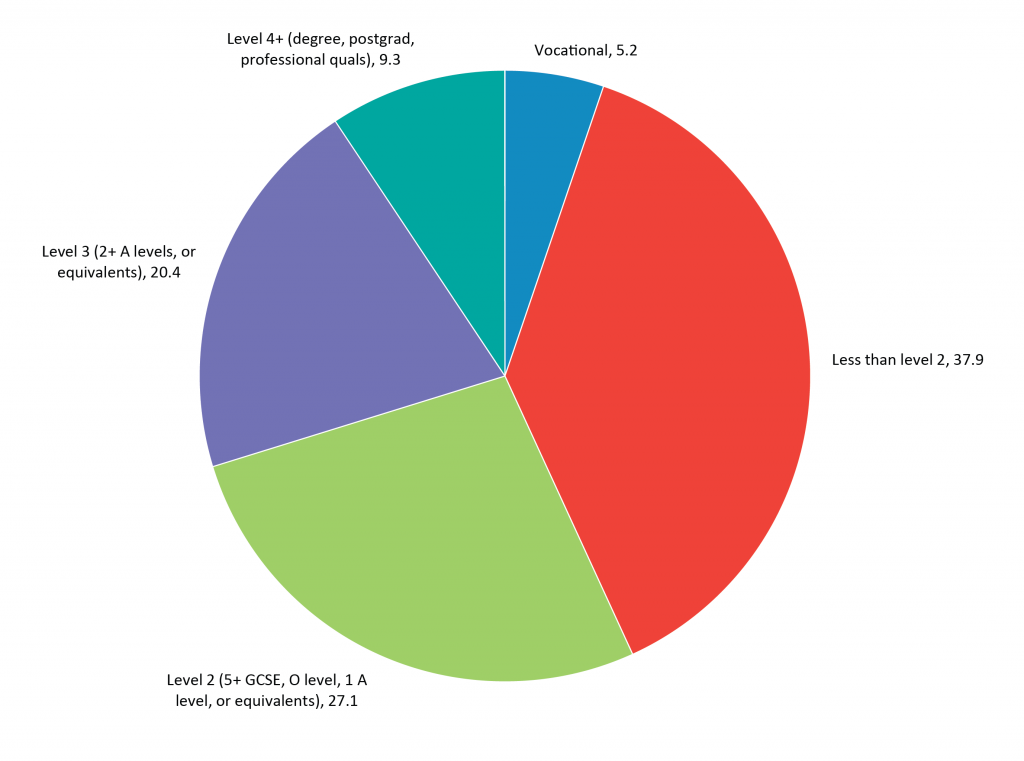 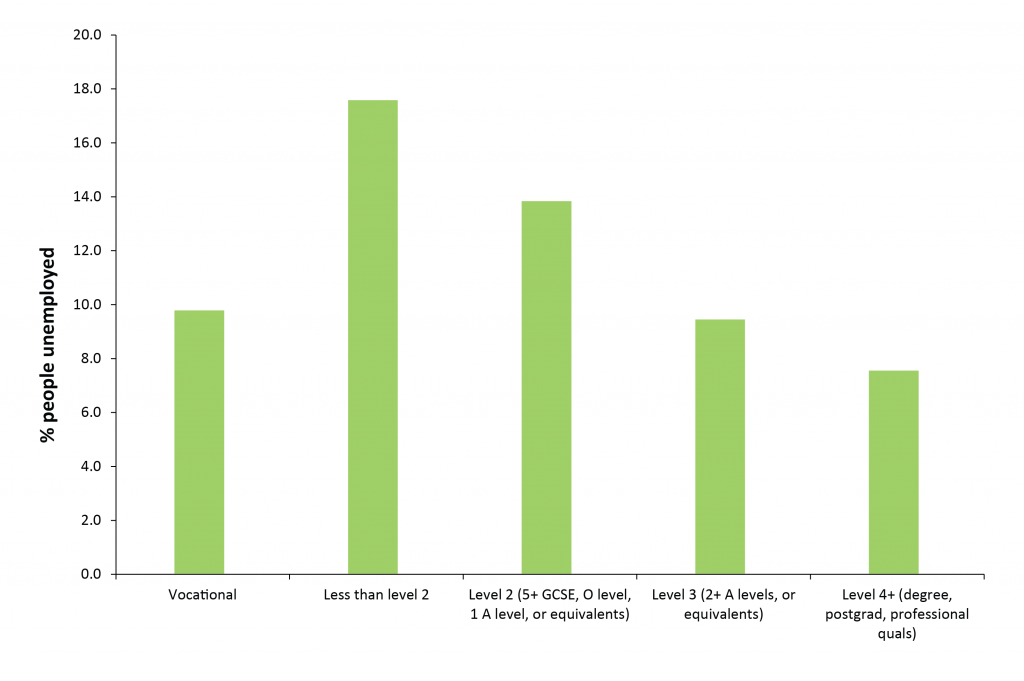 4) Nearly 1 in 2 young unemployed people in cities have never worked.

Young people are often caught in a ‘Catch 22’ situation – it’s hard to get a job without work experience, but without a job it’s difficult to gain work experience. 45 per cent of young unemployed people in cities have never worked. This is the average across all cities – it tends to be higher in cities with high youth unemployment. It also compares with 11 per cent of unemployed people among the older working age groups.

Young people’s access to work experience varies enormously in different parts of the country. In Hull and the Humber, for example, an area with some of the highest youth unemployment rates in the country, just 29 per cent of employers offer work experience compared to over 46 per cent in Cheshire and Warrington. 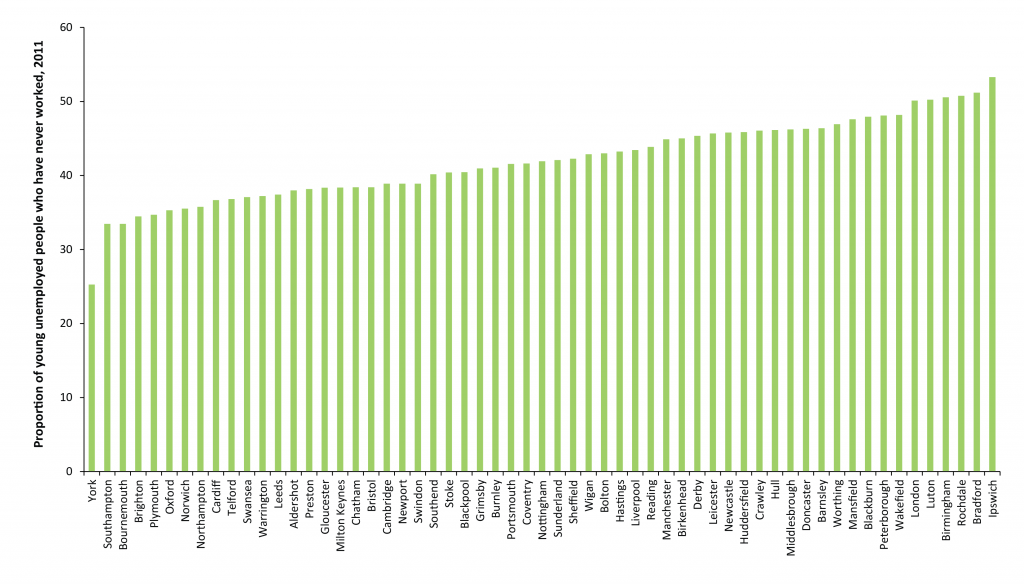 Just over 10 per cent of all young people are unemployed. The youth unemployed proportion is more than double the total number of 16 to 64 year olds unemployed, 4.4 per cent.

An additional 6.6 per cent young people that would like a job but are not actively looking for one – the ‘hidden unemployed’ – and a further 4.6 per cent of young people are working part-time because they couldn’t find a full-time job – the ‘underemployed’. Taken together, the youth ‘underutilisation’ rate stands at 21.4 per cent. In Greater Manchester and Merseyside, this figure rises to over 30 per cent. 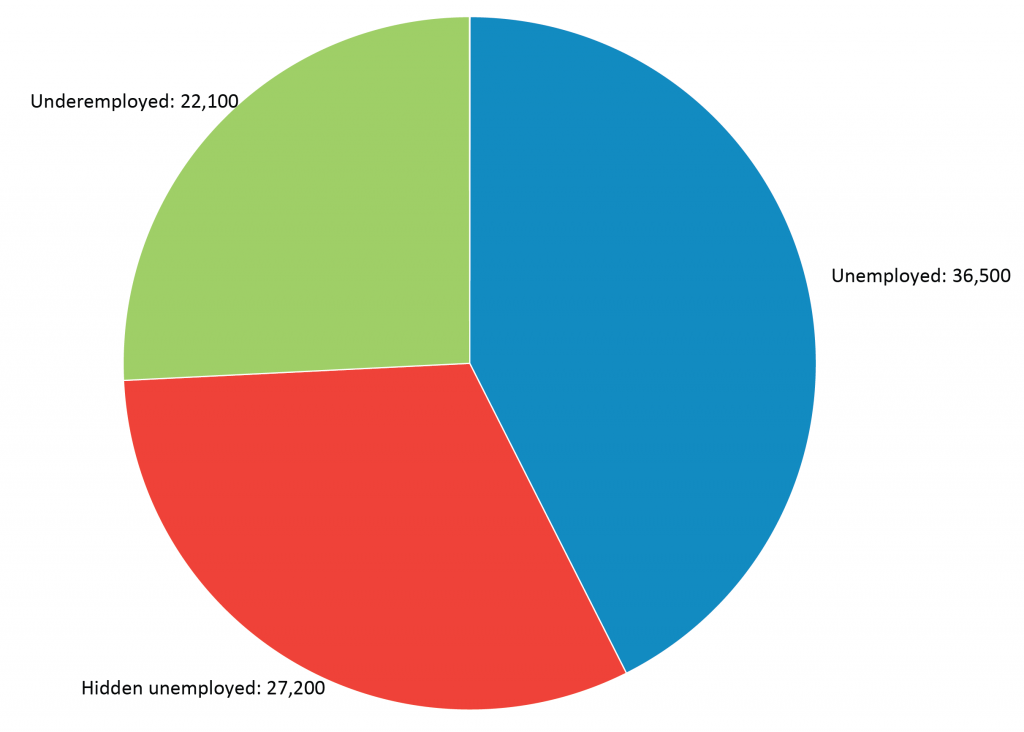 All of this requires bringing cross-sector leaders including employers together – as we explored in our previous report, Youth Opportunity: Lessons from US cities on improving young people’s employment prospects – to address the complex barriers that young people can face. Austerity presents some major challenges to those trying to deliver support to young people but it also creates additional urgency for cross-sector leaders to come together to find and deliver solutions.