This month’s labour market (this information will be available soon through our Data Tool) statistics suggest the economy has picked up since the start of the year. But the claimant count data also indicates a sharp rise in long term unemployment over the last year: people are now staying on unemployment benefits for longer.

The increase is particularly striking amongst 16 to 24 year olds. Historically young people have tended to move off benefits more quickly than others and they still do: 11% of 16 to 24 year olds have been on benefit for more than a year compared to 22% across all ages. 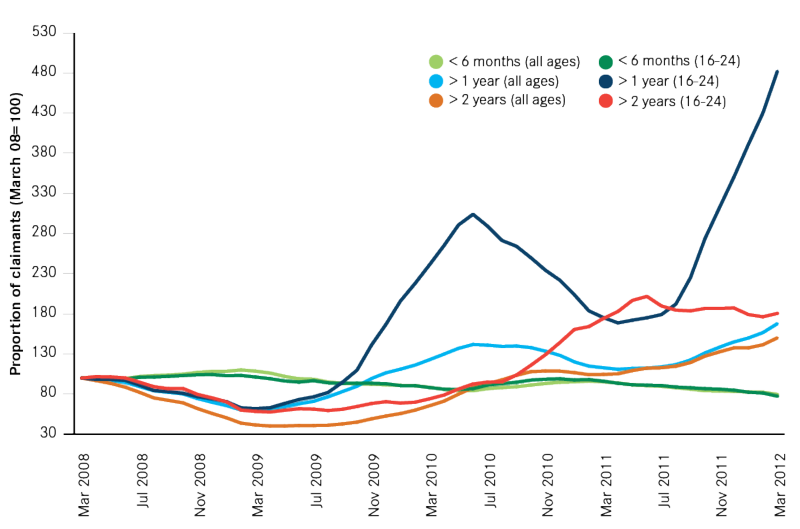 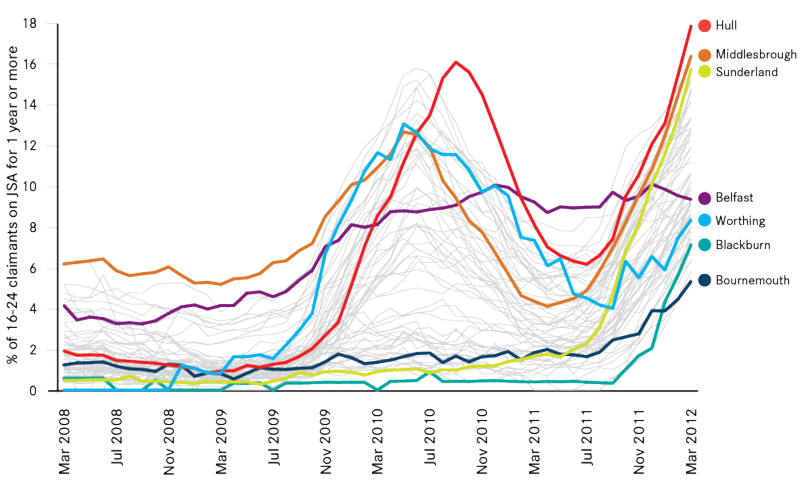 But elsewhere in the UK, figures are now rising even in cities that had low rates at the height of the recession. Prior to 2011 the proportion of young people on benefits in Sunderland at no point exceeded 2%. In Blackburn no more than 1% of young people had been on JSA for more than a year.

Broad trends show (as expected) that young people are more likely to get stuck on benefits in cities with the highest youth unemployment rates. In Hull, for example, the youth claimant rate stands at 11%; nearly a fifth of these young people have been unemployed for more than a year (an increase from less than 2% at the start of the recession).

Employment providers may be becoming overwhelmed by the scale of the challenge in these areas. Longer term trends also point to the issue of low labour market demand in some places; a problem current welfare-to-work schemes are unlikely to be able to do much about in isolation.

But the latest figures on the shift towards long-term youth unemployment raises further questions about the impact of recent policy decisions – from the cancellation of the Future Jobs Fund and JobCentre Plus reforms to the new Youth Contract. There is clearly an urgent need to understand why these figures have rocketed over the last year – and why the same is not true in Belfast, a city exempt from many of the recent reforms.

Early analysis published by the DWP shows that young people who have taken part in the government-backed work experience programme are more likely to find work – by around 16%. Clearly more needs to be done.

Individuals often face multiple barriers to work; from lack of skills and work experience to lack of childcare or transport to low demand from employers. As we have highlighted in our past research, tackling any one of these barriers in isolation is likely to be insufficient in reducing unemployment. Further enhancement of the Youth Contract, for example, may increase the likelihood of young people finding sustainable employment.