Secondary school leavers in Japan achieve a higher literacy level on average than graduates in England. This is just one of the findings from the OECD’s first international Survey of Adult Skills, which reveals that young people in England and Northern Ireland (NI) fall significantly behind many of their peers in other countries on literacy and numeracy.

The results may help shed some light on why youth unemployment started to rise in the years prior to the recession in the UK. The survey shows that, in contrast to other countries, there has been no significant improvement in core skills across generations in England/NI. As a result, young people are entering a more demanding labour market without the skills to compete.

The survey directly measures the proficiency in numeracy, literacy and problem-solving skills of over 160,000 adults across 22 OECD member countries. The broad findings for 16-65 year olds show that England/NI achieves average scores in literacy and problem solving, but falls below the average on numeracy. More worryingly, young people fall significantly behind the average on all three measures.

Past research tells us this is likely to have a major impact on their life chances; people with low literacy levels are twice as likely to be unemployed. It also has implications for the competitiveness of the UK economy on a global stage. As other countries overtake the UK, our share of the global talent pool is falling. Without access to the right skills, businesses and countries will struggle to compete.

A large part of the challenge is to address inequalities within countries; “nine-tenths of overall variation in literacy skills observed through the survey lies within, rather than between, countries”. Our work on educational attainment indicates just how large the gap is likely to be between cities. Formal education is one of the main mechanisms through which numeracy and literacy skills are developed. As a result, educational attainment is positively related to proficiency in numeracy and literacy.

The government needs to ensure that more young people in cities such as Hull and Barnsley are leaving school with adequate skills to enable them to go on to further education and/or sustainable employment.

The UK also needs to ensure that all cities are delivering for their most disadvantaged pupils. Social background has a bigger impact on literacy skills in the UK than most other countries. Pupils from disadvantaged backgrounds fall behind their peers in both English and Maths in all cities and some of the biggest gaps are found in the most affluent parts of the country.

Of course there are no easy solutions and it’s not all about schools. And much of this needs to be driven by national government. But the experience of London schools and the impact of City Challenge show that things can be turned around. Without intervention, gaps within the UK and between other countries will almost inevitably grow. 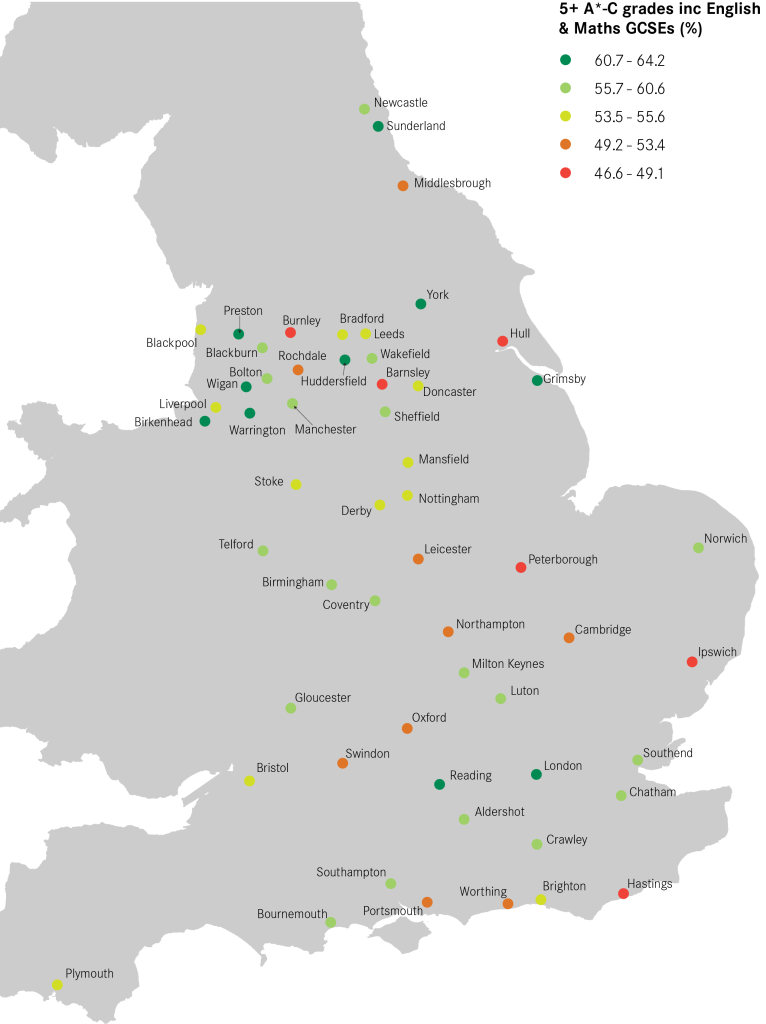