Last year, 4.4 million UK workers (14%) worked mainly from home. Working from home is becoming more popular, at an increasingly fast pace: today there are approximately 35 per cent more home workers than there used to be in 2011, and approximately 50 per cent more compared to 1998. As technological change revolutionises the way we work, it’s very likely that the share of home workers will continue to rise in the future.

Behind the headline national statistics, home working plays out very differently across the country and it tends to be much more popular in cities with stronger economies.

To look at the detail, we have to go back to the 2011 Census which shows that Brighton is the city with the highest share of workers working from home (just over  12%), followed by Bournemouth (just under 12%) and Aldershot (11%). With the exception of Blackpool, all the cities with the highest share of home working are strong economies and have a higher share of home workers than the national average (10%). At the other end of the scale are cities with weaker economies, such as Hull, Liverpool and Sunderland, where home workers represent only 6 per cent, or less, of the workforce. 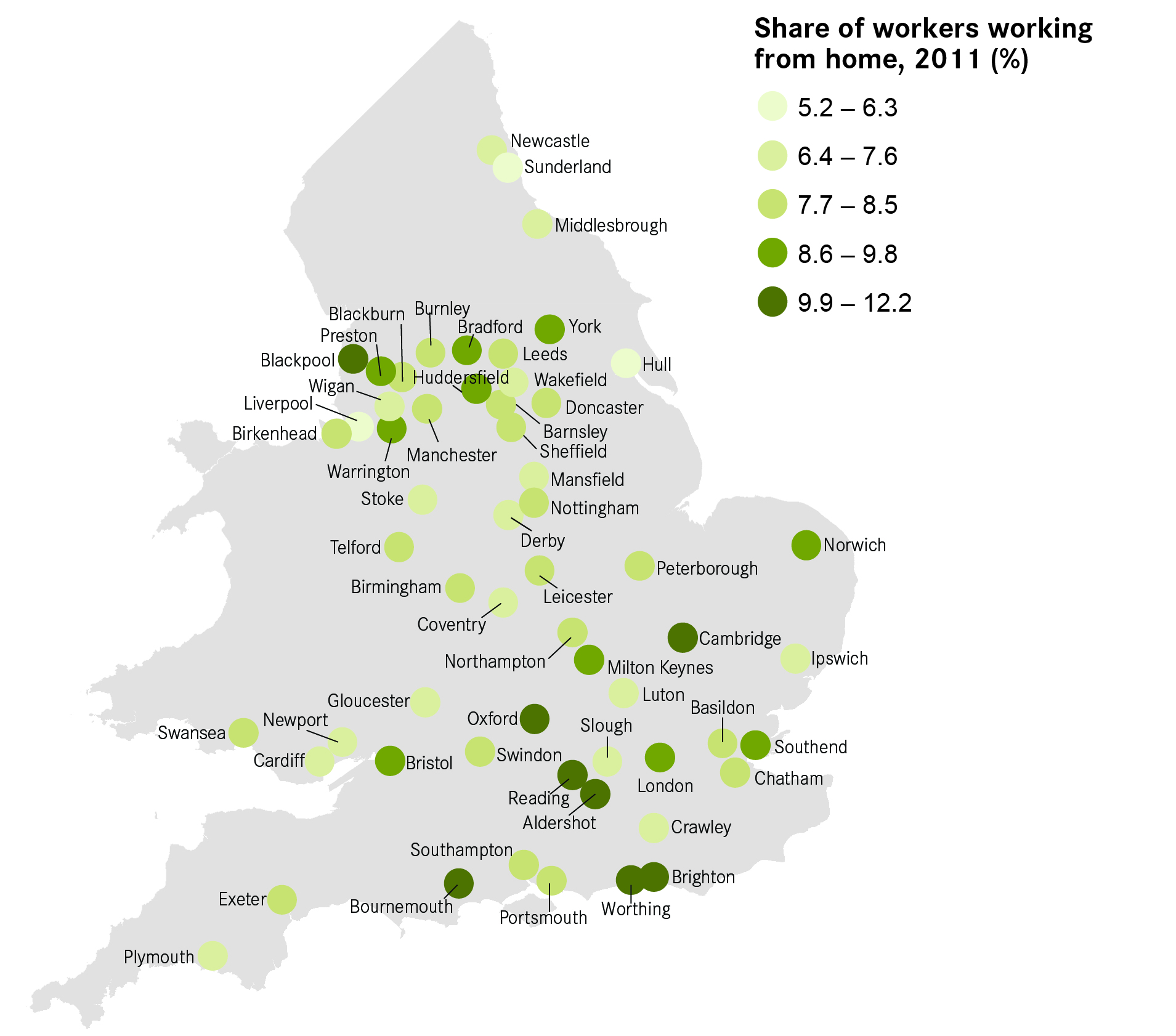 That technology is revolutionising the way we work, particularly in our most successful cities, raises interesting questions about the role these cities will play in the future economy. For a long time, these cities have been the drivers of economic growth, attracting highly-productive, high-skilled businesses by offering them easy – albeit expensive – access to large pools of skilled workers and shared knowledge.

But if remote working means businesses do no longer need to locate next to workers, and technology allows us to transfer knowledge to the other side of the world in the blink of an eye, does this mean the importance of cities to the UK economy will diminish over time?

Face-to-face interaction is the common denominator across occupations very likely to increase by 2030. According to Nesta, education and healthcare occupations, together with private sector occupations like hospitality, sport and fitness and elementary services, are all set to increase over the next decade or so.  Most of these occupations require workers to be in direct contact with their clients and customers, many of whom live and work in cities.

The nature of jobs is also changing, with a significant shift towards interpersonal and analytical skills. As our report shows, over the last decade, many manual, routinised jobs have been automated, while skills like persuasion, service orientation, negotiation and social perceptiveness have become bigger requirements of most existing jobs. Given that these skills are best deployed and improved through face-to-face interactions, it’s likely that cities will continue to provide the ideal platform to enable such in-person exchanges to take place.

So while technological innovation and changing working practices provide the opportunity for more and more people to work in different, more flexible ways, the changes to the overall demand for jobs – and for tasks within jobs – are actually going in the opposite direction.

For this reason, the rise of the robots is strengthening – rather than undermining – the role of cities as drivers of economic growth. At least for now!