It may not feel quite as relatable as housing, but the UK is approaching a new property crisis in commercial space. While the cost of a home is a live policy issue across UK cities, mainly in the South East, the cost and availability of commercial property have been less of a talking point. But a balance has to be struck between providing enough homes, without squeezing out the commercial space needed to house new businesses.

Take some of England’s biggest and most vibrant city centres such as Birmingham, Liverpool and Manchester. These places are playing an ever more important role as interesting and dynamic places to live, but they are also increasingly becoming the preferred locations for businesses in highly productive, highly skilled industries. And it is actually the economic successes in these urban centres that help drive more and more people to choose to live there.

But as our latest report City Space Race shows, policies including ‘Brownfield-first’ approaches to development and Permitted Development Rights (PDR), designed to help more and more people to live in lively city centres are having a detrimental impact on the ability of firms to locate in those same centres.  Our most vibrant cities are now seeing growing competition for space between commercial and residential demands.

Cities now face tough choices about how land is used. They want to attract more jobs, protect the nightlife and culture which make them vibrant, and house more residents, but city centre space is naturally very limited.

The challenge for policymakers is to decide what should be prioritised in these central areas. Given the growing preference of higher-skilled businesses to locate in city centres because of the access to networks and infrastructure these locations bring, protecting city centre commercial space will be even more important, not just to cities, but to the national economy too.

The problem is that current policy actually threatens commercial space, rather than prioritising it. The persistence of the brownfield-first approach has restricted city expansion, and political resistance to opening up small parts of green belt has both led to less available land for more homes and placed commercial space in further direct competition with residential property. More recently, the introduction of commercial to residential permitted development rights (PDR) has had a significant effect on how land is allocated.

In order to boost housing delivery, since 2013 developers have been able to convert offices into homes (but not the other way around) without any involvement from the local planning authority – a win for those in favour of reduced planning regulation. In several cities with strong residential markets, such as Crawley, Slough and Reading, this aim has been achieved, as shown in the map below. In Crawley, for example, nearly half of the new homes delivered between 2015 and 2017 were via office to residential PDR, and in Slough this figure was 34 per cent.

Office to residential conversions as a share of total office stock 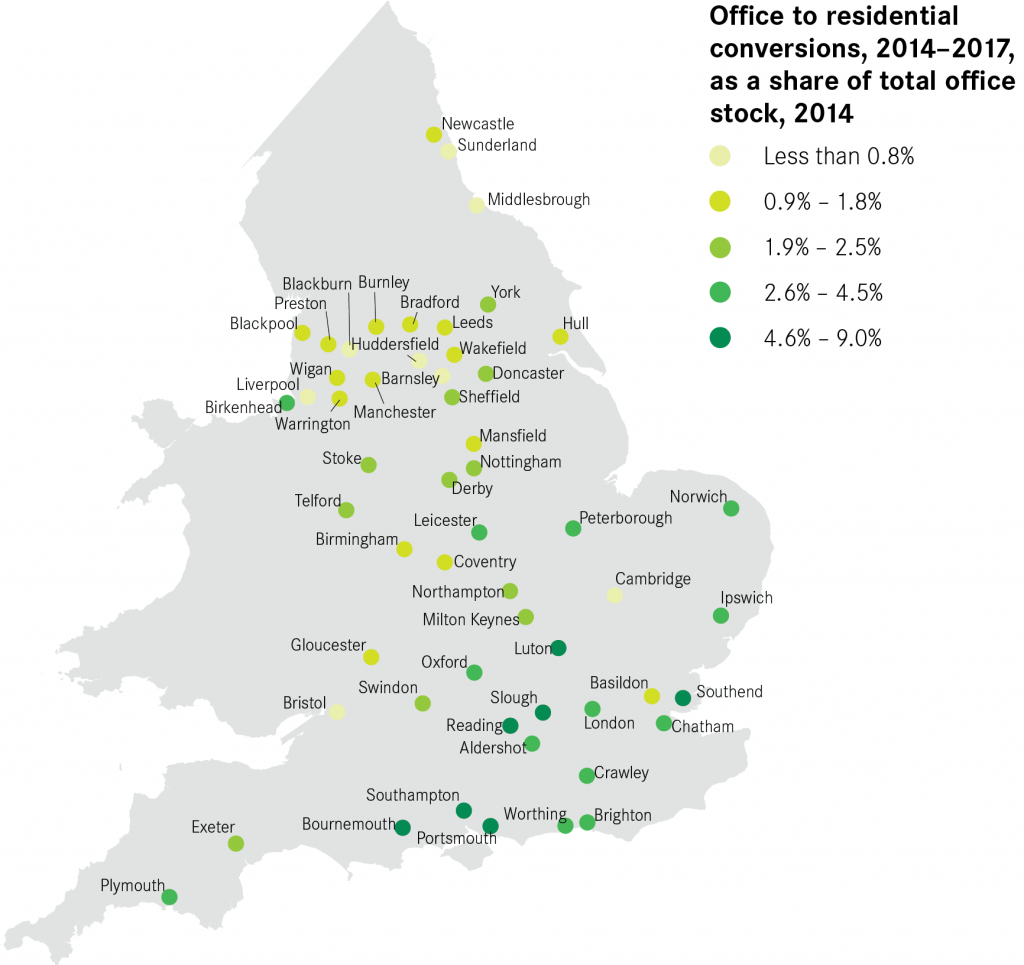 But these homes have come at the expense of offices and could have a damaging impact on local economies. While conversion is beneficial for outdated, vacant properties – indeed converting empty commercial space was a big factor in introducing the policy – in the most successful city centres, the policy has instead eaten into occupied commercial property because of the bigger returns residential development can bring.

To compound matters further, a second aim of PDR was to revive struggling high streets and bring footfall back to city centres, but the policy has not been taken up in these places because they have low residential demand. With no impact on weaker city economies and a negative impact on stronger ones, PDR has demonstrated exactly how setting policy at a national level can offer very little gain city by city.

To protect commercial space, national government must offer all city centres an exemption from PDR, allowing planning authorities to make decisions about more suited to the needs of their economy. This will enable successful city centres, which are under pressure to accommodate growth, to ensure sufficient commercial property is provided to sustain their economic success. At the same time, cities and national government must consider where restrictions on city expansion and densification can be relaxed to enable more housing to be delivered in less central areas, where the demand for commercial space is much lower.

We should be ambitious about making the most of UK city centres. But we also need to be realistic about the trade-offs that need to be made to maintain their success. Carefully balancing the demands for commercial and residential property across cities will be crucial for their future prosperity and the people who live in them.

High Streets Housing
Housing Levelling up
Targeting land banking is only tackling a symptom, not providing a cure