Rishi Sunak is reportedly set to announce the most significant increase to the National Living Wage since the financial crisis as part of his levelling up agenda, with the ambition to turn the UK “towards a high-wage, high-skill, high-productivity economy”.

An increase in wages would certainly be a good thing for the low paid, and it is the most direct way that policy can deal with lower pay, but it is very unlikely that it would help level up the country. In order to see a sustainable increase in wages, policymakers cannot only artificially push up wages, they also need to find ways to increase productivity.

Figure 1 shows that many of the places which would benefit the most from an increase to the National Living Wage are those with the largest levelling up challenges. Table 1 shows that Burnley, Blackburn and Southend are amongst the cities which would benefit the most as just above 30 per cent of their workers are currently on the lowest wages, while Oxford, Cambridge and London would be impacted the least. Interestingly, Burnley is also the most equal city in the UK, simply because so many people are on low wages.

Note: The numbers are estimates only and do also include workers that are younger than 23 and get a National Living Wage at a lower rate.

Using statute to increase wages would be a good way to quickly address inequalities in a place, but it would do nothing to address the structural challenges which are the cause of the low wages in the first place: lots of people with no qualifications and few higher skilled, higher paying businesses.

Figure 2 shows that places with a high share of population with no skills also have a higher share of workers receiving the National Living Wage. Burnley, the city that would benefit most from a National Living Wage increase, is also the city with the highest share of unskilled adults. Due to their lack of qualifications, it is difficult for them to find a higher paid job and consequently they are paid less.

An increase in wages would help them in the short-term but it would do little to improve their qualifications and help them get a better paid job – which will be essential to levelling up. This is why skills policy needs to be central to the levelling up agenda.

Figure 2: Share of people with no qualifications and proportion of jobs affected by an increase in National Living Wage 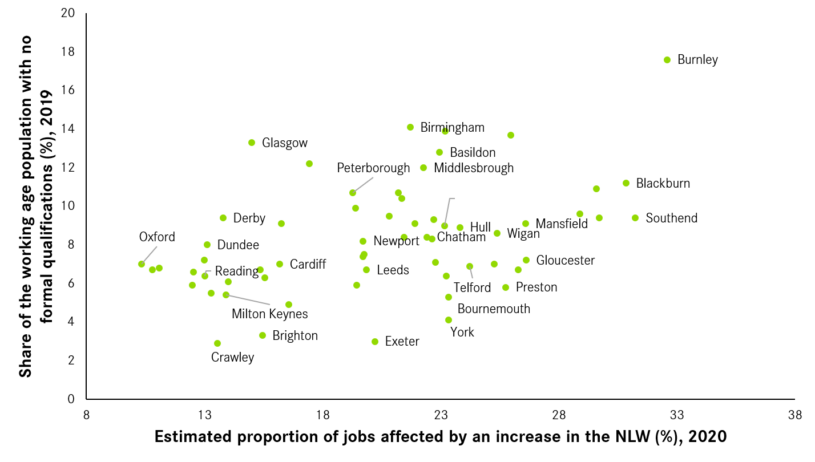 In contrast, there is a chance that an increase in wages could end up hurting the places it’s intended to help instead of bringing more prosperity to the place.  This is because places with a large low wage sector are at higher risk of automation because in the long-run, people‘s jobs could be replaced by machines if their wages are higher than their output.

To level up weaker parts of the country - in addition to increasing the skills of the population - Boris Johnson should focus on increasing the number of productive businesses in economically underperforming places.

Figure 3 shows that places which have many people employed in Knowledge Intensive Business Services (KIBS) are also those where people would benefit least from an increase to the National Living Wage because most of them are already paid more.

Reading and London, where around 25 per cent of the workforce is employed in KIBS have the smallest shares of people who would be affected by an increase to the National Living Wage. 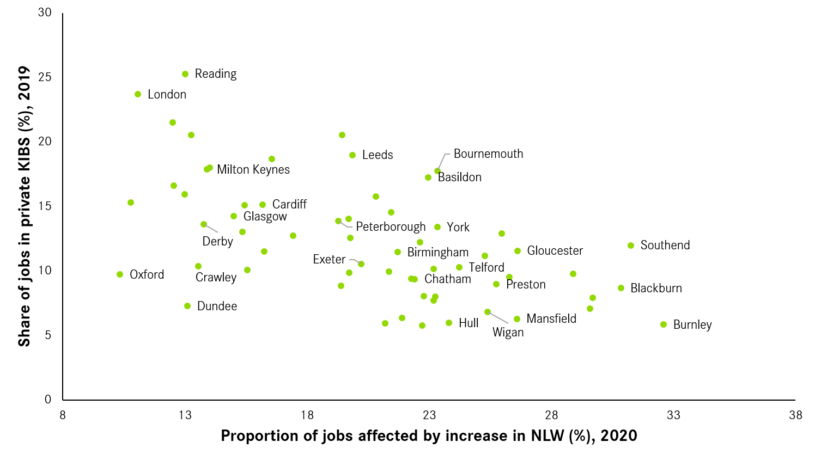 The data above suggests that increasing the National Living Wage will only be a short-lived remedy for the deeper structural challenges that some UK cities are grappling with. While an increase in the minimum wage would help to address inequalities in the short-term, a focus on productivity is central to sustainable growth in the long-term.

Therefore, addressing issues such as improving skills and how to make cities more attractive places to do business, must be at the core of any policy on how to level up the country.

Detailed recommendations are set out in our latest briefing: So you want to level up?