Buses have long been underappreciated in the UK. In the debates that rage around public transport, the bus seems to lose out to other modes in the battle for attention that has an impact on policymakers.

The traditional New Year uproar over train fares rises is one example of this trend. But it goes unremarked that bus fares have risen in line with rail fares over the last 30 years, with both growing at nearly twice the level of inflation (in contrast, the real cost of motoring has fallen in that period, which is much worse news for buses than trains).

And who does this bus fare inflation primarily affect? People from the poorest fifth of households catch nearly 10 times as many buses as trains, but buses become much less popular relative to trains as household incomes rise. As we go up the income scale, that ratio shrinks to 7:1 for the second lowest quintile of household, then 3:1 and 2.4:1, until we get to the richest fifth of people, who on average catch more trains than buses.

In other words, the political and media obsession with rail fares is to the detriment of poorer people in cities across the country. 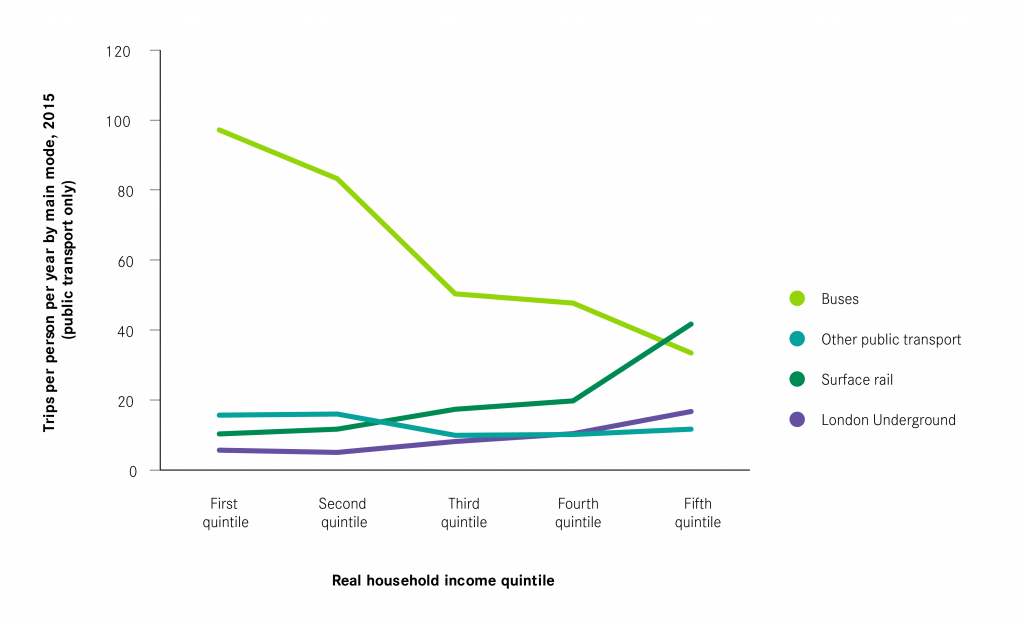 This is one good reason why buses should have a more prominent place in the national debate about public transport – but there are many others:

1. The scale of bus usage is huge, especially relative to rail/light rail usage outside London.

Buses are the workhorses of local transport systems. The National Travel Survey shows that in urban areas outside of London, around 6 per cent of all journeys are made on buses exclusively – much more than via rail, which accounts for only 0.5 per cent of all journeys, in seventh place behind cars, walking, buses, bicycles, taxis and other modes of transport.

Around half of multimode journeys include rail usage, but even if we add those to journeys taken exclusively on trains, that still equates to less than a quarter of the number of bus journeys in cities beyond the capital. Bus services reach into almost every corner of our cities linking neighbouring areas together. Trains play much more limited role in local travel in most cities, in fact 64 per cent of train journeys begin or end in London (which nonetheless accounts for over half of bus journeys in England).  As such, the debate about train fares is primarily of interest to people in London and its surrounding areas. In contrast buses, by far the main mode of public transport in cities elsewhere in the country, barely get a mention in public discussions around transport.

2. Buses are a brilliant – and undervalued – mode of transport.

We might not think of them as being the newest technology or hugely innovative. However, the modern bus – running in a well organised, integrated transport network – offers economic, financial, social, cultural, and environmental qualities it would be foolish to look past. For example, a large modern diesel bus can be up to 500 times less toxic (per passenger) than some small modern diesel cars. Around 22 per cent of bus journeys are commutes, underlining their importance as mode of transport for people getting to work (this figure is bigger in London, where buses are cheaper, more plentiful and more integrated in to the transport system).

We’ll explore these qualities in more detail in a subsequent blog, but suffice to say that buses offer benefits that other transport modes do not, and deserve a greater role in the debate on public transport on this basis alone.

3. Bus services are under threat.

Despite some notable exception such as Brighton, Merseyside and Nottingham, journeys have fallen in most cities over recent years. The reasons for this are numerous: some people have been tempted into cars because driving, or being driven, is cheaper. Others may be put off buses because the reliability/efficiency/regularity/price have deteriorated, possibly driven by reduced local authority subsidies. Research by the Campaign for Better Transport shows that since 2010-11 a total of £73.8 million has been cut from supported bus services in England, a reduction of 25 per cent. But the decline of the bus – if allowed to continue – will be result longer traffic jams, dirtier air, and less active, prosperous or integrated cities.

Moreover, the scale of bus usage means that any falls in journey numbers have a big impact on overall public transport usage in a city. In South Yorkshire, a 20 per cent fall between 2010 and 2016 equated to around 15 million few journeys per year – greater in absolute terms than the entire annual ridership of the Sheffield Supertram network, which carries around 12.6 million passengers. 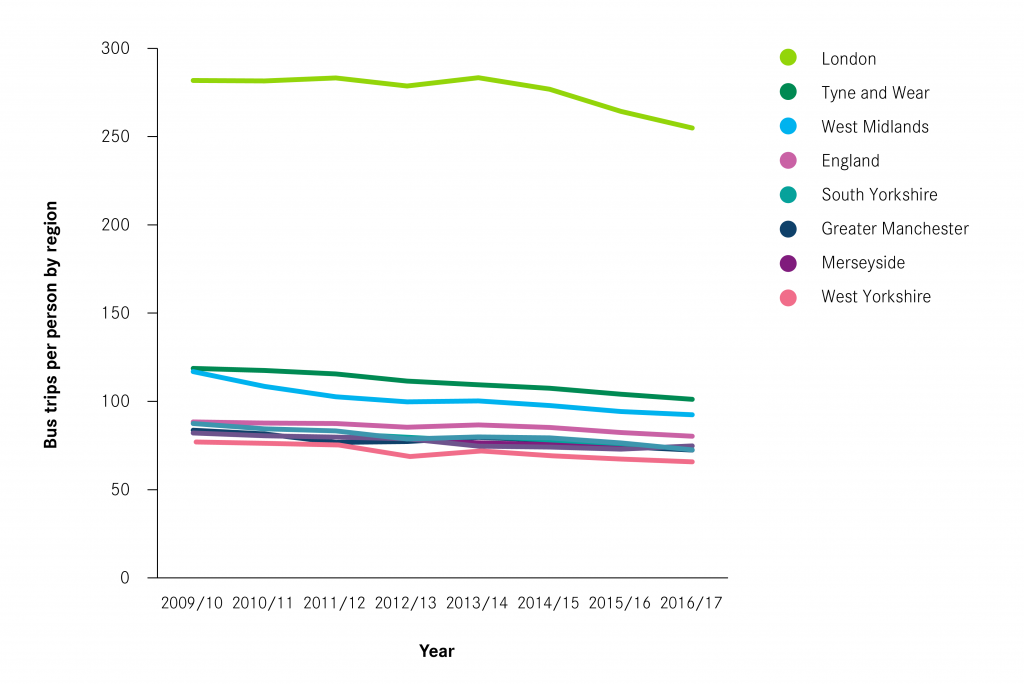 The truth about trains

Compared to this, trains appear to be in rude health, if a little cramped and expensive at rush hour. Rail passenger numbers have doubled in 20 years. On some parts of the network in the South East growth has outstripped even that – the Thameslink franchise has seen numbers double in just 10 years and now carries around one in five of all rail passengers in the UK.

The railways are fantastic feats of engineering. They stand apart from other modes of transport by physically standing apart: they have the privilege of operating on their own network completely free of any other kinds of traffic, apart from freight trains and the occasional level crossing.

It’s fair to argue that we need more and better trains. But whatever the problems with the existing rail system, the threats to bus services across the country are deserving of a much greater focus in national conversations about transport.

These threats have started to get some national media coverage outside in recent months – for example, the BBC highlighted the issue of shrinking services last month as part of its collaboration with local media. But as Chris Todd from the Campaign for Better Transport points out, getting buses up the policy agenda to where they need to be is not helped by the probability that journalists and politicians catch the train more than the bus.

And with national media and politics so focused on London – where bus quality and usage has flourished since the start of the millennium – even those that do catch the bus won’t be having a representative experience. Personal experience can have a huge impact on public policy. This can be for good if it is representative of the broad spectrum of experience. But if it is narrow and unrepresentative, it can blinker policy and warp its focus. Putting more powers and funding in the hands of cities is one way to avoid some of the biggest blunders that this can create.

Buses deserve and demand a bigger place in the transport debate. Much of what makes trains work in this country – franchising, focus and funding – would be fantastic for our bus networks and our cities.

Hopefully this is what the Bus Services Act will help bring to cities with metro mayors.