This week is officially #EmptyHomesWeek2021, and various organisations have spent the past few days posting about how they intend to address the housing crisis by reducing the number of empty homes. But while there is nothing wrong with bringing derelict homes back into use, this sentiment gets the logic of the housing shortage the wrong way round. Cities need to build so much that the number of empty homes rises, creating a surplus of stock that puts pressure on landlords and developers to provide residents with cheaper and better housing.

Statistics on empty homes are often alarming at first glance. For instance, 268,000 homes have been identified in England as “long-term empty” (empty and unused for more than six months, which can be identified by council tax data). This does not include “unoccupied” homes which are empty for a short period between moves, or the in-use dwellings registered as “second homes”. A simple “supply and demand” story would initially suggest that at least some of these “extra” homes could be put to good use housing people.

But while this sounds like a lot, it is not actually that many compared to the total 24,400,000 homes in England. Long term vacant homes are only 1.1 per cent of the total housing stock.

Furthermore, England appears to have an unusually low housing vacancy rate compared to other countries. For example, the Netherlands in 2014 had 272,000 long-term empty homes – but as the Netherlands is a much smaller country than England, this is 3.6 per cent of the total housing stock. Likewise, 5.6 per cent of Japanese homes are long term vacant. In fact, every country in Europe has a higher share of unoccupied homes (i.e. short and long-term empty) than the UK, except Poland.

The most unaffordable cities have the fewest empty homes

Looking at cities, we can see that some parts of the UK have even fewer empty homes. Figure 1 from our report last year Planning for the Future, shows that a number of places in the South, with more expensive housing and higher demand, had extra low vacancy rates in 2019, such as 0.7 per cent in London, 0.5 per cent in Cambridge, and 0.1 per cent in Crawley. 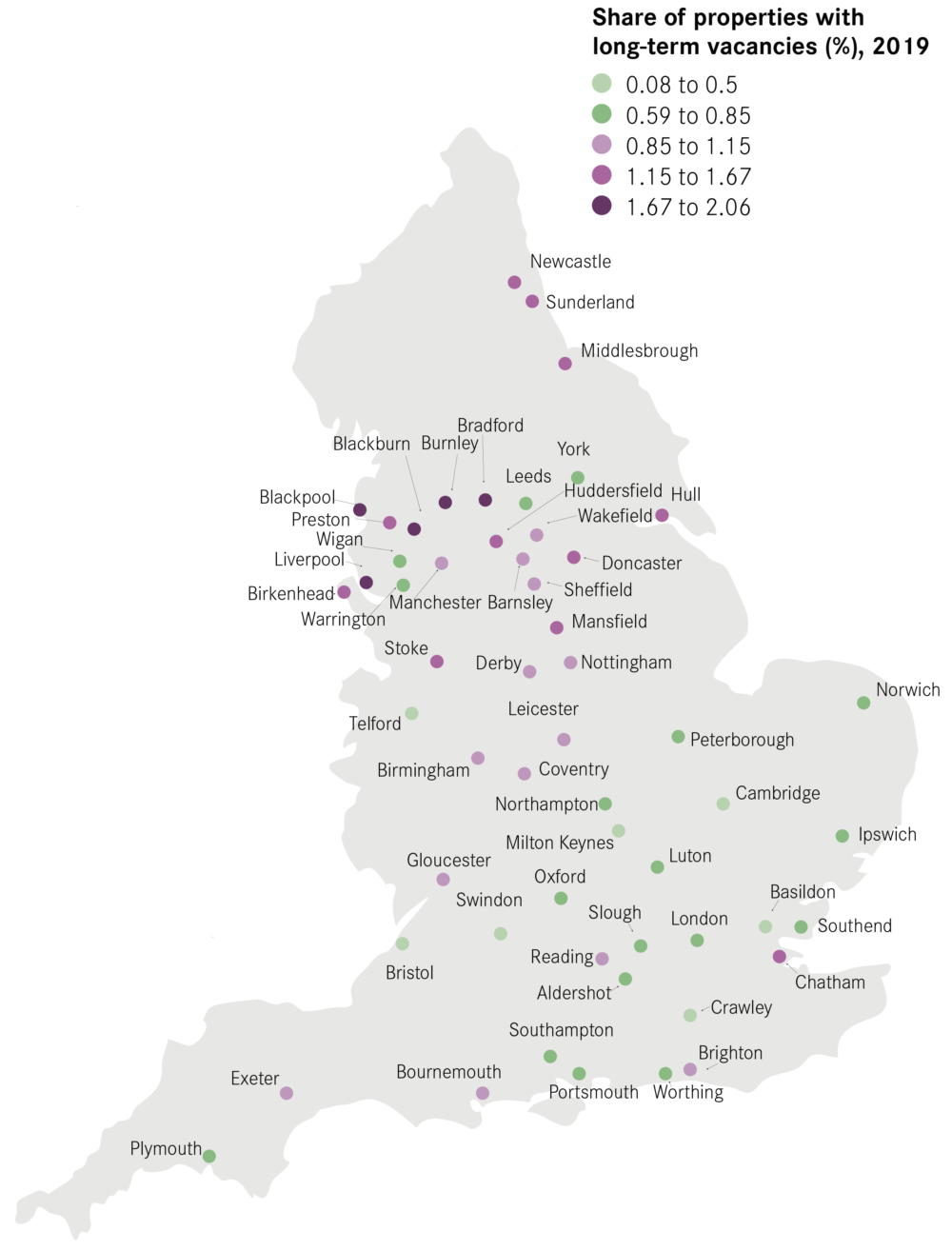 In contrast, there are more empty homes in cities in the Midlands and North of England where demand and housing costs are lower. However, even these vacancy rates are still low. For example, Tokyo has a higher long-term vacancy rate (2.4 per cent) than Burnley does (2.1 per cent), the most affordable urban area in the UK.

Altogether, this suggests that more empty homes mean more affordable housing. The widespread belief that empty homes are a policy failure is therefore misguided – a city with no empty homes would be facing severe housing problems! The simple “supply and demand” story that these properties can be easily brought back into use appears to be flawed.

The reason why is that even when homes are empty, they still play an important role in the housing market. A large surplus of unused homes signals to local landlords that renters have plenty of options in a ‘buyer’s market’ and will be looking for a good deal. In contrast, very few empty homes tells landlords and developers that the city’s existing housing stock is nearly exhausted, and that there is a ‘seller’s market’ where residents have little power and must put up with poor quality and expensive housing.

We need planning reform to increase the number of empty homes

Unfortunately, English housing markets are a seller’s market, as the current planning system rations out the supply of new homes. Its discretionary, case-by-case granting of permissions ensures there is a permanent and systemic shortage of homes.

Ending the housing crisis does not therefore just mean a few extra houses. We need to build more homes than we will actually use, so many that the number of empty homes rises in cities, as poorer quality properties become difficult to let and sell to residents. Landlords will face tighter competition, and residents get more power if we get more empty homes and a buyer’s market.

In turn this requires comprehensive planning reform, and a new flexible zoning system where developers must be granted planning permission if they follow the rules. Centre for Cities has previously set out how this could be done in our Planning for the Future report, and in our response to the Government’s Planning White Paper consultation.

This does not mean that efforts to bring individual, derelict homes back into use are wrong. But it does mean that the efforts of campaigners and councils to reduce city-wide vacancy rates are futile. Empty homes are a natural part of healthy housing markets, and for there not to be a shortage of homes, there must logically be a surplus of empty homes.

More homes for everyone makes all housing problems easier to solve. But Britain’s need for more empty homes is why when tackling the housing shortage policymakers cannot just think about “supply and demand” – they need to think about “surplus and shortage” too.