As the most used form of public transport across Britain, the significance of bus travel for the economic performance of UK cities should not be understated. Buses are clearly visible, politically salient and people across cities and towns feel invested in the quality and frequency of their services. However, several preventable roadblocks have arisen, and national policymakers must engage in the debate sooner rather than later and provide more funding to the industry.

Why are buses back in the news?

The Covid-19 Bus Services Support Grant (CBSSG) was introduced in March 2020, providing commercial bus operators in England outside London with £1.4 billion to alleviate the consequences of lost revenue due to reduced patronage. This was superseded by a lower level of financial subsidy (the “Bus Recovery Grant”), providing a further £226.5m from September 2021. This grant is due to taper off at the end of the financial year in two months’ time, with the assumption at the time of its introduction being that passenger numbers would recover to pre-Covid levels.

Nevertheless, the onset of the Omicron variant and the work from home guidance has seen the recovery of bus patronage stall at around 70% of pre-Covid levels (Figure 1), with the issue exacerbated by an unprecedented shortage of bus drivers due to Covid self-isolation and infection. Without additional grants and with little funding available from local government still affected by austerity, bus operators are now having to consider terminating vital services. Reports suggest that in places like the North East of England, services may be cut by between 10 and 17 per cent. 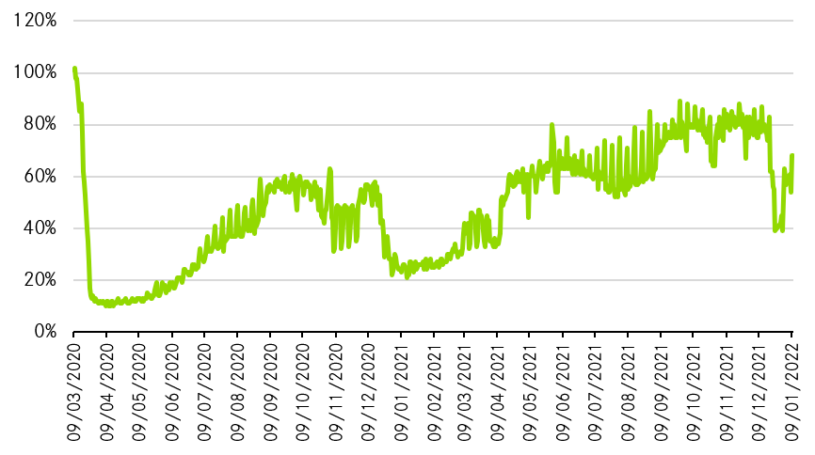 Source: Department for Transport (2021), Domestic transport use by mode: Great Britain since 1 March 2020

Note: Percentage of the equivalent day of the third week of January 2020

Separately, the Government’s Levelling Up White Paper discusses how buses are crucial to connecting people to jobs, education and wider opportunity and that £3 billion “has been allocated” to transforming buses. However, this is at odds with the recent news that this central government funding for local transport authorities’ bus provision has actually been halved. This is particularly disappointing after various senior politicians have explicitly expressed their support for the industry, and will further exacerbate the situation.

The Levelling Up White Paper identifies the need to close the UK’s productivity gap, implying that the economic underperformance of the UK’s largest cities and towns should be at the core of the Government’s policy agenda to alleviate the country’s geographical differences.Covid-19 has also inflicted the greatest economic damage on places like Hull, Blackpool and Birmingham which were already weak before its onset. Strong local bus networks will be at the core of both of these policy issues; good urban mobility, through a robust bus network, increases the number of workers who can access the places in which their jobs are located, particularly in city centres.

For example, buses will be an essential form of affordable travel to allow jobseekers to access opportunities; data from the Department for Transport’s National Travel Survey shows that in 2019, nearly 8% of all trips by those on lower incomes were by bus, compared to close to 4% for those on higher incomes. Young people, many of whom will not have access to a car, will need to be able to reach training at colleges, universities and other sites. Older people will need to travel to acquire new skillsets, with the Government promising funding that will allow retraining at any age. Similarly, high-skilled jobs that offer the highest wages and drive economic growth (and therefore also the Covid recovery) are located in dense concentrations in city centres. Buses are critical to providing these businesses with access to a wide labour pool.

In the short term, the Government should extend the provision of emergency funding as well as maintain, rather than cut, what was promised in last year’s national bus strategy

Last year, this government tried to show it believed in the importance of buses. The £3 billion national bus strategy, Bus Back Better, published in March 2021 acknowledged the role of local buses in improving social cohesion and avoiding a car-led pandemic recovery; more buses on our roads support the Government’s net zero agenda, where the modal shift from cars to electric and hydrogen buses maintains mobility but cuts the number of vehicle journeys and harmful emissions cars produce. Local authorities were also encouraged to publish Bus Service Improvement Plans which outline what can be done at a local level to make travelling by bus as attractive as possible.

However, reports that local transport authorities will now have only £1.4 billion to bid for from the original £3 billion is disappointing and will simply add to the uncertainty facing regions and bus operators. In the short term, government should draw up plans to at least safeguard the existing emergency funding for bus operators to make sure bus provision continues, until ridership levels stabilise and return to those from before the pandemic. Separately, the £1.2 billion announced by the Chancellor in the Autumn Budget for better bus services, infrastructure and fares outside London as part of Bus Back Better should also be fully deployed. This is of particular importance ahead of the next general election, where these tangible policy wins matter to voters.

Over the longer term, local leaders should be encouraged to fully franchise their bus networks

In addition to more funding, there is a strong case for local leaders taking full control their own city’s bus services. Today, many key decisions about bus provision are taken by private operators, and elected officials outside London have few powers to coordinate or make changes; the deregulation of local bus services in 1986 changed the focus from providing city-wide networks to running only services that could turn a profit.

London serves as a well-documented example of the city which has bucked the bus trend seen across the rest of England, and that is because of the franchised model. The capital’s mayors have used control of the capital’s bus network and the revenues raised to establish the most significant pro-bus policies in the country. More funding, more bus lanes and a congestion charge have supported more frequent and reliable buses, a 24-hour service, lower and more concessionary fares, cleaner vehicles and a new, integrated contactless ticketing system.

While an Enhanced Partnership approach, as promulgated by the Bus Back Better strategy, might seem the easier option as the next step towards reregulation, only franchising will allow mayors meaningful controls over cities’ bus networks. Without bus franchising, mayors cannot specify services to run where most needed to increase prosperity and encourage regeneration. Similarly, those mayors with the existing powers to franchise should do so imminently, rather than using the Enhanced Partnership approach as an intermediate step. Through this, mayors will be able to decide how best to deploy newer, greener bus models. The aim should also be to double bus patronage from pre-pandemic levels over the next decade, as happened in London once the service was regulated.

There is no time like the present for government to restate its commitment to buses. With the ongoing debate on the shortcomings of the Integrated Rail Plan (IRP) and the likelihood that most of its schemes will not materialise until the 2040s, alongside the discourse around how much investment in rail infrastructure really can “level up” the economy, buses are a comparatively quick-fix solution which should not be ignored by policymakers. 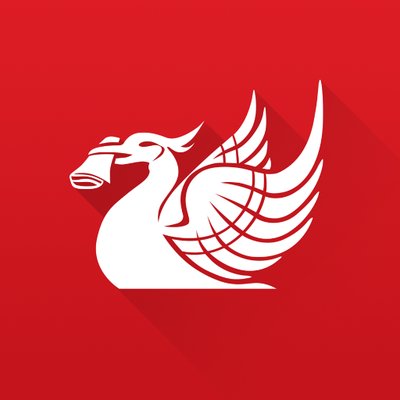 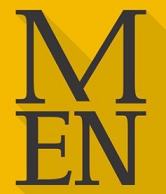 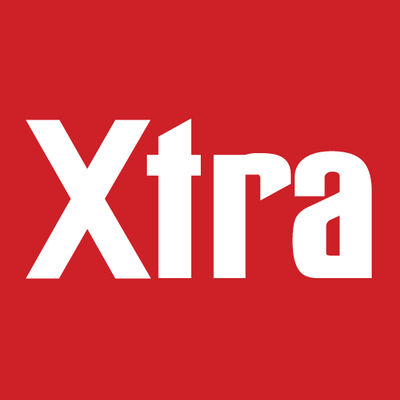 Last week, Centre for Cities hosted an event to discuss the next steps for improving the quality of bus services and their contribution to the economy, supported by Abellio.