The ONS released its first Census data results last month, starting with population estimates (which Centre for Cities analysed here). Alongside this, it also published data on the number of households in England and Wales, showing that they have increased by about 1.4 million since 2011.

Comparing these estimates to population growth rates and housebuilding trends at the local level shows one clear, unmistakable pattern: some parts of the UK are in dire need of new homes. Here’s why:

In many cities, the population grew more rapidly than households

Between 2011 and 2021, the population in England and Wales increased by 6.3 per cent. The number of households went up as well, but at a slightly lower pace (6.1 per cent). This may not sound like a significant mismatch, but this national figure is misleading as national markets are made up of dozens of local markets.

Looking at the subnational level tells a different story. In cities and large towns, the gap is much wider: the population grew by 6.5 per cent, against just 4.9 per cent for households.

Figure 1 shows how these dynamics play out across cities. In 34 of them (those on the right-hand side of the line), the population growth has outpaced the change in the number of households.

Figure 1: In the majority of cities, population growth outpaced the change in household numbers 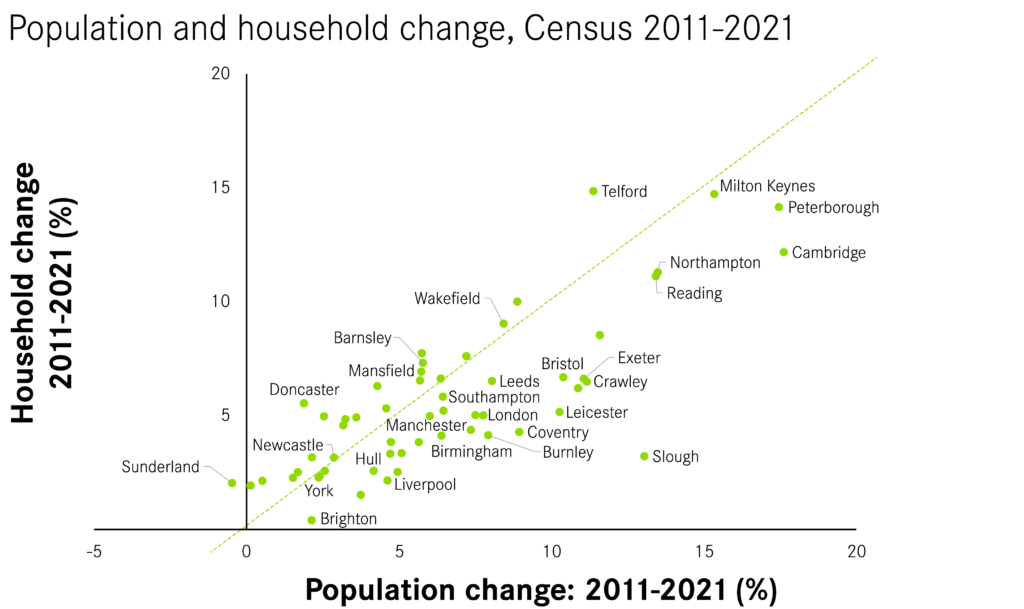 This is a sign that the average number of people living in a single household is increasing. As Table 1 shows, it is particularly striking in a number of southern cities. Of the ten cities where the average household size increased the most since 2011, seven are in the South. In Slough, for instance, the average household size went up by 10 per cent, followed by Oxford and Cambridge (seven per cent and five per cent, respectively). At the other end of the spectrum, in a number of northern cities like Doncaster and Sunderland, households actually got smaller.

Table 1: The gap between population and household growth is particularly wide in southern cities

Higher average household size could simply reflect that families got larger and people have had more children over that period of time. This may hold true in some places, but only marginally: the patterns above are very similar when looking solely at the working age population.

Rather, this gap is likely to be the symptom of a much more worrying issue, which is the rise of homesharing and, in some cases, overcrowding. This trend has been well documented in recent years, with more and more people living in Homes of Multiple Occupations (HMOs). Homesharing may well be a choice for some but it is also likely part of a larger problem related to the shortage of homes. The fact that it is particularly prominent in the most expensive parts of the country, where demand for housing is the highest, is no coincidence.

Household formation is contingent on the availability (and affordability) of housing. Parts of the UK are wracked by a systemic under-supply of homes compared to local demand. There are a total of 19 cities where housebuilding has failed to keep pace with population change over the past ten years. Again, the geography of this is very clear: these are either the UK’s largest cities (Manchester, Birmingham, Bristol, Leeds) or smaller cities in the Greater South East (Milton Keynes, Oxford, Reading). In these high-demand places, the housing shortage pushes prices and rents up, and many are forced to live in flat-shares or stay with their parents for longer.

Some have argued that household and population numbers have not met projections (which underpin local planning and housing needs estimates) to demonstrate that there is no housing shortage in the UK. However, failing to meet household numbers projections is a sign of unmet need, rather than excess supply. The reason why these potential households have been ‘lost’ is because housebuilding has failed to rise with local demand.

Making these cities more affordable will require building more homes – not just to meet current levels of demand but to create and stimulate new demand to live in them. This matters for their economies too, as housing growth plays a key role at attracting and growing a local workforce.

Previous Centre for Cities research has shown how this could happen, with estimates suggesting that between 1.7m and 2.1m could be built around stations, on less than two per cent of the Green Belt. To get there we will require comprehensive planning reforms, as the current planning system effectively caps the amount of homes that will be built in a city. A core part of that reform should involve moving away from the current case-by-case mechanism which rations the supply of land for development and disconnects the supply of new homes from local demand.

The current proposals in the Levelling up Bill are not quite the radical overhaul the planning system needs (namely, a shift towards a Japanese-style zoning system where development can proceed unless the council blocks it) but they will nevertheless make it easier to deliver more homes, if they pass into law.

Future of cities
What do the first Census 2021 results say about the state of urban Britain?

Coronavirus
Is it time to delay the Census?

We’re due to fill out our census forms in less than four weeks’ time, but the roadmap for lifting Covid-19 restrictions should trigger a delay.