There’s a great deal of discussion, particularly around the high street, concerning the importance of independent businesses. In this debate it seems that the demonisation of the chain store, particularly Tesco, wins the popularist vote. But this is short sighted. Branch businesses have an important role to play in our cities.

Our new report, Open for Business, sponsored by ICAEW, looks at the geography of branch businesses. It finds that Aberdeen has the most branch businesses in its economy – almost one in four of its businesses are a subsidiary of a company owned elsewhere in the UK or abroad. 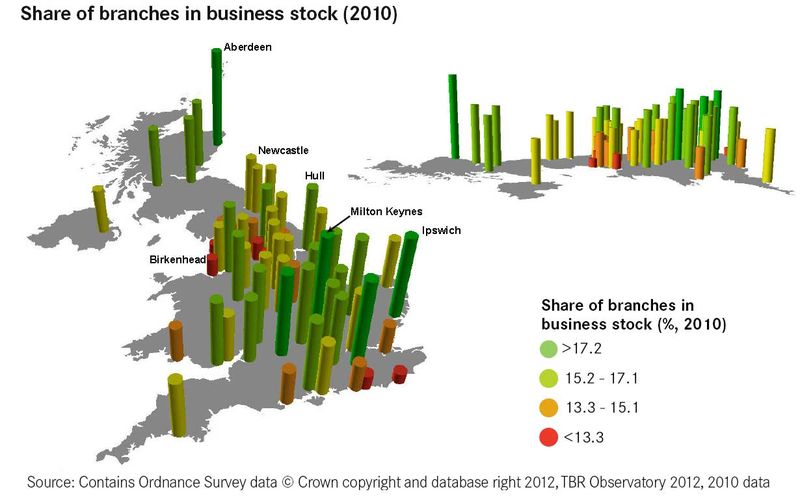 Meanwhile Southend is the UK’s most ‘independent’ city economy – nine of every ten businesses are independent. But far from being a strength, this could undermine its future economic growth. I’ll give you two reasons why this is the case.

Firstly, the number of branch businesses is likely to be an indication of the attractiveness of a city economy to outside businesses. When viewed like this it should come as no surprise to see that cities such as Milton Keynes and Reading are amongst some of our ‘least independent’ city economies – their strong economies are like honey pots for external investment.

Secondly, these businesses are likely to import innovations developed elsewhere into a city. Why is this important? Innovation is the driver of long run economic growth. And innovation isn’t just limited to iPod-like ‘eureka’ inventions in knowledge intensive activities. McKinsey found that retail was responsible for nearly a quarter of the increase in productivity in the US economy between 1995 and 1999.

But, as always when looking at cities, there are exceptions. Not all of the UK’s strongest economies also have a high share of branch businesses. Brighton, well known for the independent nature of its economy and shown to be a ‘buoyant’ city in our Private Sector Cities report, has the fifth lowest share of branch businesses out of all UK cities. But far from being a strength, the relatively closed nature of its economy should be somewhat of a worry. If cities are the fonts of ideas, the lack of exposure of the Brighton economy to influences from elsewhere could hinder its future growth prospects.

So what should cities do to encourage openness? Some have been very proactive in the past in directly marketing themselves to investors. While this is all well and good, what use will this be if the city has a problem with skills or is slow in processing planning applications? Addressing these weaknesses should be paramount in any efforts undertaken to attract business.

As well as tackling these weaknesses cities need to demonstrate that they are open for business. A key aim of any economic development strategy should be to work proactively with incoming businesses, making it easier to both locate and invest within a city.

So cities should look to do a further three things. Firstly each city should submit a list of the key assets that it has that can be used by UKTI to better inform the location decisions of potential investment from abroad. Secondly they should create a visible single point of contact for potential investors to communicate with. And finally they should look to make the planning system as flexible and expedient as possible to lower the costs of investing within the city.