There are many drivers of footfall, as illustrated in the figure below. Some of them, such as events, markets and festivals, increase footfall on a weekend, when people aren’t at work. Others, such as workers, increase footfall for five days out of seven, swelling the daytime population of city centres. In large cities, weekday daytime population increases by up to 89,000 people on average because of commuting. And in London it is 1.4 million. 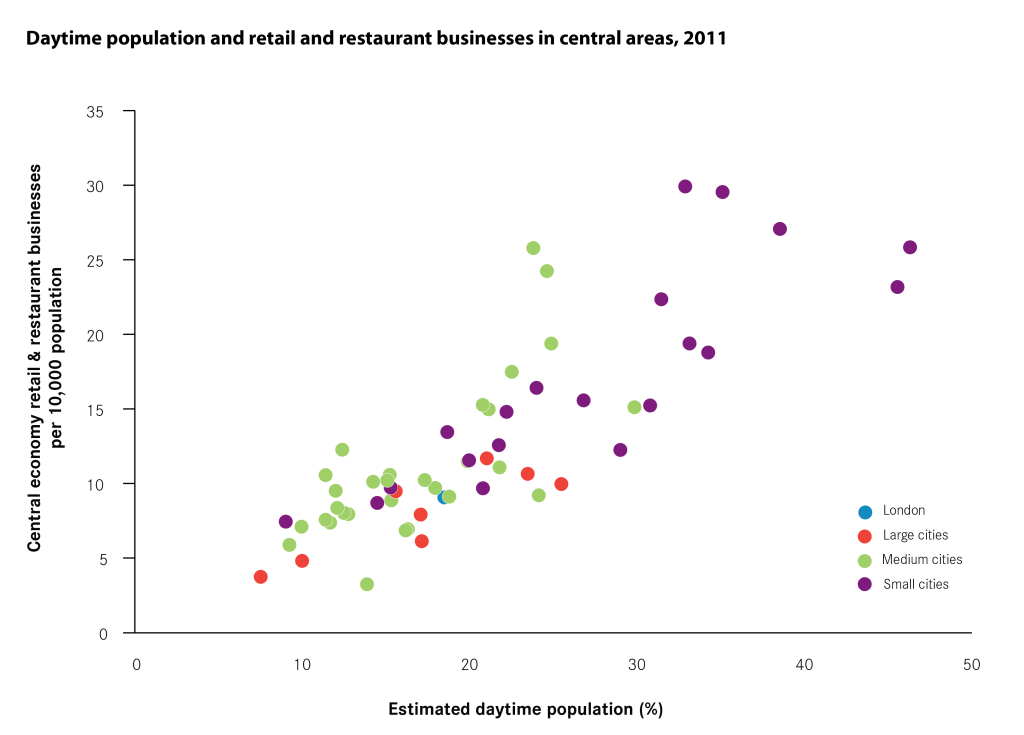 Why does this matter? Because the performance of our city centres varies massively from city to city. Large cities, on average, have seen their central economies play an ever larger role in their overall economies, acting as the engine room of job creation in recent years. But the opposite has occurred in medium and small cities – their city centres have lagged behind their wider economies, with out of town sites playing an increasingly larger role. In some cities, such as Sheffield and Northampton, their city centres have gone in to reverse, losing private sector jobs at a time when the economy as a whole has been creating net new private sector employment.

This means that an increasing number of people spend their weekdays commuting from the suburbs to out of town employment sites. As a result they have fewer reasons to visit a city centre during the week. And in turn this limits the market that High Street retailers can sell to, which impacts upon their profitability.

The retail debate is important but just part of a much bigger debate – there is a much more fundamental reason as to why these patterns of economic development matter. City centres are becoming increasingly important business locations. This is because for high skilled services businesses, trading in areas as law, finance and consulting, proximity is becoming increasing important. Being close to other businesses allows them to exchange information, which increases their productivity. It is for this reason that many businesses pay the higher rents of central London or central Birmingham, instead of a site on the M25 or M42, say.

If the UK continues to specialise in ‘knowledge intensive’ business services then city centres will become increasingly important to the performance of the national economy. This means that those cities that have strong central economies are in a good position to benefit from this growth. But it means that those reliant on the performance of their out of town economies are not, with implications for future high skilled job creation and their economic growth.

In our strongest city centres, focus should be on managing growth through better public transport, expedient planning and the introduction of congestion charging. In weaker performing cities it should look to address issues within the office markets within these places, which includes removing inappropriate stock as much as building new office space, improving transport infrastructure and considering business rate discounts. Cities do not operate as islands, so they should also look to improve transport links to the nearest large city.

The implementation of these recommendations should improve the functioning of our city centres, irrespective of their size. And if we can increase footfall to city centres, then retailers should be ready to benefit too.

The report is just one element of the research that we’re doing on the future of city centres. Over the coming weeks we’ll be publishing a series of blogs looking at different elements of this work, and how it plays out in different cities.  The next  in the series looks at city centres and the post industrial economy.