One of the starkest differences for any British tourist when visiting a European city must surely be the existing public transport networks. Berlin, Brussels and Lyon for example all have trams and metro systems, in contrast to cities like Bristol and Leeds. But what impact does this have on their economies and what does it mean for the levelling up agenda? Centre for Cities’ latest research conducts the first comprehensive comparison between transport networks of large British cities and their Western European peers to find out.

Most big British cities are much smaller what their populations suggest

This comparison shows that large British cities are in effect much smaller than their European counterparts. On average, 40 per cent of people living in large British cities can get into the city centre in 30 minutes by public transport, which is significantly below the 67 per cent in comparable cities such as Copenhagen, Munich and Marseille.

Poor public transport accessibility in big cities hinders their economic performance because it reduces the size of their labour market. Agglomeration tells us that as cities become larger the benefits they offer to businesses become more pronounced. But this analysis suggests large UK cities aren’t as large as they seem, in turn limiting the benefits they offer. Ballpark calculations suggest that the effective shrinking of these large cities costs the UK economy £23.1 billion each year.

So what causes this effective shrinking?

Perhaps somewhat surprisingly, these patterns cannot be solely explained by the lack of public transport infrastructure. As shown in Figure 1, in five out of the nine biggest cities in Britain (excluding London), the total area covered by the public transport network in 30 minutes is comparable to their European peers. So despite the trams that run along the streets of many large Western European cities, this greater transport infrastructure doesn’t necessarily mean greater reach of the network within a 30 minute period.

Figure 1: The size of the public transport network is not a problem in all large British cities

Source: Traveltime; ONS; Eurostat; Centre for Cities’ calculations. Accessibility above 100 per cent does not necessarily mean that all residents are included as transport network may include residents from different towns and cities.

The main reason why public transport in British cities generally underperforms their European peers, even where the existing infrastructure covers a large area, is the lack of people living in areas with good public transport networks.

Unlike large Western European cities, population density in British cities does not increase with their size. Manchester is not denser than Liverpool or Newcastle in the way that Lyon is denser than Toulouse or Lille, as Figure 2 suggests.

Figure 2: The larger the city, the bigger the density problem.

The example of Manchester and Milan shows the implications of this. Despite Manchester and Milan having similar-sized areas covered by public transport (that can reach the city centre in 30 minutes), Milan has 630,000 more residents that live in this catchment than Manchester. This is the result of an urban form dominated by low-rise, terraced and semi-detached housing in Manchester (and most British cities), compared to mid-rise apartments in Milan and other Western European cities.

Figure 3: Milan’s 30 minute area has more people living in it than Manchester’s, despite being a similar size

Without transforming the urban form of British cities – by having more residents living next to good transport networks – infrastructure investments alone are unlikely to solve the existing accessibility issues.

In Leeds, less than four in ten people can enter the city centre in 30 minutes or less on public transport; while in similarly-sized Marseille, almost nine in ten people can. That said, Figure 4 suggests that if Leeds had a similar-sized public transport network to Marseille, the current accessibility gap between the two cities would only close by half. For Leeds to match Marseille’s levels of accessibility, it would need to match is levels of density too.

Figure 4: The gap between Leeds and Marseille will not be fully closed simply by increasing the size of the public transport network

Last month, the Chancellor announced around £6.9 billion over five years to deliver London-style public transport integrated systems, mostly targeting eight city regions (£5.7 billion). This is very welcome. The analysis above shows though that these investments alone will not solve the existing connectivity problems.

To make the most of these investments, they should be done in conjunction with building more homes around the stops and stations that the investment creates. Also announced in the Budget was £18 billion for houses on brownfield land. These two announcements should be tied together. And local authorities should use existing powers to use Local Development Orders to plan for mid-rise housing near existing and new public transport. Under this mechanism, councils can set density and height criteria, which would allow them to replicate some of the internationally praised interventions from cities like Lille and Bordeaux.

The analysis above also gives further weight as to why we need more comprehensive planning reform too. If we are to see a greater shift towards public transport usage in light of the UK’s net zero targets, we need to create places that reduce dependency on cars. The current system does not easily facilitate the increase in homes within the existing urban footprint of our cities. This needs to change if we are to get more people out of their cars and help address the productivity problems Britain’s largest cities face.

Measuring up: Comparing public transport in the UK and Europe’s biggest cities 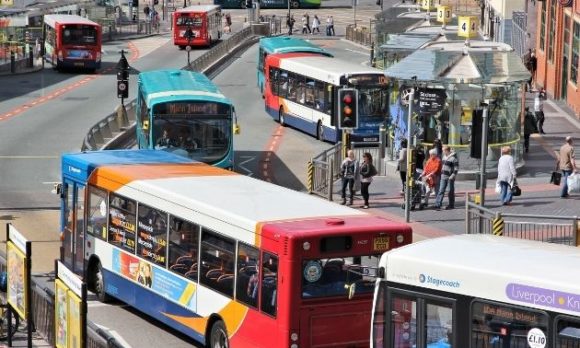