Housing shortages make boom-bust cycles, real estate bubbles, and speculation worse.
Is it a problem that houses are assets rather than homes? It has become common in recent years to identify the ‘financialisation’ and ‘commodification’ of housing as the cause of our current woes. On the face of it, this argument is appealing. Looser monetary policy and financial regulation have no doubt increased demand for real estate as an investment temporarily, pushing up prices and housing costs.

Centre for Cities has previously explored one of the major flaws with the financialisation argument. Namely, it cannot explain why housing costs vary so much across the country when the UK is a single market for credit. The answer to this puzzle is that permanent increases in housing costs are linked to shortages of new homes in growing cities.

However, our most recent report, Capital Cities, shows how homeowners in these expensive cities are seeing the value of their home as an asset rapidly increase. This is widening inequalities between these wealthy homeowners on the one hand and private renters and homeowners in cities with weaker economies who see no price growth on the other. Does this mean if we clamped down on speculation in these cities, or if the Bank of England adopted a house price growth target as some commentators in Labour have suggested, that we could prevent these homes from being treated as an asset and reduce inequality?

Unfortunately, it would not. Finance does increase demand in expensive cities, but it struggles to increase supply. This mismatch is at the heart of finance’s problems with housing. Cheaper credit pushes up house prices in cities in the short term but is unable to boost these cities’ supply of homes enough to stabilise house prices over the longer term.

Finance provides liquidity, which in real estate, allows residents to buy homes and firms to construct them. Across cities, we would, therefore, expect to see lending increase the most in the places with successful economies as they have the highest demand for housing. 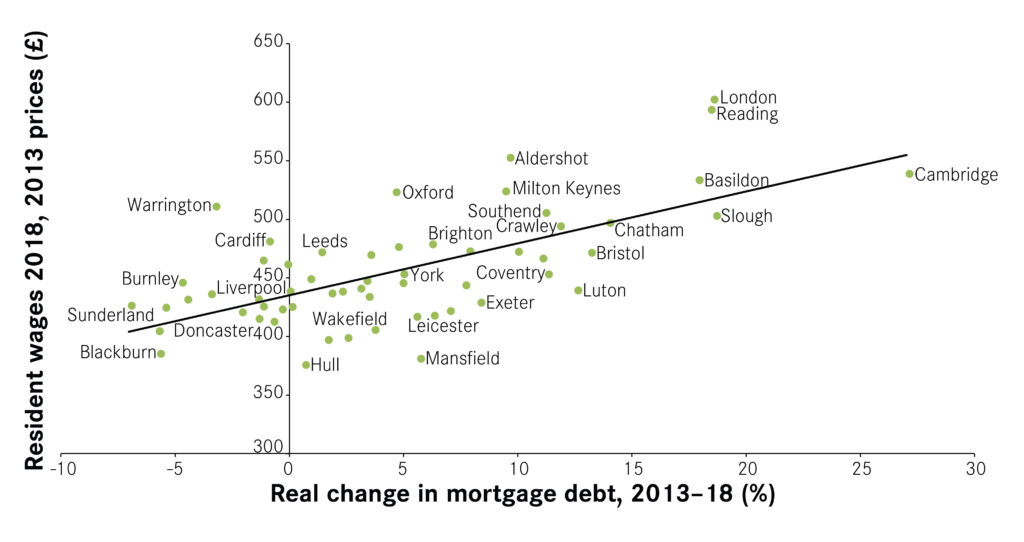 Real net mortgage lending has increased the most from 2013 to 2018 in cities that have high resident wages, and therefore higher demand for housing

Credit is flowing to cities where housing is in high demand to give housebuyers the credit they need to buy homes, contributing to rising prices in these expensive cities. But this is finance working as it should, allocating capital to people, places, and uses to where it is in highest demand and can be used most efficiently.

While demand for housing and finance are associated with economic geography, the supply of new homes is not. It might sound intuitive to build the most homes in the most expensive cities with the highest wages, but that is not what happens in the UK. Many unaffordable cities like Brighton and Oxford are building far fewer homes than cheaper cities such as Wakefield or Hull. This is due to how our planning system decouples housing supply from demand by rationing land for new homes and controlling development. 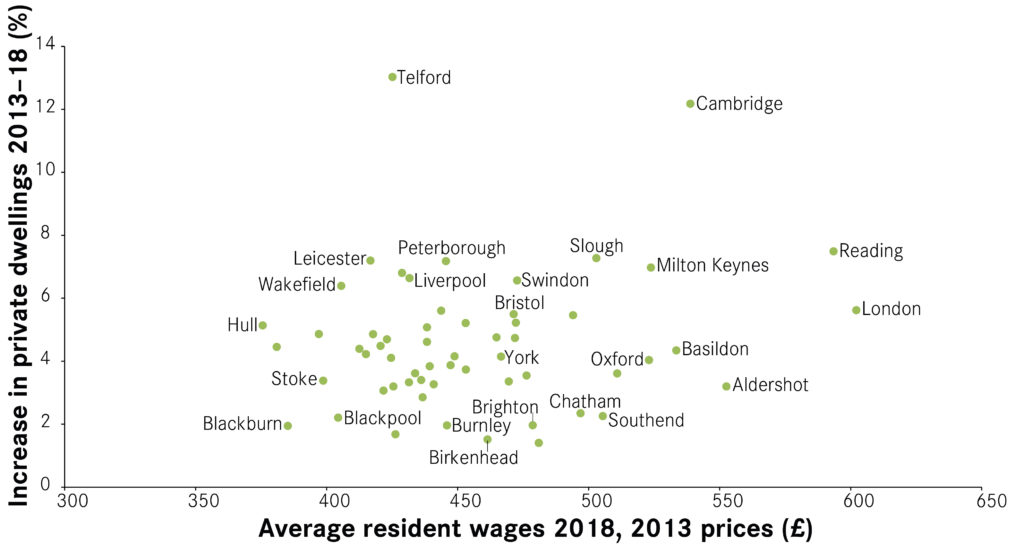 As a result, cheaper credit and looser monetary policy affect the demand for and supply of housing differently. Finance is unable to substantially increase supply in high-demand cities due to the planning system’s restrictions on development.

Shortages are the problem, not finance

Financialisation of housing does, therefore, exist on the demand-side, as it has always done. Cheaper lending makes it easier for homeowners and investors to buy existing property, boosting demand and causing prices to rise in expensive cities. But the financialisation of supply is limited because the planning system does not respond to price signals. As quantities cannot increase as much as they should, prices do so instead. This means house prices are linked to lending conditions in the short-run, but that in the long-run, the asset value of houses belonging to wealthy homeowners in expensive cities steadily grows. In other words, it’s not finance which is causing the ‘commodification’ of homes – it’s the shortage of housing.

Another way of thinking about this is in terms of real estate bubbles. So long as we have had finance, we have had asset bubbles. But housing bubbles are in theory rather more useful than bubbles in Beanie Babies. As builders try to cash in on cheaper credit and rising house prices, a flurry of investment in real estate should result in a permanent increase in the number of houses where demand is highest. When enough homes are built the bubble will pop and the price of housing will fall, but the new homes will remain.

However, we don’t see this in the UK. We have real estate bubbles as investors pile into property, but these bubbles don’t always result in lots more houses. It is the planning system’s restrictions on development which make homes in certain cities artificially scarce and transform them into attractive assets for long-term investments. Finance, therefore, pushes prices up in the short run, but cannot decrease them in the long run.

Reducing inequality requires reform to supply and to how households build wealth
The result is that we have the all the volatility and inequality of capitalism without its productive potential. Homeowners in expensive cities are gifted large increases in wealth by these shortages; changes in lending conditions have dramatic impacts on house prices; but unlike every other part of the economy we struggle to produce enough of what people want – more homes in expensive cities.

Solving this requires reform in three areas. First, we need to release more land for development around expensive cities to alleviate their shortages of housing, including through reform of the green belt. On green belt around the 10 least affordable cities in England and Wales, within 25 minutes’ walk of train stations, there is room for 1.4 million houses. National government should also require the rest of the green belt to be graded by quality to better protect high-quality countryside while ensuring land more suitable for development is gradually released for new homes.

Second, we need to reconnect housing supply with local demand through planning reform. In principle, once a local plan is in place, the planning system should allow people to build new homes unless the local authority explicitly says ‘no’, rather than forbidding any development until the local authority grants permission.

Third, we should think about how households build wealth. If we make housing inexpensive due to responsive supply, households across the country will need a new asset class to reliably save in. This might be pensions or equities, which have been much more effective instruments for building wealth in the US than real estate. Or it might require the creation of entirely new safe assets, such as Odendahl and Tooze’s Eurobonds idea. Making this shift in saving behaviour may require quiet encouragement and policy changes from Government.

There may be scope to reform finance to tackle issues that go beyond the scope of this blog and the remit of Centre for Cities. But our housing shortages can only be solved with reforms to housing policy, not by finance alone.