When categorising cities according to wages and welfare for this year’s Cities Outlook, Southend was classified as Britain’s only high wage and high welfare economy. So why is this? 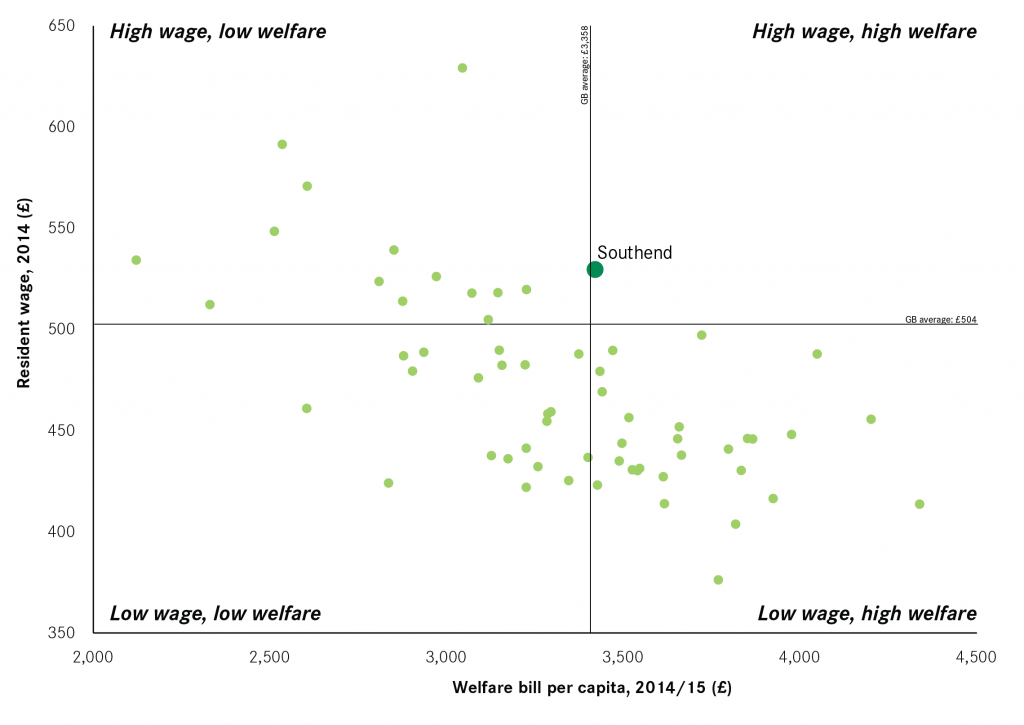 First off, let’s have a look at wages. Unlike the majority of cities in Britain, the wages of residents in Southend are higher than those of its workers. This means that, in net terms, the residents of Southend in 2014 brought £33 million back to the city from their jobs elsewhere. And the majority of this is likely to come from London – one in five of Southend’s working residents commutes into London each day.

In terms of welfare, it’s important to note firstly that welfare spend per resident in the city only just creeps above the national average – spending in Southend was around £60 higher per resident than the British average of £3,360. But one of the factors that pushes Southend above the national average is its spend on old age benefits, which accounted for 51 per cent of all welfare spending in Southend in 2014/15, compared to the national average of 45 per cent. This reflects the older demographic of the city, which has the 4th highest share of people aged over 65 of all UK cities.

All this means that it is likely to be Southend’s attractiveness as a place to live that makes it Britain’s only high wage, high welfare economy – London commuters want to live there, as do older people.

While this is positive, it also presents the city with three main challenges as well.

The first is to address housing affordability. Southend is the 11th least affordable city in Britain, and to avoid making it become increasingly unaffordable it will need to build more houses to meet high demand.

The second is to deal with the implications of an older population, and the increased demand on services this creates at a time of public sector cuts. Falling budgets and ageing populations will put increasing pressures on all cities, but this will be greatest in cities such as Bournemouth and Southend that have the highest proportions of residents over the age of 65. The way that public services are organised and delivered will have to change to deal with this challenge.

The third is to deal with the implications resulting from its weaker economy. While resident wages are higher than the UK average, wages earned in jobs located in Southend were the second lowest of all cities in 2015. The lower levels of opportunity within the city are likely to be the main factor affecting why there is so much out commuting from Southend. The question policy-makers face is this: should they prioritise supporting the city’s economy, or should they prioritise making Southend an ever more attractive place to live?