A question that Centre for Cities has been asked perhaps more than any other over the last ten months has been ‘does Covid signal the death of the city?’ Many have speculated on how home working will free people from the office, and the city.

While there have been numerous stories about how home searches in Devonian towns have gone through the roof, we should be cautious about rushing to conclusions.

History gives us insight on this. Cities have existed for 6,000 years, and throughout that time have always been centres of disease as well as prosperity. Density has its downsides as well as its upsides. And yet we have continued to be drawn to cities.

More recent trends are also revealing. High-skilled businesses have increasingly clustered in successful city centres in the UK in recent decades, despite the higher costs of doing so. This shows the importance of face-to-face interaction for such companies – those chance meetings, those sparks of inspiration and the process of learning that happens by bringing people together. Given that the UK economy is likely to continue to specialise in more ‘knowledge-based’ activities in the coming decades, face-to-face interaction is likely to become ever more important.

Counter arguments could fairly point out though that the UK hasn’t dealt with anything like Covid in living memory, and that Covid has finally forced us to get to grips with digital technologies that support home working.

While this is true of the UK, it is not true of cities in the East Asia. Since the turn of the century they have had to contend with a number of epidemics, such as SARS, bird flu and avian flu. And yet in every country in South East Asia, the share of population living in urban areas is higher in 2020 than it was in 2000. The chart below shows how this has changed for many of them. 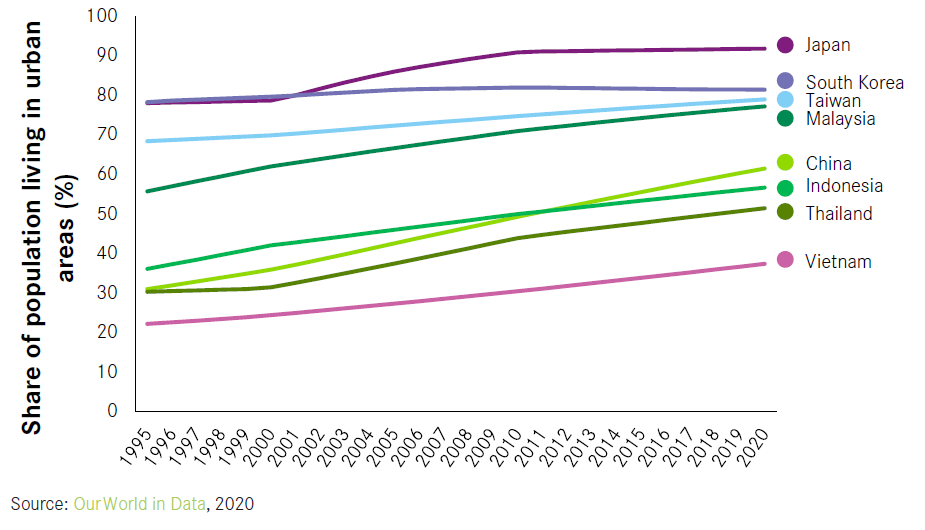 The populations of come cities have exploded during that time. For example, Guangzhou, which was directly affected by SARS, saw its population almost double to 13.3 million between 2000 and 2020, while neighbouring Shenzhen also almost doubled to 12.4 million.

It’s not clear what will happen post-Covid – only time will tell. But recent and not so recent history suggests that we should expect many more things to stay the same than to change.