What springs to mind when you think of successful cities from across the last century? Most likely London; Cambridge, too, and Manchester. Crawley and Peterborough might be a bit further down the list. But over the last century, these two cities have seen the fastest growth in jobs in the UK.

This is interesting to consider, especially because they have followed similar pathways over the last century. Both are well connected to London, by road and by rail. And in 1911, both were small cities, with similar economies – most jobs were in low knowledge private services, particularly in domestic service, but Crawley and Peterborough also both had a comparatively high proportion of people employed in knowledge intensive business services (KIBS) at this time.

During the last century, both cities were also designated as new towns. Announced in 1946, the first new towns were a response to a demand for housing in London brought about by urban bomb damage. Introduced alongside London’s green belt, the first wave, which included Crawley as well as 10 others, were primarily around London, and sought to house a growing population while preventing the sprawl of the capital. They were low-density, with open space, fresh air, and good rail links, as this film from 1948 illustrates. Another two waves during the 1960s provided a further 10 new towns, including Peterborough, which was designated in 1967.

As part of this status, Development Corporations were established in both Crawley and Peterborough, which were tasked with the responsibility of designing, building and administering growth areas. They were required to provide housing and infrastructure to support populations of 70,000 in Peterborough and 50,000 in Crawley. And as new homes came to completion, significant population growth was experienced in both cities – particularly in Crawley, as the chart below shows. 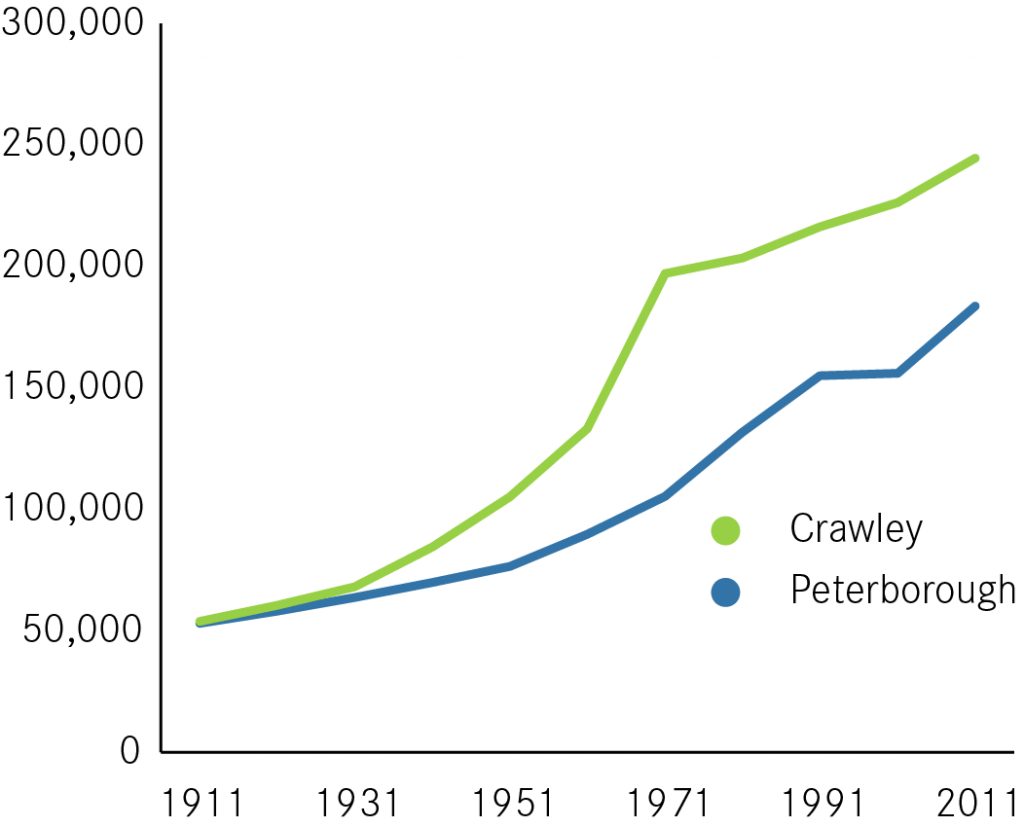 The investment also had a positive effect on businesses, and both cities experienced jobs growth in these decades after the new towns were designated. The data we have available for Crawley’s jobs growth throughout the century allows us to plot this change, which is shown below according to a 1911 index. While England and Wales saw a decline in jobs between 1951 and 1981, primarily due to the decline of manufacturing, Crawley experienced phenomenal growth. In the thirty years after Crawley’s designation as a new town, jobs nearly quadrupled in the city. Today, Crawley employs 150,000 people, and with a strong insurance and finance industry, as well as a number of businesses in science and technology, the economy is knowledge-heavy; 16 per cent of jobs are in KIBS.

The new towns status has arguably been a factor in Crawley’s jobs growth, although it’s not the whole story. Gatwick Airport, which opened in 1958, today provides around 21,000 jobs near the city. And commuting patterns have been a factor; the city’s close proximity to London in particular, but also other strong economies such as Aldershot, are likely to have been factors in the growth of its knowledge economy.

Peterborough today, however, looks slightly different. While it is true that there has been oustanding jobs growth over the last century in the city – the second fastest nationally with five times as many jobs as in 1911 – Peterborough’s economy does not have the same knowledge base that we see in Crawley. While there has been some growth in KIBS, which account for 13 per cent of all jobs, Peterborough continues to see investment in lower knowledge industries, such as distribution and warehousing. In A Century of Cities, Peterborough sits on the borderline between a “replicator” and “reinventor” economy – which means that it hasn’t kept up with some of the more successful cities in creating jobs in KIBS. Its location – further from London than Crawley, and more tied into the economy of the East Midlands than that of greater London – may have had an effect on land prices, which is a key reason why Peterborough has been attractive to low-knowledge industries rather than those that benefit from proximity to knowledge. In particular, the recent £140 million investment in the Gateway Peterborough warehouse and distribution park on the outskirts of the city is likely to reinforce the replication, rather than the reinvention, of the city’s economy.

Despite their similar pathways, the challenges that Crawley and Peterborough face now are very different. Crawley’s future growth is most likely to be constrained by a product of its own success – its housing affordability. As we showed last year, Crawley now has the sixth least affordable housing in the UK, with average house prices 10.6 times that of average wages. If it is to continue to attract skilled workers, Crawley needs to be looking to address its affordability crisis by building new homes. The future growth of Peterborough, meanwhile, is unlikely to hinge on its housing – housing costs in the city are among the more affordable nationally. Rather, the city’s future will depend on its ability to reinvent its economy, through investment and support in its city centre and in the skills that can support high-knowledge business growth and, ultimately, sustainable economic prosperity.