London’s house prices have been growing sharply in the last two decades, having negative effects in terms of housing affordability. This reduces real earnings of Londoners, adversely impacting the UK economy as a whole.

Evidence from Paris, the only comparable megacity in Western Europe, shows that house price inflation can be mitigated by expanding the housing supply. This will require bold policies around planning.

After 2007, London’s house price inflation was significantly higher than Paris

To better understand the drivers behind London’s housing crisis, Centre for Cities has compared the housing market performance of London with Paris over a period of two decades.

Figure 1 shows that between 2000 and 2007, house prices more than doubled in both cities. That said, they started diverging after the financial crisis. After 2007, house prices in Metro Paris (Île-de-France) grew by 33 per cent, compared with 68 per cent in Greater London.

Figure 1: House prices in London have skyrocketed in the last decades 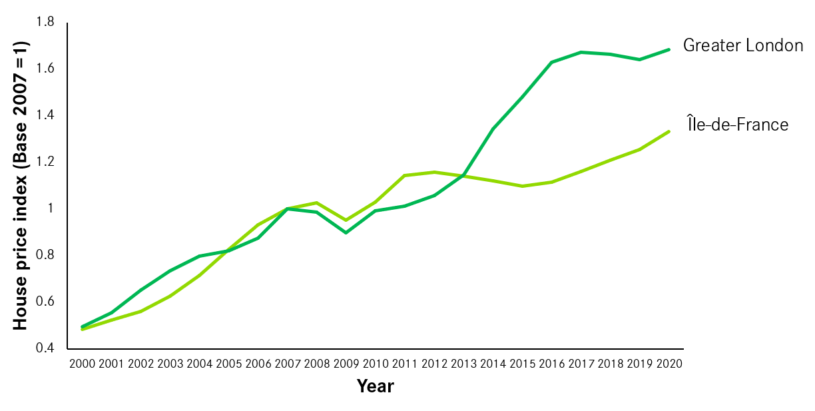 This observed divergence happened in a period where both megacities faced similar economic shocks and policy responses: they both suffered a contraction in 2008-2009; followed by a sharp reduction of interest rates and the introduction of other unconventional monetary policies.

At first sight, both cities experienced comparable economic growth over the period 2007-2018. But, economic growth had different drivers across these cities, which have implications for the housing market.

As shown in Figure 2, London’s economy grew by 22 per cent between 2007-2018, slightly above Paris (19 per cent). However, London’s economy was mostly driven by employment growth (vis-à-vis productivity-driven growth in Paris), which naturally linked with overall population growth. Consequently, this creates additional competition for existing space and causes inflation in the existing housing stock, unless it is allowed to expand.

This is particularly problematic in an environment where the supply of housing is not able to adjust easily, which is the case in London where the current planning system rations the supply of land for development and new homes. 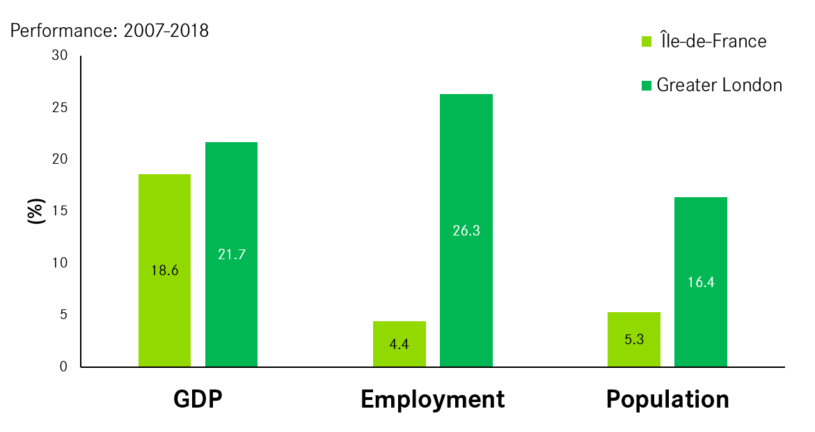 The existing data on housing starts suggests that the restricted supply of homes in London – combined with a stronger population and employment growth – is contributing to higher levels of house price inflation when compared to Paris.

These differences can be partially explained by the existing planning systems. France’s zone-based system, by being more rules-based than Britain’s, makes new housing easier. Moreover, since the financial crisis, successive governments have recognised the cost of housing shortages in Paris for the national economy. In 2010, housing targets increased substantially in Metro Paris (70,000 dwellings a year), including developments around new public transit stations; while in 2014 minimum space standards were eliminated in certain local zoning codes.

Housing starts figures do not represent the overall housing supply as they do not include conversions. However, the number of additional net dwellings in London remained below Parisian house starts, suggesting that house supply is much more constrained in the British capital.

In order to tackle the existing housing crisis, London needs to significantly increase its number of homes as Paris has done in recent years. To do this, the Government should continue the planning reform process and shift away from the current discretionary system towards a rules-based flexible zoning system; the current French planning system is more rules-based than the UK. A flexible zoning system would reduce uncertainty for developers and reconnect the supply of housing to demand in the UK.

Additionally, at the local level, the Mayor of London should launch a strategic review of the green belt and release parts of it around railway stations for new homes. Centre for Cities estimates show that 891,000-1,115,000 new homes could be built within 45 minutes of London’s city centre.

Making London more affordable should be seen as a national challenge and a part of the levelling up policy mix. Increasing real earnings of Londoners, by reducing housing costs, would boost demand for goods produced elsewhere in the country and generate additional tax revenue to be distributed.

Note: This blog uses the OECD data of the regions (NUTS 3) that include Paris (Île-de-France) and London (Greater London). This does not exactly match the PUA definition of London.