A key message from this year’s Cities Outlook is that our largest are punching below their weight. But this isn’t just an issue concerning our largest cities, it’s a wider problem across UK cities. And this is bad news for national economic policymakers.

Excluding London, the table below shows that Bristol is the only large city to consistently outperform the UK average on a range of indicators. 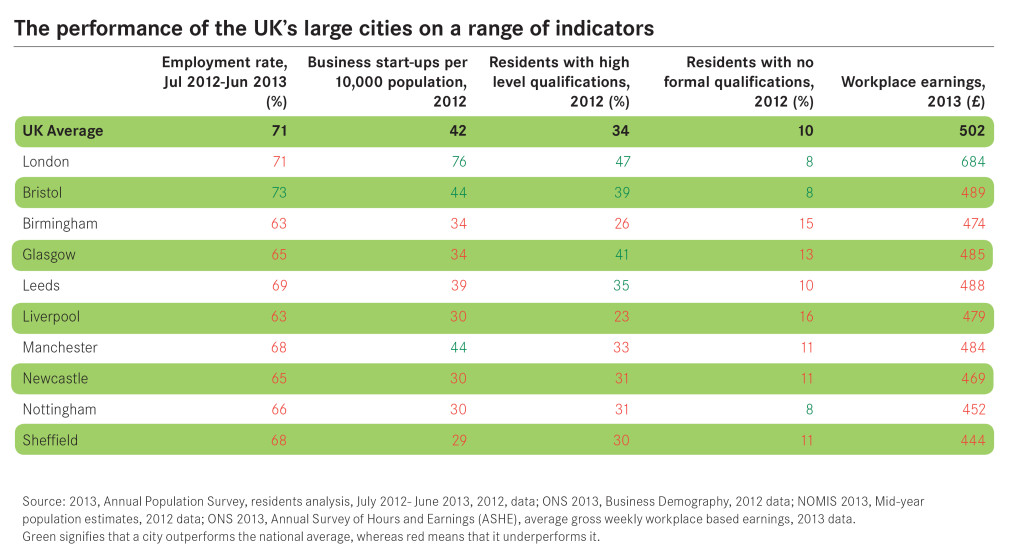 Many other cities don’t realise their potential either. Of all of the cities that we look at (64, where data for Belfast is available), just:

There are a number of cities that outperform the national average on each indicator. Reading, Edinburgh, Aberdeen, Cambridge and Aldershot pull up the performance of the national economy as a whole on each of the indicators presented above. And other cities, such as Milton Keynes and Warrington, underperform the UK in just one of the five measures.

But a city underperforming the national average should be an exception rather than a rule. The benefits of density – be they the sharing of amenities such as transport and broadband, to the sharing of information and ideas – should make cities more productive than their non-city counterparts. Anyone in doubt on this should read Ed Glaeser’s excellent book Triumph of the City.

That isn’t seen in practice in far too many of our cities. While many play an important role in their regional context, they do not make the contribution they could be making to the national economy.

And this should be very troubling for national economic policymakers. As in other countries around the world, our urban economies should be driving the national economy forward. The failure of a large number to do so means that the overall size of UK plc is smaller than what it should be.

The average urban worker contributes 15 per cent more than their non-urban counterpart. The core cities and surrounding areas plus London contribute over half of England’s GVA when they’re under performing. Imagine what these workers and these cities could do if they could make the most of their potential.

The Centre for Cities is convening a new campaign to raise cities up the political agenda ahead of the 2015 General Election. Visit www.thinkcities.org.uk to find out more.