Despite cross-party support for retaining the £20 uplift in Universal Credit, the Government looks set to scrap it from September, at an annual loss of around £1,000 per claimant. But how will this play out across the country?

Cities and large towns will be slightly more impacted than the rest of Britain, with an estimated 16.1 per cent of working age people claiming UC in the former compared to 14.7 per cent in the latter.

As ever though this masks much variation. Blackpool is the city or large town that will be most affected. An estimated 22 per cent of working age people claim the benefit. But a North-South split isn’t evident – Peterborough is in second place, while Basildon, Crawley and Luton also make the top 10, likely reflective of how these places have been affected by the pandemic. In contrast, Cambridge is likely to be the place lest affected.

The pandemic has affected poorer neighbourhoods disproportionately, and this means economic recovery will be unevenly spread

The Government’s reason for not extending the uplift is that it will no longer be needed as the economy opens up. But Centre for Cities work on debt before and during the pandemic calls this into question.

While much recent discussion has been about how the pandemic has forced people to save by restricting what they can spend their money on, this forced saving has mainly happened amongst richer households. Poorer households have both seen their spending fall less since the start of the pandemic (for every £1 decrease in less affluent areas, there has been a £12 cut in richer ones) and are more likely to have seen their incomes drop. And while these patterns hold across the country, the greater number of richer people in cities in the Greater South East mean that forced saving has mainly been something that has happened in this part of the country.

In those areas where forced saving has occurred, the Government may be right – the opening up of the economy and the pent up demand in these parts of the country may mean that the employment chances of the people currently claiming Universal Credit recover quickly. But in parts of the country where this forced saving is much less likely to have occurred, this is less clear.

That’s because there’s a strong negative relationship between Universal Credit claimants and forced saving. The chart below uses Centre for Cities’ estimates on the share of neighbourhoods in a city that are likely to have saved money during the pandemic against the share of working people claiming Universal Credit. If the removal of restrictions leads to increased spending, this will be good news for the claimants of Cambridge. It may bring some relief to the high shares of claimants in Peterborough. But it is much less likely to hold up in places like Slough and Hull.

Figure 1: Places that are likely to have saved money during the pandemic are not those with the highest share of people claiming Universal Credit 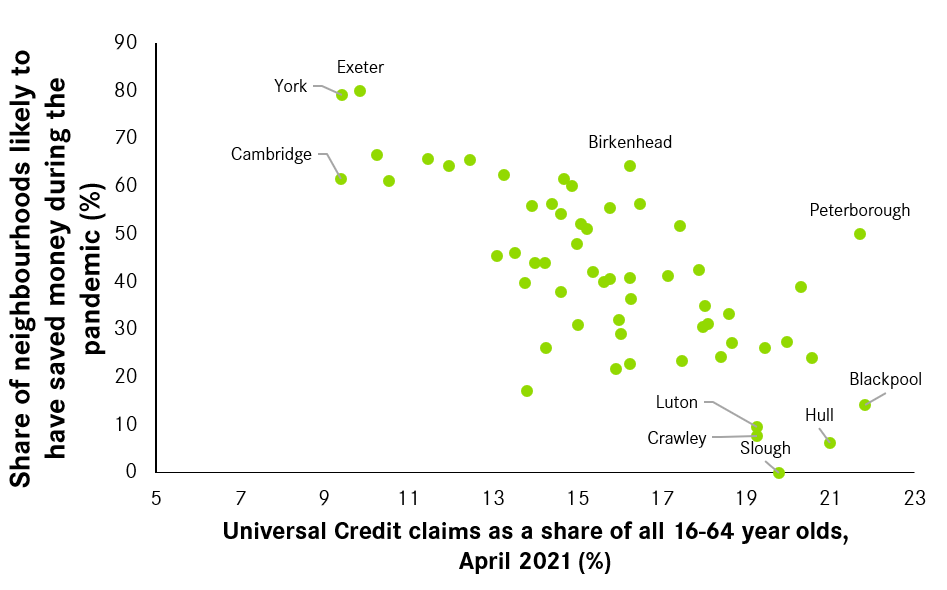 Different places face different challenges, so the Government should extend the uplift of Universal Credit until the recovery has taken hold

The challenges that Hull and Slough in themselves face is very different. Hull went into the pandemic in a weak position, with high shares of claimants and high levels of debt relative to incomes. While it has been less hard hit by the downturn than many other places, the lack of financial cushion before the squeeze is likely to have pushed people further into debt. Even if Hull recovers back to its position in February 2020, long term policy support will be needed to meet the Government’s ambition of getting people into better-paid work as a replacement to the Universal Credit uplift.

On average, the residents of Slough entered the downturn in a much less precarious position. But the impact of Covid-19 on international travel will mean that there’s unlikely to be a great spring back for its residents either. The removal of the uplift plus the ending of furlough will likely act as a double whammy for the people affected and for the Slough economy.

Given this, the Government should reconsider and at least extend the uplift of Universal Credit until the recovery has taken hold. But given the lack of generosity of the welfare system compared to other European countries, it should go further and make the uplift permanent.

The levelling up agenda has so far been about giving some lucky winners rewards like levelling up fund monies or freeports, while simultaneously Universal Credit is being reduced and day to day spending on public services is being squeezed even further after a decade of austerity. The Government has been very good at coining slogans like levelling up and build back better. It now needs policies that match that rhetoric.