A year on since the Coronavirus Job Retention Scheme was first introduced to protect jobs during the pandemic, approximately 4.5 million workers – one in seven of those eligible for the scheme – are currently still reliant on it.

Places reliant on tourism and travel have been hardest hit

While a baseline number of jobs has been affected in every place, there continue to be wide geographical differences in the take-up of the scheme, with places whose economy is most reliant on airports and tourism hardest hit (see Figure 1). At the extremes, as of the end of February, the take-up rate for the scheme in Crawley – the place most reliant on furlough – was almost double the take-up rate in Barnsley – the place least reliant on it. And other places currently heavily reliant on the scheme include coastal places like Blackpool and Brighton, airport towns like Slough and Luton and tourism hotspots such as London, York and Edinburgh.

One year on: what has been the impact of the pandemic on different parts of the country? 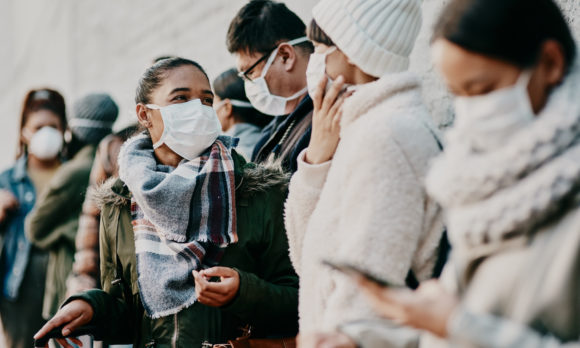 Retail and accomodation are the sectors most impacted by furlough

When looking at the composition of jobs currently on furlough, retail and accommodation are the two most popular sectors in every large city and town. Thanks to the latest data released by HM Revenue & Customs, we now know that on average, 42 per cent of all furlough claims in urban Britain were in these two sectors and, at the extreme, over one in two jobs furloughed in York and Blackpool fall within this category.

This is a direct effect of the Government’s restrictions and per se is not reflective of any long-term damage to the economy of these places: once pubs, cafes and hairdressers will reopen the number of people reliant on the furlough scheme in these sectors will naturally decrease as people will return to their high-streets.

However, what the sectoral data also shows is that, behind these two large sectors, there is great variation in the make-up of furlough claims across the country, with some places seeing more of their jobs in ‘exporting’ sectors (i.e. those that sell beyond a local market) being reliant on the scheme. Looking at the data this way shows that in Crawley, Slough and Leicester furlough claims in exporting jobs account for a larger share of the overall eligible employments for the scheme, while in contrast fewer exporting jobs were affected in Plymouth, Cambridge and Oxford (see Figure 2).

Some places will find it harder to recover than others

These differences matter because of the central role these businesses play in creating local economic growth. These sectors are the ones that bring money in to an economy and drive productivity growth. High furlough rates are more likely to reflect falls in demand rather than restrictions in trading, and so the data suggests that places like Crawley and Slough will find it harder to recover than places like Oxford and Cambridge.

This data reminds us that, while the economy is likely to bounce back strongly if the roadmap out of Covid-19 is uninterrupted, some places are likely to feel the effects long after restrictions have been lifted. This poses a particular question to the Chancellor as to whether he extends support for certain sectors, most notably international travel. Without any extension, the high furlough rates in Crawley, Slough and Luton will most likely convert into increasing unemployment.

A key factor in this will be whether international travel will return to pre-pandemic levels at some point, or whether Covid-19 will lead to a permanent reduction in business flights in particular. This is not clear.

A greater focus on retraining is needed

What is clearer though is that there will need to be some readjustment in these places in particular. If we assume that the scarring effects of unemployment equally apply to those people on furlough, this means that even if support is extended, keeping people on furlough indefinitely is unlikely to help future career progression. This points to a greater focus on retraining in the policy response, in particular through the expansion of the Lifetime Skills Guarantee to anyone who has lost a job during the pandemic, regardless of their initial qualifications.

Coronavirus The Future of Work Unemployment
Coronavirus Future of cities High Streets Levelling up Towns
How has the pandemic impacted high streets up and down the country?