As the general election approaches, Labour has pledged to close the gender pay gap by 2030 by introducing a stricter regulation for businesses to report pay gaps, investing in maternity leave and child care and strengthening the public sector.

The ONS recently published new data on the national gender pay gap. Accordingly, the average hourly (gross, excluding overtime) gender pay gap in the UK for all employees fell from 17.8 per cent in 2018 to 17.3 per cent in 2019.  However, cross-national gaps vary from as much as -5 per cent in Wigan to 32 per cent in Slough indicating that only focusing on a national perspective might be overly simplistic.

Differences in pay across UK cities

The national average tells us nothing about how wage disparities differ across the country and fail to acknowledge local circumstances. Consequently, looking at differences in pay across UK cities is helpful to understand how and to what degree women in different cities are affected by unequal wages. 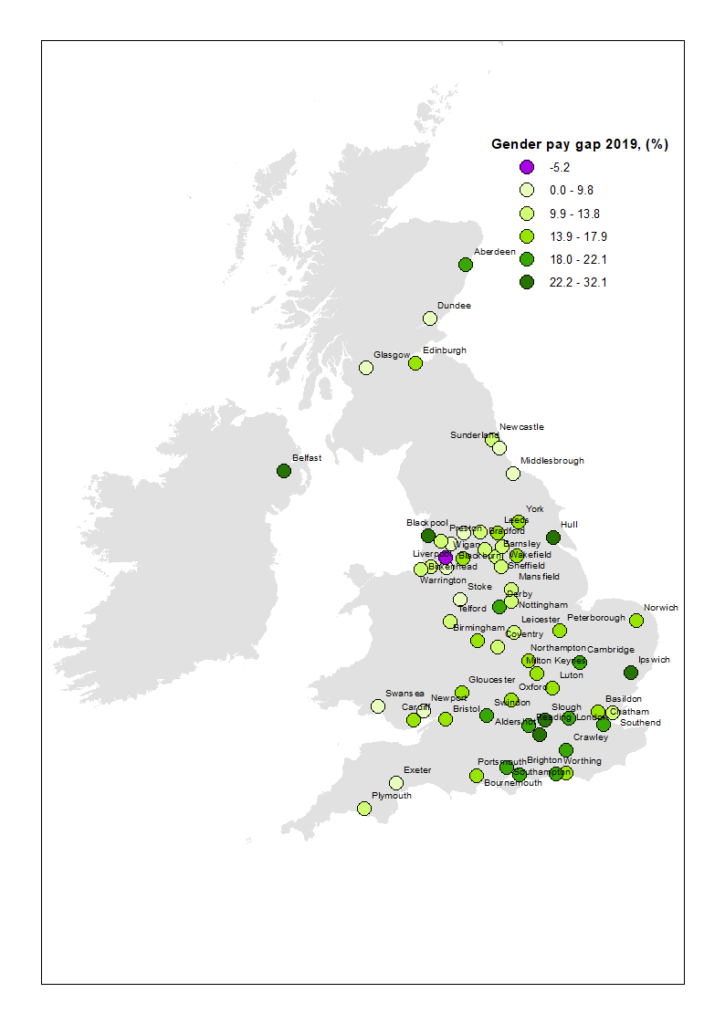 7 of the 10 cities with the highest gender pay gap are located either in the South East or East of England. As cities in these regions tend to perform economically better than cities in the North of England, economic performance seems to influence the gender pay gap in cities. In general, cities with higher average weekly earnings (e.g. Cambridge, London, Reading, Crawley, Slough) tend to have a higher gender pay gap. Blackpool and Hull stand out as two exceptions – with large gender pay gaps despite their weaker economies.

However, another factor that seems to drive higher gender pay gaps in the south of England is the bigger difference between men and women holding a managerial position. While 5.2 of men and 3.2 per cent of women in the north east hold such a position, 8.1 per cent of managers in the south east are men while only 4.4 per cent are women (data is not available below regional level).

On the other hand, 6 out of the 10 cities with the smallest gender pay gap are located in the North of England. These are: Wigan, Burnley, Warrington, Sunderland, Blackburn and Middlesbrough. Almost all cities with the lowest gender pay gaps (excluding Warrington and Wigan) have employment rates that lie below the country’s average again highlighting that weaker economies tend to have less wage inequality.

Taking a closer look at the industrial composition of the labour market in Warrington and Wigan, we see that both cities have a higher share of jobs in education, human and health activities and social work than cities with higher gender pay gaps such as Slough and Crawley. Hence, the composition of sectors in and around cities matters.

Since women are more likely to be employed in the public sector, for instance, as teachers, social workers and nurses, the gender pay gap tends to be lower in cities with a higher proportion of public sector jobs such as in Middlesbrough, Blackburn, Swansea and Glasgow.

As with many other things, national headlines can hide significant local variations. Understanding the causes of this variation, such as industrial and labour market structure, gives a better understanding of why the pay gap exists, and what this means for policy making.