Followers of Centre for Cities’ work will be very aware that the UK economy is concentrated within specific places but what about the location of emerging sectors, such as FinTech and net zero, at the frontier of the economy? Our latest report At the frontier: The geography of the new economy shows that these ‘new economy’ businesses are even more clustered within urban areas.

The extent of this is shown in the map below, which outlines the registered addresses of businesses in 48 new and emerging sectors identified by the Data City. These businesses clearly cluster in very specific parts of the country. Central London dominates but there are notable spikes elsewhere too – like the city centres of Birmingham, Bristol, Manchester and Glasgow. In contrast there are large swathes of the country where there are very few of these types of companies.

Figure 1: The UK’s new economy is clustered in its cities 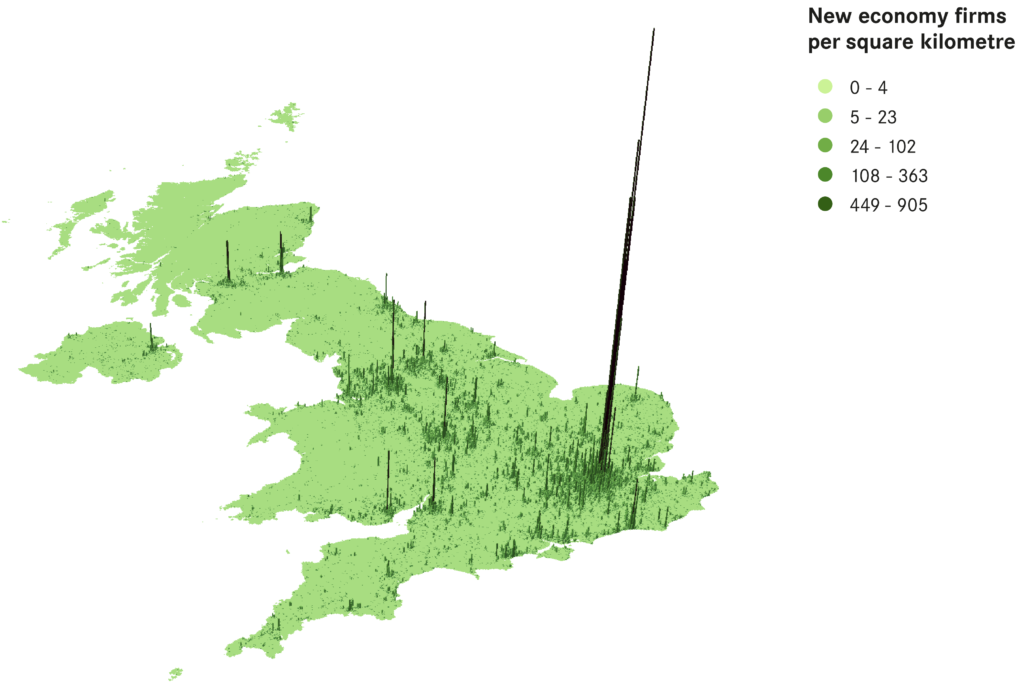 The further an area is from a city centre, the less popular it is among this cohort of businesses. Hinterlands – places within an easily commutable distance from cities – accommodate around a third of all new economy firms, and this falls to 8.6 per cent in deep rural areas. Both have a lower share of new economy businesses than companies in general, suggesting these areas hold even less appeal for firms at the frontier of the economy. For example, deep rural areas cover more than half of the UK’s land but are home to just 11.6 per cent of all businesses and 9.2 per cent of new economy firms (see Figure 2). 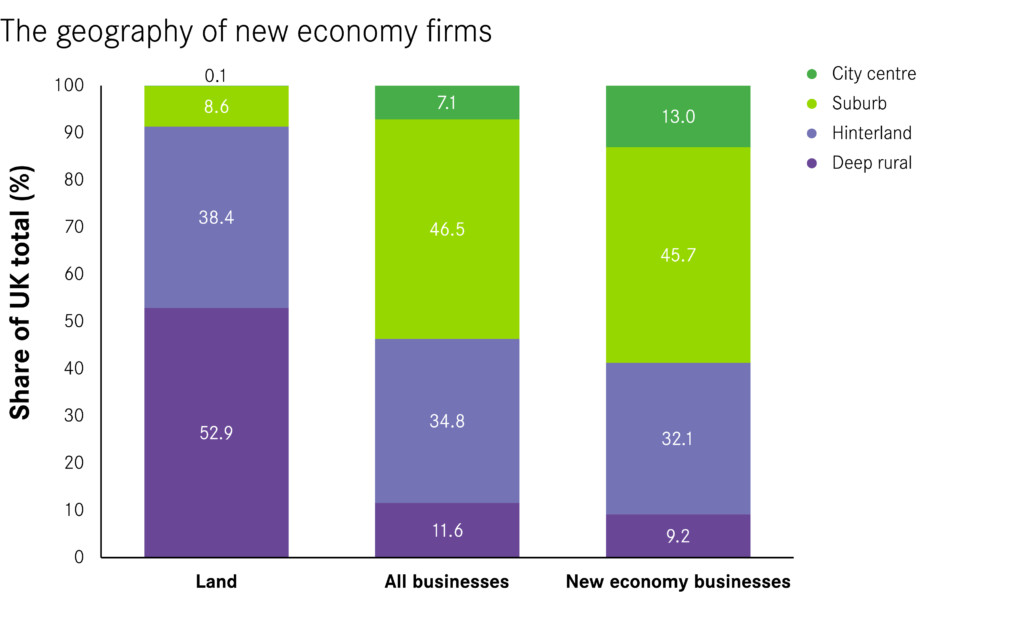 Source: The Data City, Census (2011); Centre for Cities’ own calculations.

This geography, which also plays out in other countries, results from the agglomeration benefits that cities offer – namely access to both a large number of skilled workers and knowledge through the ability to share ideas and information face to face. These benefits are likely to appeal to new economy businesses in particular because of the nature of what they do: creating and commercialising new knowledge.

Some cities offer these benefits to a much greater extent than others. Figure 2 shows that cities in the Greater South East are a particularly popular location for new economy firms. Cambridge has the most of these companies per head of working-age population, followed by Reading and Milton Keynes. Eight of the top ten are in the Greater South East. Meanwhile Sunderland has the fewest of these companies – it has a quarter of the number of new economy businesses per working age population that leader Cambridge has. It is followed by Barnsley, Newport and Wigan.

Figure 3: The new economy is especially concentrated in cities in the Greater South East 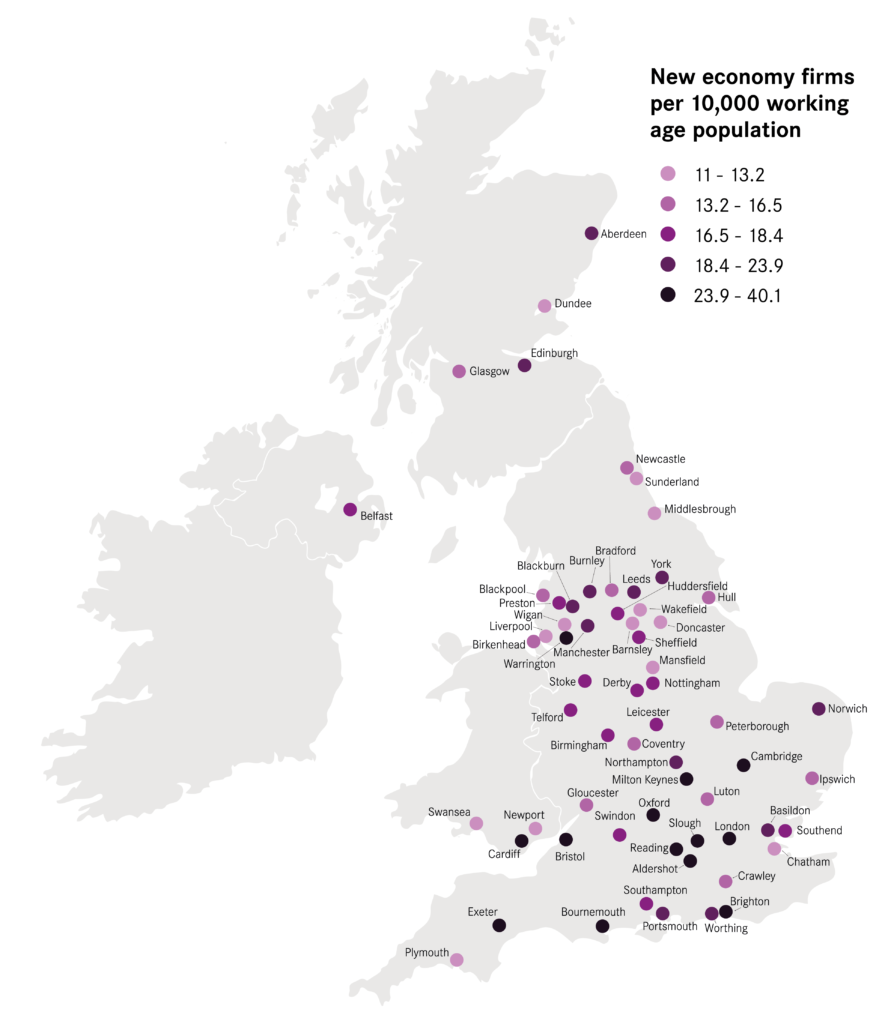 So, what does this mean for innovation policy? There is clearly a desire to increase innovation outside of the Greater South East, and Figure 2 shows why. The Government addressed this by committing to increasing public R&D investment outside of the Greater South East by 40 per cent in February’s Levelling Up White Paper. What it hasn’t done though is set some principles around how this money will be spent. The Government had intended to do so through the publication of an R&D place strategy, but eventually chose not to because, in its view, it was superseded by the Levelling Up White Paper. The problem is that the white paper didn’t actually set these principles out.

In spending the 40 per cent uplift, the Government should set out a guiding strategy that recognises two things. The first is that the geography of the new economy tells us that the creation and use of knowledge disproportionately happens in very specific places. Given this, it should target its spending rather than spreading it. The second is that it should target it on cities that have the greatest potential to take advantage of increased R&D spending. The ability of places to make the most of R&D investments when they face more fundamental challenges around skills is likely to be limited, which in large part explains the geography set out in the map above.

This does not mean that national government should ignore the struggles of places like Sunderland, Swansea and Middlesbrough but merely giving these areas more public R&D investment would not be a solution. However, the risk of doing this would be that these investments would likely have limited impact if we don’t deal with some of their more fundamental challenges first.

This report maps out the current geography of the new economy and calls for the creation of a £14.5 billion growth package to build innovation districts in Birmingham, Glasgow and Manchester.

Centre for Cities calls on Government to invest £14.5bn to build city innovation zones in Birmingham, Glasgow, and Manchester in order to kickstart the new economy.

This latest podcast episode unpacks the findings of our latest report published with HSBC UK which maps out the current geography of the new economy.

The Government should commit to a £14.5 billion 10-year innovation and growth package for Birmingham, Glasgow and Manchester.