After the storm of the local election campaign and results on 2 May, local leaders can now enjoy the relative calm of beginning to translate their manifesto commitments into a programme for government.

Jamie Driscoll is settling into his second week as the first mayor of North of Tyne (NoT). While the economic challenges facing the people, communities and businesses of NoT are pressing, Mayor Driscoll has one small luxury compared to the other metro mayors when first elected: time. He now has five years in which to build up the office of the Mayor and try to make tangible improvements for the public to judge him on in 2024.

How might his manifesto respond to the three priorities set out by Centre for Cities before the election to improve the prosperity of residents?

Mayor Driscoll did not include a vision for the city centre in the manifesto. Newcastle city centre is the driver of the city region’s economy, but it is not performing strongly enough to provide more jobs and better wages to residents across the region. It significantly underperforms cities such as Leeds and Manchester.

His manifesto promises to provide high-quality business space for start-ups in community hubs, including high-speed broadband and video-conferencing facilities. There may be demand for this, but the high price of business space in the city centre shows that the need is here. Helping more businesses to find space in the centre would create jobs where they are accessible to the widest range of workers from the region and also provide the biggest business rates revenue for the Mayor and NoT councils to invest more widely.

A strong city centre is not only good high-skilled workers and jobs. Employment rates and chances for progression for low skilled workers, two measure that the manifesto is clear on trying to improve, are boosted by stronger city centres, as the recent ‘Opportunity knocks: the economic outcomes of low skilled people in urban Britain showed (see fig 1) 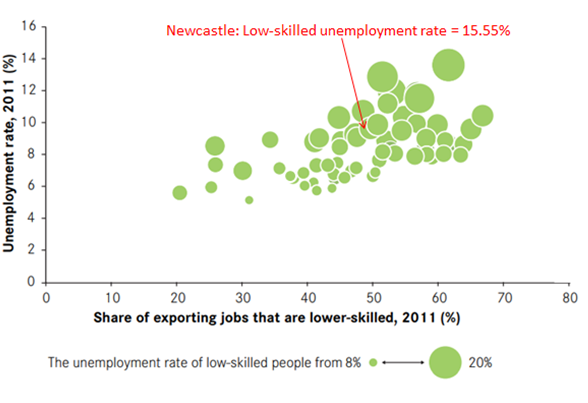 Mayor Driscoll should, therefore, set out a vision for a city centre that lets local businesses grow and draw upon the full talents of the North East to compete nationally and globally.

People with low skills in North of Tyne find it more difficult to progress onto higher wages than elsewhere in the country. Mayor Driscoll sets out a clear plan for ensuring learning does not end when formal education is finished. Plans to improve the take-up of adult education by moving the training closer to people into planned community hubs could also help.  More detail on this plan, including the likely costs as well as benefits, and how it will be piloted and evaluated, will enable the experiment to be valuable to cities across the country.

The plans for improving careers advice in schools comes with a commitment to pilot and evaluate these interventions before then deciding whether to roll out more widely. This approach should build upon the Gatsby Benchmarks for good careers advice which were piloted in the North East with the support of the Local Enterprise Partnership and which have now been rolled out across the country.  (Full disclosure: Centre for Cities is partly funded by the Gatsby Foundation).

Mayor Driscoll is clear that the North of Tyne geography cuts the city-region in half and promises to push to include the South of Tyne authorities in plans and try to bring them on board as associate members. But the history of the North of Tyne, born out of the collapsed North East devolution deal, shows how tricky this could be.

The manifesto is clear that the lack of strategic transport powers, and in particular automatic bus reregulation, is stopping the mayor from delivering the cleaner, greener and more equal economy that is his clear ambition. Unlocking those transport powers will require coming together at least at the scale of the old Tyne and Wear metropolitan county. All local leaders’ desire for the region to have these powers – and significant pots of money like Transforming Cities Fund that goes with it – held in its own hands should help push this conversation forward.

Beyond the Three Priorities

Taking a step back from where the manifesto relates directly to Centre for Cities’ economic priorities, Mayor Driscoll’s manifesto sets out a vision for a ‘prosperity we can all be a part of’, a core aim for economic and social policy that all metro mayors would share.

The headline measures in the manifesto to achieve this aim are around community wealth building – the idea that by spending more money locally this creates more jobs and higher wages. As Centre for Cities has argued previously, the more that local governments alight upon this strategy as a way of boosting growth, the smaller the positive impact will be locally, and the greater harm it will do to the national economy.

The bigger problem for the region’s prosperity is not that too much money is leaving the area, but that too little money and investment – not to mention too few people – is coming in. Focusing on bringing more money in rather than less money leaving offers a more sustainable route to local and national prosperity.

As the manifesto highlights, the warmth of the people and the beauty of the scenery are great regional assets. But without a stronger local economy, too few people and businesses decide that these benefits justify the move.