Last week, Centre for Cities held an event with leaders from government, cities, business and the bus industry to talk about how buses and bus users have been affected by the pandemic (you can watch it at this link). Here are three reflections from that discussion and its implications:

1. Buses have demonstrated that they are the essential public transport during the pandemic

Covid has shone a light on how important buses are to the public services and economy of cities. Even at its lowest during lockdown, around 15 per cent of bus passengers still needed to be at work with no other option (even as car parking in hospitals and the congestion and ULEZ charges were suspended to help key workers). For rail and tube, that number dropped to just 5 per cent, reflecting the fact that most people who catch the train to work can work from home or have access to a car, while bus users are often poorer and likely to not own a car. (See Figure 1).

Figure 1. Transport use levels during lockdown 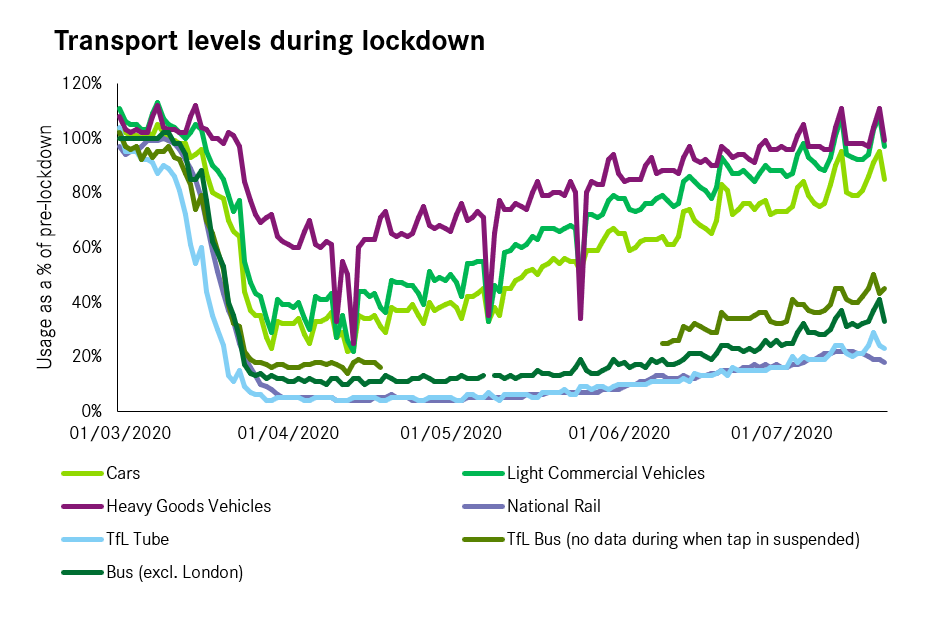 The fall in passenger numbers, meant that bus operators needed a first £167 million bailout in April to keep services running for key workers. Public subsidy has leapt from 40 per cent of bus operator revenues before Covid to potentially around 70 per cent now. Planning a core service has required operators work closely with bodies like Transport for the West Midlands. This has not been without issue – but greater public control over how public funding is used to support local transport is a step change outside of London towards the reforms envisaged in the Bus Services Act 2017.

A return to the situation where the public sector is pumping money in via different channels at different levels (concessions, bus service operator grants, subsidised services) with little co-ordination over the outcomes all this public funding creates for bus services (not to mention how it undercuts subsidised tram and train services) would be a massive backwards step.

3. The contours of an effective National Bus Strategy are clear

All parties need to use this as an opportunity to reset plans, and build a compact between central government, cities and bus operators to deliver a successful National Bus Strategy:

Congested cities like Manchester, Birmingham, Leeds and Bristol need to do two things within their control to access funding from the National Bus Strategy:

Bus operators must accept that the quid pro quo for more public funding and congestion charges in in cities that will improve the outlook for operators must be that there is greater competition within the sector. It cannot simply be a windfall to incumbents at the cost of cities and central government.

This crisis has shown how important buses are to cities as the only public transport option millions of people. The response of government, cities and operators has kept services running in extreme circumstances. But going back to normal would be a return to decline. All parties involved in providing better bus services need to set a clear vision to get cities moving again, and accept the trade-offs for each, and ensure buses play a growing role in the recovery.