Firms in different places are taking varying decisions as to how to deal with the current uncertainty. This has implications for their ability to recover as the lockdown ends.

Search the data by city or large town.

After weeks of uncertainty, today HM Revenue and Customs has finally released the first detailed data about the take up of the Coronavirus Job Retention Scheme – the Government scheme aimed at supporting businesses and preventing unemployment during this crisis.

As we suspected, the data reveals a great deal of variation in take up across the country.

Some 8.9 million workers across the UK have been furloughed for at least one three-week period since the introduction of the scheme back in March – approximately 27 per cent of the workforce.

In some places take up has been even higher. Approximately three in 10 workers in Crawley, Burnley and Slough have been furloughed for at least three weeks since the scheme was announced.

In contrast, in university towns and cities such as Exeter, Cardiff, Oxford and Cambridge, Job Retention Scheme claims covered less than 20 per cent of working residents. The table and map below give a sense of the variation in take-up between the 62 largest cities and towns in Great Britain. 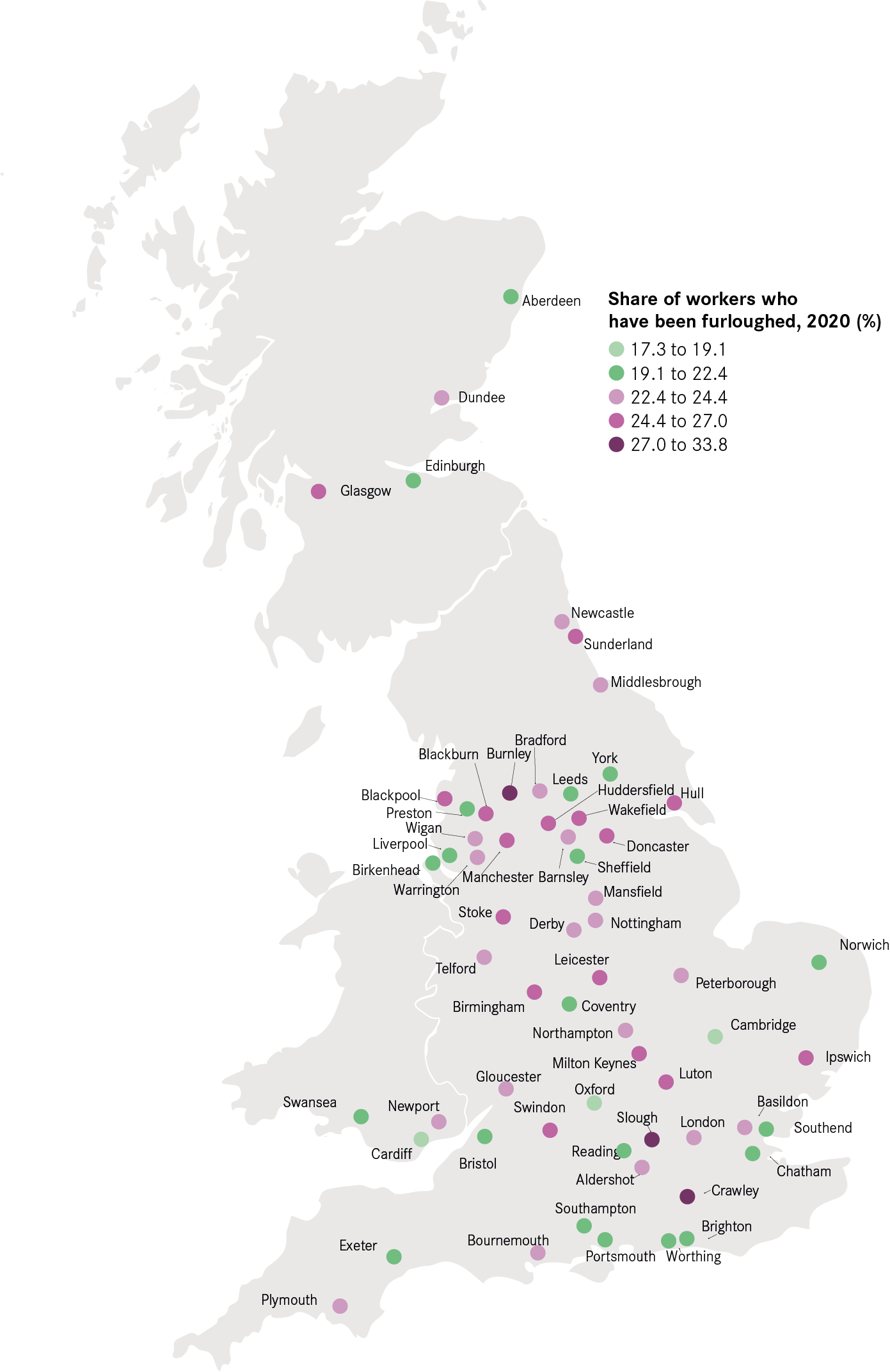 Source: HMRC data on take up of the Coronavirus Job Retention Scheme by local authority, claims received up to 31 May 2020

Interestingly, workers living outside cities accounted for a larger portion of claims. Despite accounting for 55 per cent of all people in employment, only 47 per cent of Job Retention Scheme claims at any point between March and May covered people living in cities.

Again, there is variation between different places. In Blackpool over three-quarters of eligible self-employed people claimed support through the scheme, the highest share among the 63 largest cities and towns in the UK, followed by Wigan and Plymouth. On the other hand, in Oxford, Cambridge and other southern cities, only two-thirds of eligible self-employed people applied to the scheme.

Firms in different parts of the country are taking different decisions

Variation in the take-up of the Job Retention Scheme and Self-employment Income Support Scheme were to be expected. Coronavirus is affecting some sectors more than others, and, as we showed back in April, this means that cities more reliant on sectors such as aviation, hospitality and leisure, will very likely be hardest hit.

However the variation we currently see reveals a worrying picture: despite having the same tools to protect their workers, firms in different parts of the country are taking different decisions when it comes as to how to weather this crisis.

To capture this, we used a slightly different measure: we looked at the total number of claims for the Job Retention Scheme, Self-employment Income Support Scheme as well as at the increase in Claimant Count from March 2020 as a share of the working age population of a place.

According to this measure, the Job Retention Scheme accounts for the bulk of the support to people: nationally, over two-thirds of claims came in the form of Job Retention Scheme, approximately 15 per cent as support for the self-employment while claimant counts accounted for less than 10 per cent of all claims.

This is true everywhere in the country – but the balance between the different schemes vary considerably from one place to another and this is what is most concerning. In Crawley, claims for Government support affected 35 per cent of the working age population, but of these claims, 78 per cent were for the Job Retention Scheme, 16 per cent for self-employment support and fewer than 6 per cent for unemployment benefits. A similar picture is visible for other southern cities with strong economies.

Source: HMRC data on take up of the Coronavirus Job Retention Scheme by local authority, claims received up to 31 May 2020, ONS, Claimant Count, ONS, Population Estimates 2019.

These differences matter as they tell us about business confidence in different parts of the country and can hint as to how quickly different places will be able to bounce back once the lockdown is over. They also tell us that how the Job Retention Scheme and Self-Employment Income Support scheme will be phased out will have a different impact in different places.

Today’s release is a very welcome development from the Government, a central piece of the jigsaw to understand how Coronavirus is affecting different parts of the country. What the Government must do now is use this data to inform the phase out of the support it has put in place and lay out a recovery plan that is reflective of different parts of the country’s needs.

The data as released appears to confuse data for Nottingham and Rutland, which we have corrected for in this analysis. We have raised this issue with HMRC and will update this research with any new figures made available.